Aliens: Fireteam Elite Review – In Space, No One Can Hear You Snore 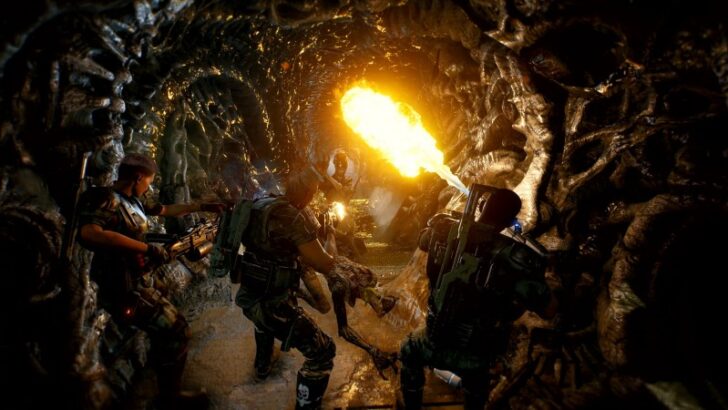 The acid-spewing Xenomorph has haunted the dreams of hardcore sci-fi lovers since its iconic first appearance in Ridley Scott’s Alien. Despite the skulking creature’s success on the silver screen, its video game adaptations have been less consistent. For instance, Colonial Marines’ tired shooting mechanics and bug-riddled environments created a lackluster experience, while Isolation emulated the gripping unease of the franchise’s best movies. Aliens: Fireteam Elite tries and often fails to establish itself in the middle ground. The environments – dimly lit corridors and abandoned caverns – sell the atmosphere, but uninspired A.I. and repetitive mission design ultimately do more harm than your average chestburster.

From the jump, you create an avatar, choose your favorite class, assemble an alien-slaying loadout, and set out alongside two players (or bots when playing solo) to take down some Xenomorph menaces. Fireteam Elite’s unremarkable plot takes place throughout four consecutive campaigns. Evil conglomerate Weyland-Yutani is unsurprisingly back at their nefarious antics, sacrificing innocent human lives for unethical alien research. Your task force is sent to the outer colonies to deal with the fallout. Sadly, there are no exciting twists or turns. If you’re a fan of the series, you’ve come across the illegal-experiment-gone-wrong trope more times than you’d care to remember.

In every firefight, numerous Xenomorphs or rogue synthetics fill the screen, clambering over one another – from pesky facehuggers and tool-wielding “working Joes” to 7-foot tall, bipedal Praetorians and heavy-infantry androids. Staff sergeant Herrera, the aggressive voice in your ear, oversees your progress through each campaign, but her directives and each mission’s overall level design, never change. Sure, you might traverse the awe-inspiring remnants of Prometheus’ ancient humanoid civilization (a nice break from the first mission’s dull storage bays and metallic hulls). However, your orders remain to advance upon a point of interest, activate a console or place a scanner, and hunker down amid incoming swarms while navigating linear maps. Rinse and repeat. Setting fortifications like sentry turrets and mines help alleviate the repetition, but Fireteam Elite has no intention of surprising its players or experimenting with its typical shoot-from-cover mechanics.

Your marine’s personality is disappointingly nonexistent, and character customization is a cosmetic tag-on. Thankfully, classes add an important strategic component to the action. Each class comes equipped with two abilities and weapon specializations that can alter the flow of combat. Additionally, you can swap onto different roles during mission prep. The Doc’s “Trauma Station” heals the entire squad in a small radius and works like a charm in narrow passageways while the Demolisher’s assortment of heavy weapons, like the “smart gun” and flamethrower, dole out serious punishment and are helpful when things get dicey. I enjoyed leveling up my favorite classes to unlock rare perks like extended ability durations, which came in handy when selecting harder difficulties.

Managing abilities and securing different angles while also watching teammates’ backs created moments of thick tension. It’s too bad that those moments are few and far between. While enemies come from many different directions, each gunfight plays the same way. This is indicative of Fireteam Elite’s larger issue: monotony.

After reaching a checkpoint, you can return to your base of operations – an empty hangar, save for a smattering of forgettable, lore-dump NPCs – to purchase new weapons, attachments, perks, consumables (like elemental bullets), and other gear. You can also buy challenge cards that make missions harder for the added benefit of amassing a more significant fortune. When nearing the end of the campaign, I appreciated those challenge cards and used the funds to buy better mods and perks to meet the higher “combat rating” requirements of the final assault. On the other hand, this also meant that I spent time grinding through previously beaten sections. And with no variances in the gameplay, this got old quickly. There’s no avoiding this grind; you’ll have to backtrack more than once to complete the entire campaign since experience points and money don’t grow on trees.

Weekly objectives called “Tactical Opportunities” dish out some extra currency for completing miscellaneous tasks like running a certain class or eliminating enemies with specific weapon types. Still, the payout isn’t worth replaying carbon-copy missions. What’s more, once the campaign is over, horde mode is finally unlocked, which – you guessed it! – reuses the locales and mission goals that you’ve already cycled through multiple times.

Aliens: Fireteam Elite occasionally fires on all cylinders, especially during battles. Xenomorph and synthetic limbs tear at you as you buffet them with high-energy bullets. The carnage produces pools of acid blood that deal extra damage if you don’t watch your step. Even Austin Wintory’s dissonant score and the array of nostalgic sound effects – particularly the whirring pulse rifle and thudding footsteps of approaching drones – help immerse you in the Alien universe. Unfortunately, there’s not enough interesting or entertaining content to parse through, and the grind gets tedious. Developer Cold Iron Studios promised a year of post-launch content, but unless substantial changes are made to the loop, you’re better off steering clear of this messy infestation.

The troubles of flying solo

Aliens: Fireteam Elite’s A.I. co-op partners, Alpha and Beta, are significantly inferior to human allies. On casual, your numbskull allies pack a punch, but as you ramp up the difficulty, their stopping power plummets. Certain Xenomorph/synthetic variants are nearly impossible to defeat alone, so you’ll need to rely on your companions. To make matters worse, Alpha and Beta are limited to grenades, so don’t expect them to activate any buffs or heal you when you’re in the red. Those robotic jerks also tend to ignore you when you’re downed, bringing all that campaign progress to a blistering and heart-wrenching halt.

Summary: Aliens: Fireteam Elite occasionally fires on all cylinders, but a monotonous gameplay loop bogs down the entire experience.

Concept: Shoot your way through a growing brood of Xenomorphs while unearthing the immoral schemes of a notorious megacorporation

Graphics: Character models are nothing to gawk at, although the scale and look of ancient archeological dig sites and alien spacecraft is impressive

Sound: Fans of the series should recognize the satisfying symphony of bullets and bone-chilling, guttural screeches from the films. Sometimes the low warble of the music can be mistaken for ambiance, but it more than rises to the occasion once the bullets start

Playability: Firing weapons remains at the core of Fireteam Elite’s combat, but class abilities, such as buffs and heavy ordinance, steal the show