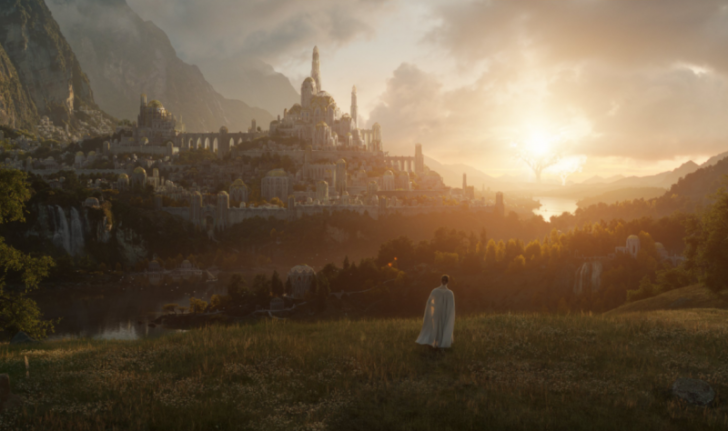 After so much silence, we finally have our first (small) look at Amazon’s Lord of the Rings TV series, as well as when we can expect to watch it. The show, which has yet to reveal the official title, is slated to premiere on September 2, 2022. While we don’t have a trailer to feast those eyes on, we do have an image teaser that seems to be our first look at the kingdom of Númenor.

The break of silence happened via a short and simple tweet from the Lord of the Rings TV series Twitter account. With a teaser image and release date for the pilot, “a new journey begins” is only the start of us learning more about Amazon’s take on the beloved Tolkien universe.

According to TV Line, filming season one has officially wrapped up in New Zealand as of this week, bringing us just one step closer to seeing what the series adaptation will have to offer fans of this fantasy world. Based on Tolkien’s fantasy trilogy, the TV series will take place within the Second Age. For those familiar with the Lord of the Rings and The Hobbit films, that means this series will take place thousands of years before the time of Frodo and his pals. Intending to confront “the long-feared re-emergence of evil to Middle-Earth,” which is Sauron, if that wasn’t obvious, the upcoming TV adaptation aims to deliver a familiar-yet-new experience to hardcore Tolkien fans while offering an immersive fantasy journey for newcomers just now joining the fray.

Though Amazon did not say what the image is about, nor the character seen in it, many feel that the landscape seen is none other than the kingdom of Númenor. Númenor was a kingdom of Men that emerged from the sea towards the beginning of the Second Age. An island in the Great Sea, the history of Númenor is one that saw an apex of strength and a fall that remains a mystery regarding if it’s lost forever beneath the sea or if it was recovered (not unlike Beleriand) as seemingly suggested by the final musings of Galadriel to Treebeard when they parted ways at Isengard. The trees, however, make us think Valinor.

We’ll be learning more about the upcoming series in the coming months, but regarding what we do know? We know that the cast of the Lord of the Rings TV series includes the likes of Cynthia Addai-Robinson, Owain Arthur, Ismael Cruz Cordova, Charles Edwards, Robert Aramayo, Maxim Baldry, Markella Kavenagh, Joseph Mawle, Lloyd Owen, Dylan Smith, Leon Wadham, Benjamin Walker, Sara Zwangobani, Sir Lenny Henry, Ema Horvath, Tyrone Muhafidin, and Sophia Nomvete. Regarding who is leading the charge, R.D Payne and Patrick McKay are the series’ showrunners alongside Christopher Newman as the producer and Charlotte Brandstrom as the director.