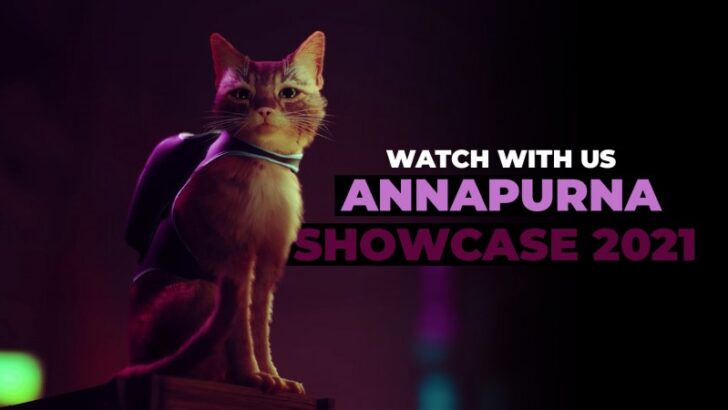 While it may not have the AAA-clout of a Microsoft or Sony, publisher Annapurna Interactive has been able to translate its understanding of storytelling in cinema and convert it for a more interactive audience. Whether you’ve realized it or not, the group is responsible for arguably some of the best indie games of the last few years, including Florence, What Remains of Edith Finch, and Kentucky Route Zero, to name a few. But now it feels like the publisher is just getting started with a very exciting slate of new indies just around the corner.

This brings us to today. Annapurna Interactive is hosting its 2021 digital showcase, and we’re going to be there with you live! The show kicks off at 2 p.m. CT, but we’ll be starting the fun 15 minutes earlier to discuss what we’re excited to see from the day’s announcements and trailers. But who’s we, and why should you tune in? We’ve assembled an exciting duo of Alex Stadnik and Dan Tack for the day’s festivities, so we hope you’ll join us over on Twitch!

In a refreshing change of pace, we do know some of the games we’ll be seeing today. Stray, the game where you play as an adorable cat in a cybernetic city, is finally set to make another appearance, and we can’t wait to find out what exactly this game is. Developer Heart Machine has also tweeted that fans of the upcoming Solar Ash won’t want to miss today’s showcase, so it’s safe to assume we’ll be seeing more from one of my most anticipated indies of the year. Combine those games with looks at Neon White, The Artful Escape, and hopefully some surprises on the way, and we should be in for one hell of an exciting ride.

Excited about today’s showcase? If you love all things Annapurna, we have you covered, as our own Liana Ruppert recently reviewed the publisher’s latest title, Last Stop. If that’s your jam, she also wrote a companion piece discussing the philosophy behind the game that shouldn’t be missed for those interested in diving in.