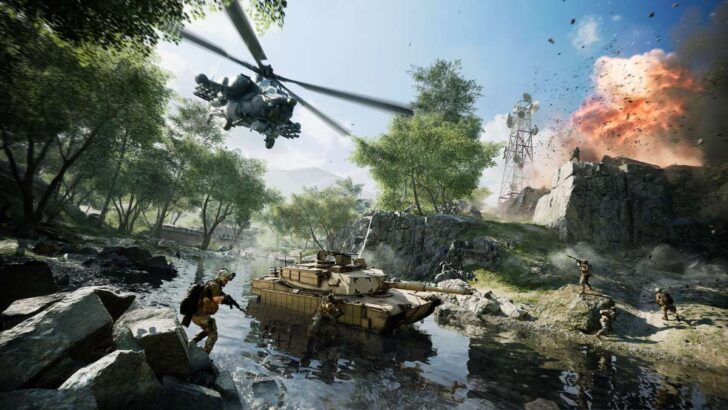 The Battlefield series has a long history, both in reality and in-game. Over the course of the nearly 20 years the venerable shooter franchise has been around, players have experienced conflicts spanning from World War I (Battlefield 1) to over a century in the future (Battlefield 2142). It might feel like you’ve seen it all, but the Battlefield team has one big surprise up its collective sleeve. With the upcoming release of Battlefield 2042, the developers are putting more power than ever before in the hands of players. Thanks to a new feature called Battlefield Portal, fans will be able to build, share, and discover amazing brand-new Battlefield experiences

Battlefield Portal is being referred to by Electronic Arts as “Your Battlefield, Your Way” and it shows. At its core, Battlefield Portal gives players the opportunity to combine elements (including weapons, vehicles, classes, and much more) from four different Battlefield games to create a wholly new experience. But it goes so much deeper than that. You’ll be able to tweak nearly every element of the experience thanks to a robust editor, then share those experiences with other Battlefield fans. It would be easier to call this user-generated content, but that’s underselling it.

During a recent event, we got a closer look at Battlefield Portal, watching as the developers set up a battle between WWII-era solders from Battlefield 1942 and futuristic soldiers of Battlefield 2042. As if that wasn’t cool enough, we watched as a bunch of soldiers armed only with knives took on a bunch of warfighters equipped solely with defibrillators. If you’ve ever played the “who’d win in a fight” game, this is the experience for you.

Each of these maps will support up to 128 players on Xbox Series X|S and 64 players on Xbox One. What’s more, all of the old maps are reimagined and updated with new technologies to bring them into the modern era. For example, Battle of the Bulge now has destruction of buildings, while Arica Harbor has a low tide that changes the battlefield during a match.

Basically, Battlefield Builder is a web-based platform that allows creators and players to build anywhere. The team felt that it was important to make it web-based, as that would allow them to patch or update it on the fly and would give more people the opportunity to use it. Struck by inspiration on the bus? Add it to the experience! Battlefield Builder will feature an easy-to-use standard editor and more in-depth logic editor that’s more akin to coding.

While you can build your own game mode from scratch, Battlefield Builder also features plenty of existing game mode templates (including Team Deathmatch and Conquest) that you can tweak and adjust to your liking. As an example, our demoer shared a Snipers vs. Shotguns gametype that he’d been working on. There are three different game elements that you can adjust: Mode, Series, and General.

In the Mode section, you’ll be able to choose the base mode as I mentioned above, as well as the map you want to play on. In the Settings tab of this section, you can change the number of players (both overall and per team). You’ll actually be able to create asymmetric teams, allowing you to do things like make a single player uber-powerful while battling 127 weaklings.

Next up was the Series section, where you can choose the games to pull teams and factions from. You might want to try BF1942 vs Bad Company 2, or choose factions like Germans vs US, where everything associated with that faction will be in the game. You can also toggle certain classes on or off, allowing for medics to finally show why they are superior to engineers. This is also where you can select which weapons will be in the game, as well as which attachments are supported. Iron sights only, anyone?

Finally, there’s the General section, which is where the real fun happens. Whether you’re toggling friendly fire on or off for either team or giving them headshot or body shot multipliers, there’s a lot you can do here. You can also set abilities for each team, such as whether they can sprint or go prone, or if they’re able to use their compass or minimap. One of the most interesting setting was for AI combatants. Not only can you turn AI on for both sides to sit back and watch how things play out, you can even turn it on for one side to make it a PvE experience.

For the hardcore creators, there’s also a logic-based Rules Editor that’s closer to coding or scripting, allowing for very granular rulesets. For example, you can set it so that if a player gets a headshot kill, their health goes back to 100%. This is a very basic example, and it looks like the Rules Editor is robust enough to allow dedicated player to craft some pretty wild scenarios.

Battlefield Portal looks like it’s going to make for a lot of really memorable experiences that will only get better as more creators spend time with it. If what we saw is any indication, you can be sure that this is only the beginning.

Battlefield 2042 is available now for pre-order and is set to launch on October 22 on Xbox Series X|S, Windows PC, and Xbox One. Xbox Game Pass for PC and Ultimate members with EA Play memberships can also pre-order at a 10% discount. As if you need more incentive, players who pre-order the game will receive early access to the Open Beta.

Related:
Conquer the Next Generation This October in Battlefield 2042 for Xbox Series X|S
Build Your First Level in Levelhead with These Tips and Tricks