Become a Space Pirate and Fight Demons in Madness Beverage 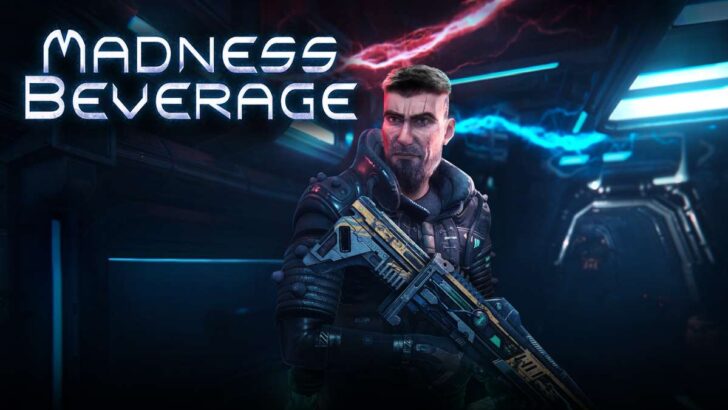 Madness Beverage premieres today exclusively on Xbox One and Xbox Series X|S.This old-school, first-person shooter takes the player on the journey through space.Take on the role of a space pirate, re-open the gates of Hell, and put demons back where they belong.

Your battle against evil forces begins today in Madness Beverage, the single-player, old-school shooter launching exclusively today for Xbox One and Xbox Series X|S. We’re very proud of the game’s final shape after working on it for a long time. In this post, we would like to give you a little sneak peek of the pirate’s journey and a preview of what you can expect to see in our game.

At the beginning of the game, Caleb (the game’s protagonist) receives a strange message through his radio. He learns that evil Manos unleashed the demons and closed the gates of Hell. Now these unholy beasts are free to roam the planets. As if that’s not horrific enough, if you get killed, you become one of Manos’ demonic slaves as well. We wanted to create a sci-fi game that takes its roots in old-school shooters, so players can prepare for a campaign full of shooting demons, unlocking weapons, and boss fights. Madness Beverage takes place in space and gives the player a chance of becoming a space pirate but not just any pirate. We wanted Caleb to be the kind of guy who fights demons not because he’s heroic, but because he thinks they’re bad for his business. He’s not your typical hero.

There are a few locations that players will visit throughout the game. Some are pretty typical for this genre: Players will have a chance to explore the wildlife of an alien world, old castles, the secret laboratories, and lava caves that were once believed to be the home of dragons. You will learn more about these locations and how they look like in the game itself. For now, all you have to know is that the game will take you to many dark, shady-looking places. You will have to be cautious if you do not want to be eaten alive, or burned to a crisp, or turned into a demon, or… just try not to die. It will not be easy, that is for sure, but if you stash away valuable pickups and collect Madness Drop, you might end up just fine. Search for Madness Drops and use them to create powerful drinks that will help you out on your quest. We are very excited about this feature, so let us take a closer look at our drinks.

Each beverage has its distinctive color: purple, orange, red, blue, yellow, or green. Some of them are so strong, using them feels like cheating. Orange beverage lets you see your opponents through walls and the red one makes you incredibly powerful – you can deal up more damage to your enemies when you use it but be careful. Nothing is ever that easy. You may suffer some consequences after using our beverages. Some are very toxic, some will make you see fake phantoms, but only with their remarkable effects will you be able to make your way through the hordes of monsters. Use them wisely, beat as many demons as possible and do not forget to save some for the boss fights.

These are just a few of the many captivating elements of Madness Beverage. If you love old-school shooters imbued with a little bit of humor as much as we do, you are in for a real treat. We hope you’ll enjoy moving through different locations in search of the Madness Drop and shooting demons on your way as much as we enjoyed making the game. Thank you for taking the time to read this post. Follow @BlueSunsetGames and @ConsoleLabs on Twitter and Facebook for the latest news on Madness Beverage.

☆☆☆☆☆
7
★★★★★
$18.99
Get it now
Fight Manos’ demons
Become a space pirate and fight demons that were set free by the evil villan Manos. Travel through alien planets, forgotten caves, old castles and its dark corridors, and remember, be wary of what’s lurking in the dark! To defeat Manos you’ll have to survive demonic hordes and collect powerful drinks! How can you achieve that, you may ask? With the whole arsenal of deadly weapons and strong beverages that give you some real special powers!
Visit Space Market
Kaanatan is a popular space market set in the center of the galaxy. This is the place in which all of the mercenaries, thugs and even dignitaries live and trade, so it’s no wonder that you can find a lot of stuff here. No matter if you come here in the broad daylight or at nighttime, you’ll be in for a treat. Find Caleb’s friend, Xeos and have him prepare some magical beverages for you!

Find Madness Drop
Investigate the source of the radio signal in an old castle on Neo Valkyria, discover the secrets of a suspicious looking laboratory, explore Alien World with its intriguing wildlife and try not to die in flames while on a mission in Lava Cave. Legends say it was a home of dragons once upon a time. But it’s just some old legends, right? Why don’t you find out if there’s any truth to them? Grab Madness Drop and continue your adventure through space!

Pick your poison
Purple, orange, red, blue, yellow or green… We have all sorts of beverages for you and every single one of them has its own unique power. Do you want some space? Inflict damage and push your enemies away from you with Purple Beverage. Protect yourself, slow your enemies, watch them through walls, move faster and become incredibly powerful, but be careful… Sometimes with great power, comes a price.

Related:
Retro-Styled Platformer Castle of Pixel Skulls is Available Now
Clone Drone in the Danger Zone is Available Now for Xbox One and Xbox Series X|S
Death Lurks Nearby in the First Major Updates for Outbreak: Endless Nightmares