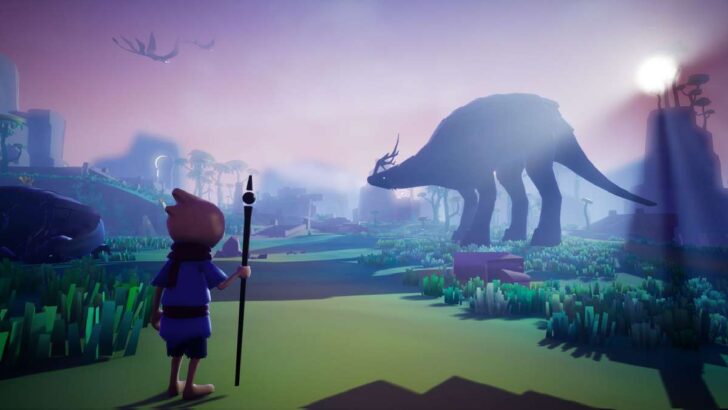 Hello again, adventurers! After 5 years of sitting in my office all alone, hammering away at my keyboard, it feels very surreal to finally be able to say that my very first game, Omno, is out now on Xbox One and Xbox Series XIS and with Xbox Game Pass for Console and PC.

For those of you who have never seen it before, Omno is a single player adventure game where you play as a pilgrim making your way through an ancient world of wonders on a quest to find a mythical gate of light. It’s a game of exploration and traversal, where you’ll have to use platforming and puzzle solving skills to make your way through each world.

You’ll acquire new abilities as you progress, each one a celebration of the joy of movement – whether that means dashing over sheer drops, surfing over sand dunes or gliding through the clouds. Omno is also designed to be a calm, gentle experience: there’s no combat, and instead you’ll find yourself interacting with all of the strange and fantastical creatures you encounter, with each one rewarding you for your friendliness and curiosity, often in surprising ways!

Omno started as a dream for me many, many years ago, and to see it sitting on the Microsoft Store and alongside some of my all-time favorite games in the Xbox Game Pass catalog still feels like a dream to me. As a first-time solo developer, the imposter syndrome is very real right now, but I also feel very proud to have finally gotten this thing over the finish line.

There are a lot of great games launching every week right now (and I’m looking forward to having the time to play some new games again myself!), but I really hope that some of you will find the time to try Omno. I’m both terrified and very excited to hear what people think of it!