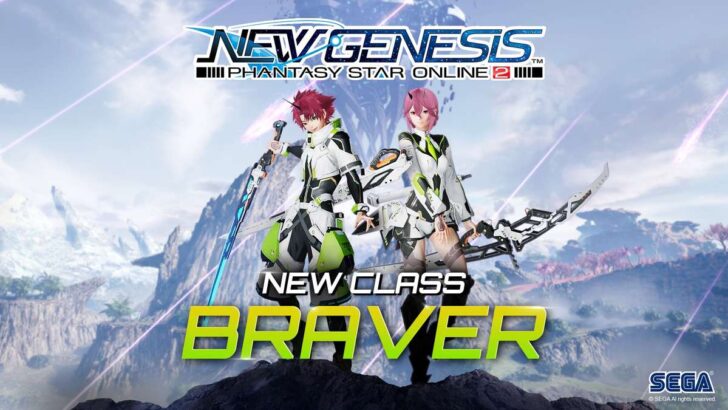 If stylish slashing and lightning-fast archery are your thing, then you’re in for a treat with the introduction of the Braver class in Phantasy Star Online 2 New Genesis! This class can use the Katana and Photon Bow interchangeably, allowing them to adapt on the fly to changing battle conditions. Their class skill, Brave Combat, is perfect for the thick of battle, as it reduces PP consumption and increases PP recovery while attacking for a short amount of time. So, if a Bujin is really pressing you, activate Brave Combat to ensure you’re fully powered!

Each Braver weapon has its own collection of Photon Arts, or attacks, that are tailored for the Braver’s style. The Photon Bow allows the use of Frenzied Firework, which fires a shot that explodes upon contact with an enemy, showering them and nearby foes with a spray of arrows. When charged, this Photon Art skips the long-range tactic and instead showers those in the Braver’s immediate vicinity with deadly arrow spray.

The Katana shows the Braver’s true mastery of the blade, as successive attacks with the same Photon Art unleash slight variations. Chaining these attacks together results in a whirlwind of deadly destruction for the enemies of ARKS. One notable Photon Art in their arsenal is Iris Gale, which cleaves nearby enemies with devastating force.

The skill tree of the Braver is full of skills that further enhance their already deadly arsenal. Brave Combat gains additional benefits, such as Brave Combat Final Bonus, which recovers your HP and PP according to your hit count while the skill was active. Tracer Arrow adds a homing ability to arrows released with the normal attack of the Photon Bow, and Katana Guard Counter automatically unleashes a counterattack after executing a Perfect Guard by using the Weapon Action. Finally, the Skill Fearless Attitude neutralizes incoming frontal attacks after you release a Photon Art or normal attack, and automatically follows up with a counterattack.

The Braver fluidly mixes offense and defense, seizing on opportunities provided by enemy attacks and relentlessly following up with a shower of blades or arrows. This fast-paced and nimble Class provides an exciting ride through Phantasy Star Online 2 New Genesis and we heartily encourage you to give it a try!

This new adventure takes place on a vast open field! Up to 32 people can enjoy the adventure in a new world with beautifully-evolved graphics!

The simple and intuitive controls developed in the series up to now have also evolved! A new dimension of battle with a variety of powerful enemies awaits! The new actions Photon Dash and Photon Glide allow you to traverse across the vast open field with ease!

Of course, the ultimate in character creation has also evolved. Create your own main character that will be unique throughout the world, and head out to a new adventure!

・The core game is Free-to-Play, but there is certain paid content that can be purchased.

・The Phantasy Star Online 2 New Genesis game that can be downloaded with this content is the same as that included in other editions. You do not have to download this if it is already installed.