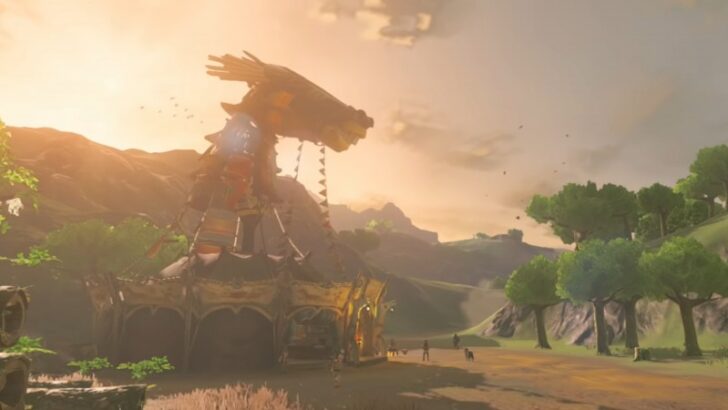 “Does this do anything?” is one of my favorite questions to ask while I’m running around a video game world. A lot of the time, the answer is no. But I keep asking because every so often, I find a game that rewards my curiosity in the best ways. Recently, Acid Nerve’s Zelda-like Death’s Door earned a spot on that list of games for one small, but delightful gag where cutting a sign in half affects both the physical object you attacked and its corresponding pop-up dialogue bubble. This is such a fun detail that doesn’t need to be in Death’s Door, but it is, and the game is better for it. This fun homage got me thinking about the joke’s inspiration, The Legend of Zelda, and how great the series has been at creating these kinds of interactive moments, especially its latest entry, Breath of the Wild.

As an open-world game, Breath of the Wild is centered around exploration. That exploration isn’t limited to simply allowing players to climb every mountain in view – though to be clear I did try to climb every mountain in view – the game’s physics system gives players agency to tackle challenges in extremely unique and unprompted ways. The first taste of this Breath of the Wild-style freedom involved a boulder and a whole camp of unsuspecting Bokoblins.

There was technically no in-game messaging encouraging players to try to push a large stone off its perch above the camp, but who could ignore that nagging question, “does this do anything?” And man did it do something. RIP Bokoblins. Breath of the Wild is filled to the brim with these kinds of moments and it was, rightfully, praised for its mechanics when the game was released. With a Breath of the Wild sequel approaching, I hope we see more. Judging from what we saw of the game’s lofty setting and new abilities, like Link moving through solid stone, there are a lot of opportunities to play around with.

But Breath of the Wild isn’t the only game with new content on the horizon I want to see embrace this emergent brand of fun. One of my favorite surprises in recent memory occurred in Ghost of Tsushima, which has a Director’s Cut complete with the Iki Island expansion coming in August. The game has a selection of touchpad-based gestures, one of which, called respect, prompts the protagonist, Jin Sakai, to bow. At first glance, it doesn’t seem to do anything practical. Of course, for role-players like me that see Jin as a highly courteous ghost-in-training, the polite gesture is essential, and I use it a lot. To my utter delight and surprise, the world sometimes reacts to it.

My initial, and most impactful, memory of this happening occurred when I decided to pay my respects to the statue overlooking the Golden Temple and magical butterflies poured out into the air around me. There is no sign by the figure asking you to bow like in other locations, I just tried it on a whim. The astonishing swirl of creatures that greeted my impromptu gesture not only made for a fantastic picture but also made me feel like I could affect the world. It wasn’t a game-changing development, but it gave me a sense of wonder and a compelling reason to engage with the environment. I would love to see bowing unlock more than simple reactions in the upcoming expansion. Maybe the gesture could be the key to unlocking a secret or two. I also wouldn’t say no to additional gestures.

There are a lot of things I want to see from the Breath of the Wild sequel and Ghost of Tsushima’s Iki Island expansion. Will the next Zelda title alter its predecessor’s controversial weapon breaking? What will the new storyline reveal in the samurai adventure? Story and mechanics are important parts of a game, but tiny moments, like an unexpected ring of butterflies or a cleverly decimated enemy camp, can be even more memorable. More games should reward players for being invested in how their actions change the game around them, and the ones that already do can only improve by expanding those rewards. I’m sure there will be plenty of big things to love about both titles when they come out, but you know I’ll be off hunting for more of those emergent experiences.