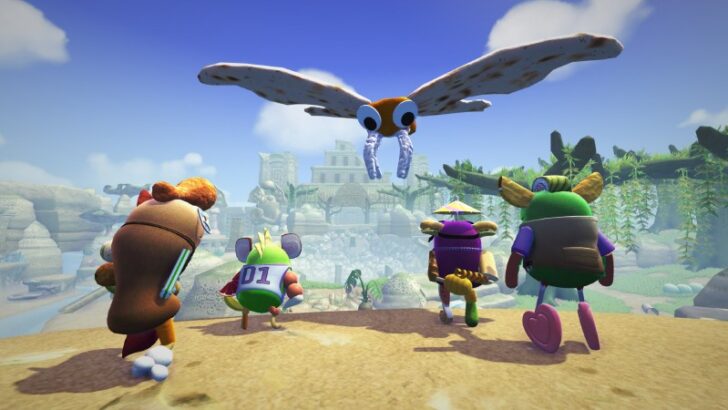 Bugsnax, the Young Horses console exclusive for PlayStation, will hit Switch and Xbox consoles on April 28.

Previously released in 2020 on PlayStation 5, PlayStation 4, and PC via the Epic Games Store, Bugsnax and its upcoming DLC, The Isle of Bigsnax, which we think is shaping up to be a great time after a recent preview of it, will hit Xbox Game Pass the same day it launches on Xbox and Switch. If you don’t have Xbox Game Pass, though, or wish to play it on Switch, you can purchase Bugsnax on launch day for $24.99 with a 20% discount. Furthermore, across all platforms, additional trophies and achievements have been added to the game as part of its Isle of Bigsnax DLC.

The Isle of BIGsnax update launches April 28th FREE for all Bugsnax players!

For the uninitiated, Bugsnax is a mystery exploration game with Pokemon Snap-like elements that see you capturing unique bugs that look like edible snacks in a variety of ways. It features a great voice cast, one of the catchiest theme songs in gaming, and more. Young Horses says The Isle of Bigsnax campaign includes “3 to 4 hours of new story content with Yuri Lowenthal, Casey Mongillo, Debra Wilson, and Haviland Stillwell returning to voice their respective grumpuses – and new exciting Bugsnax and mysteries to discover.”

On top of that, Young Horses says new mail quests have been added to the base Bugsnax island alongside new hats to acquire and your very own hut to decorate and call home. To help celebrate the release, iam8bit has revealed that a “super-sized two-disc LP” vinyl that includes 25 tracks from Seth Parker’s Bugsnax score will soon be released.

Young Horses says the base Bugsnax campaign takes about seven hours to complete. Couple it with The Isle of Bigsnax, and you’ve got nearly a dozen hours of Bugsnax content to consume on Switch and Xbox consoles when it finally hits those platforms on April 28.

In the meantime, read Game Informer’s Bugsnax review and then check out our thoughts on The Isle of Bigsnax DLC after going hands-on with it recently for a preview.

Are you excited for The Isle of Bigsnax DLC? Let us know in the comments below!