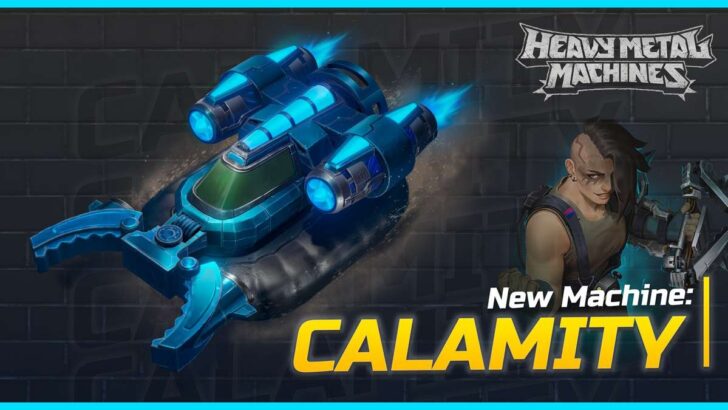 Hoplon Studio here, from Brazil. We’re thrilled to announce that a new machine has just arrived in the arenas of Heavy Metal Machines! Meet Calamity, the Bomb Stealer!

Calamity’s role is to transport the bomb to the enemy base, and she has weapons never seen before in the arenas — she can steal the bomb from other machines!

Her Passive ability is called “The Power of the Bomb.” She grew up so close to the bomb that it is now part of her life. When she is carrying the bomb, her machine will gain HP, increased damage, weight, and size.

Calamity’s Weapon 1 is “Meritocracy,” which launches a claw forward dealing damage to enemies, and may also attach to the bomb and pull it into her possession. This is the only machine that can steal the bomb from enemies, creating a new range of strategies.

Her special ability is “Full Throttle.” As the weapon’s name says, she will put the pedal to the metal and gain speed as long as you keep the special weapon button pressed, consuming special weapon energy over time.

She is a tough one, and she is already available in Heavy Metal Machines!

We are extremely proud of the artistic and mechanical results achieved with Calamity and we’re sure she will add a lot of competitiveness to the game and we bet you’ll love it too. See you in the arenas!

☆☆☆☆☆
63
★★★★★
Get it now
Xbox One X Enhanced
Heavy Metal Machines is a one of a kind Free-to-Play Multiplayer Vehicular Combat game where players engage in 4v4 intense battles, controlling lethal vehicles in post-apocalyptic arenas.

A ROSTER OF UNIQUE VEHICLES
Ranging from a car crushing Monster Truck and a heavy armored Tank to a blade thrower Motorcycle and a magnetic Tow Truck, each of the many vehicles has a different set of weapons and gameplay styles that bring a wide range of strategic possibilities to each match.

BECOME A METAL GLADIATOR
You can play HMM casually, or if you want to spice things up, join the Ranked Mode to be godlike, or create your Team and bring it to the Colosseum, an in-game Tournament, to battle for prizes and prestige.

NEWCOMERS ARE WELCOME
If you are new to HMM, no worries! Training modes are available to sharpen your skills.

COMPETITION
If you feel competitive, you can participate in Community Tournaments, or even the Metal League, Heavy Metal Machines’ Official Tournament, that features cash-prizes to fuel the game’s Esports scene.

PLAY TOGETHER
Meet new players in the game or bring your friends for way more fun!

MAY THE BEST GLADIATOR WIN
HMM is free-to-play and not pay-to-win. Rest assured that there is no way to buy in-game items that give vehicles gameplay advantages.

Related:
Start a Journey of Discovery When Omno Launches July 29 with Xbox Game Pass
Check Out the Biggest Game Reveals From Nacon Connect
Save the World Together in Operation: Tango, Available Now for Xbox One and Xbox Series X|S