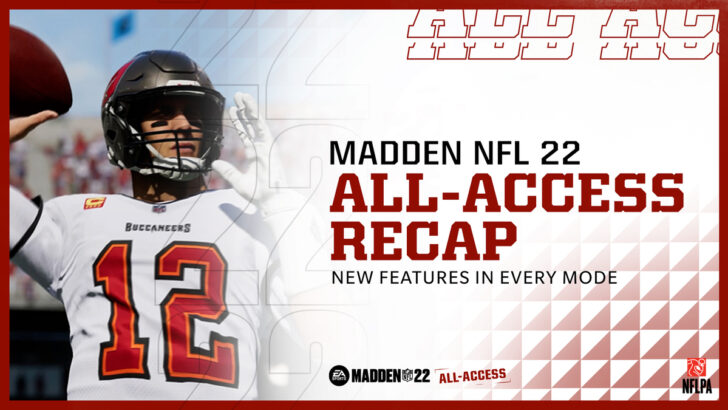 In Madden NFL 22 All Access, we covered some of the biggest and most exciting new features coming to the game. From the redeveloped Franchise mode to Dynamic Gameday (only available on Xbox Series X|S), Ultimate Team, and more, there’s a lot to get stoked about ahead of launch. Check out the details on some of the all-new features that we covered in All Access.

A longtime fan-favorite mode, we’ve added more depth to Franchise, giving you more control from the front office to the field. With new Franchise Staff, you can hire and manage your coaching staff. Dish out staff points to upgrade your staff’s specialized talent trees. Schedule and plan your team’s practice reps, plan for your opponent’s strengths, and integrate strategies into every week’s play-calling with Weekly Strategy. So when gameday happens, you’re ready for anything. Then, there’s the Seasons Engine. This is a tool that drives narrative storyline moments that you’ll see throughout Franchise, reflecting a real-life NFL season.

Next, one of the most exciting new features that will affect gameplay across Madden NFL 22 modes: Dynamic Gameday (only available on Xbox Series X|S). It’s everything you love about the NFL injected into every mode. Next Gen Stats Star-Driven AI fuses with Gameday Atmosphere, powered by real-world data and built to bring real-life tendencies and behaviors to the Madden gridiron, for both individual AI players and AI teams. The Madden experience will evolve throughout the season based both on gameplay and Next Gen Stats captured from real NFL games. Then, feel a whole new vibe from the seats to the sidelines with Gameday Atmosphere. Once triggered, Home Field Advantage M-Factors in each NFL stadium can swing any game’s momentum in either direction.

We’re also bringing more to the exciting and ever-changing Face of the Franchise. Chase your NFL dream. In the new Road to the Draft storyline, you are a generational prospect in the 2021 NFL Draft. The career mode begins with the chance to train with, and compete against, some of the best players in the NFL at Nike Headquarters. Along the way, you are given the opportunity to improve your draft stock via the College Football Playoff, NFL team interviews, and private workouts with select teams. You’ll learn that managing your time and obligations is a big part of stardom early on. New this year in Madden NFL 22 are Classes that define how you play each position on the field. There are four positions this year to choose from; QB, WR, HB, and for the first time in Face of the Franchise, a defensive position – Linebacker. Each position has several Classes to choose from that reflect a specific playstyle on the field. Level up, go earn the No. 1 overall pick, and set the tone for your career. With unified progression, your avatar and all your progress, rewards, and gear are shared between Face of the Franchise and The Yard.

Speaking of The Yard, this popular new mode is reimagined in a big way for Madden NFL 22. Become the world’s greatest as you play through a redesigned campaign featuring stunning locations around the globe. Find events in the new live events hub. Then, do it all with the hottest gear in the game. All your progress is fully integrated with the updated avatar and unified progression system. Superstar KO is also back, introducing NFL teams and rosters for the first time. Play fast games in this co-op eliminator mode featuring dynamic rules, unique stadiums, and icons of football culture.

The extremely popular Ultimate Team is back and for the first time ever, you can make halftime adjustments to Superstar X-Factors to counter your opponent’s strategies during MUT matchups. New Strategy items also simplify the chemistry system, allowing you to give boosts to individual players or sets of players within your squad. Plus, Dynamic Gameday integrates Next Gen Stats into Ultimate Team to track stats for your player items, including the historic stats of anyone who owned the item before you.