Chivalry 2: House Galencourt – New Features To Get Excited About 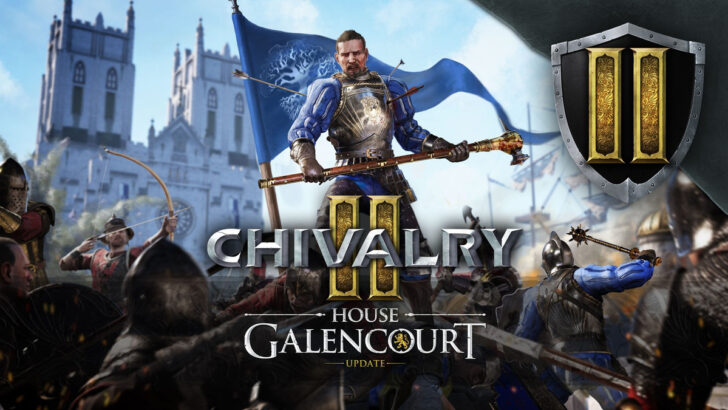 Just under two months since release, and we’re blown away by all of you lords and ladies who have thrown down the gauntlet in Chivalry 2. In between watching all of the ridiculous and awesome clips people in the community have been uploading, we’ve also been hard at work on Chivalry 2’s first big content update! House Galencourt is the first of many free content updates coming to the game, and we’ve added hundreds of new features, fixes, and improvements to make the game even better than it was when you booted it up for the very first time.

Without further ado, here’s a rundown of a few of the most prominent features released in House Galencourt.

The fight continues as the Mason Order lays brutal siege to the Great Walled City of Galencourt, the seat of the Agathian Church. The titular city of Galencourt takes center stage in this update with a gloriously epic team objective mode and an up-close and personal courtyard map for team deathmatch, free for all, and the brand-new arena mode!

The fan-favorite feature from the original Chivalry: Medieval Warfare is back and better than ever! Witness your glorious arrow shots, throws, and ballista pins in first-person by holding down L3 and X on your Xbox Wireless Controller. Be sure to share your amazing clips with us on Twitter @ChivalryGame.

It’s time to put your skills to the test in the brand new Arena Mode! Group up with friends or strangers in 3v3 battles of strength and skill on brand new Arena variants of Tournament Grounds, Fighting Pits, and Courtyard. The first team to win 5 rounds is crowned victorious!

Are you itching to find out just how deadly of a soldier you really are? Now you can with the player profile page located in Chivalry 2’s main menu! Please note: This is a preview feature; as such, any stats shown may be reset at any given time (not player rank/progress).

Chivalry 2: House Galencourt is out now on Xbox One and Xbox Series X|S. For detailed patch notes including all bug fixes and balance changes, hop on over to the Chivalry 2 Blog! I’ll see you on the battlefield!

☆☆☆☆☆
311
★★★★★
$39.99
Get it now
Return to the ultimate medieval battlefield.
Chivalry 2 is a multiplayer first person slasher inspired by epic medieval movie battles. Players are thrust into the action of every iconic moment of the era – from clashing swords, to storms of flaming arrows, to sprawling castle sieges and more.

Storm into battle with cross-play on all platforms!
Charge headfirst into stunning cinematic battles inspired by epic medieval action films
Experience large-scale conflicts in sprawling medieval environments ranging from Tournament grounds to full-scale castle sieges
Pick your playstyle with 4 classes and 12 subclasses, each with their own unique weapons and abilities
and much more!