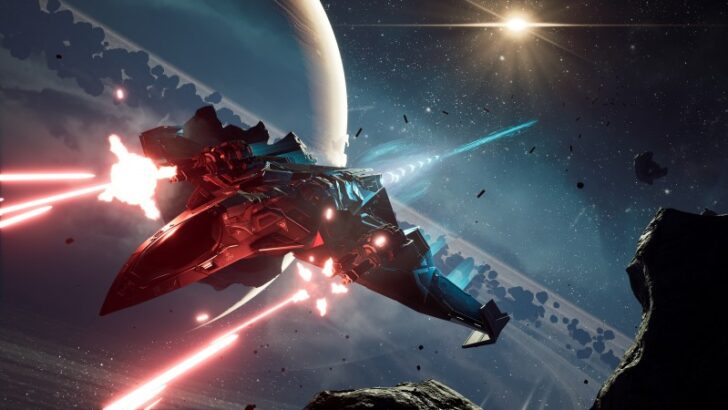 Nara spent a good part of her life inside a cult called the Circle that twisted her mind and trained her to tap into a mysterious alien force called “aether.” This dark, corrupting energy allows a special few to unleash godlike powers that break all the rules of physics. Unfortunately for the Circle, the cult didn’t keep a tight enough grip on Nara’s chains; now, this skilled warrior is free of the Circle’s influence and dead set on taking them down. Armed with the most advanced starfighter in the universe, Nara’s journey takes her to some of the darkest parts of the cosmos and challenges her sanity.

Developer Fishlabs is best known for its work on the Galaxy on Fire mobile series, but publisher Deep Silver has given the studio free rein to reinvent the space shooter genre with Chorus. The open-world space combat game is full of upgrades and a few unique spins on traditional zero-g combat. Several months ago, we got a very early look at the game in action. To get a better feel for it in a more polished state, we went hands-on for the first few hours with the latest version.

Chorus begins with Nara on the run from the Circle. To gain the upper hand, Nara steals one of the deadliest weapons in the galaxy: a sentient starcraft called Forsaken. Nara is mentally linked to Forsaken, allowing her to perform incredible flight maneuvers, such as the ability to make tight turns by drifting like a racecar. Chorus offers a solid sense of speed, which is often hard to do in games set in open space.

Chorus is one giant open world full of a range of side quests and other random encounters. Throughout her journey, Nara can upgrade Forsaken’s equipment. Each weapon is especially suited for different tasks. For example, Gatling guns have a high rate of fire but low damage output, which makes them ideal against fast-moving targets. Lasers hit hard, and their focused attacks are particularly good at disabling shields. Finally, missiles are incredibly destructive against armored opponents but are comparably slow, making them best for sluggish or stationary targets. Forsaken also has three different mod slots, useful for altering weapons stats or further customizing the ship’s performance.

Chorus’ flight controls feel good, and its variety of enemies keep the action flowing. For example, Crows are lightly-armed crafts that fall apart quickly under your crosshairs, but their speed makes them hard to hunt down, and their overwhelming numbers can leave you in a bind if you don’t thin the herd. On the other hand, Vultures are heavily armored gunships that pack a punch and deploy frontal shields that make them difficult to attack head-on. Thankfully these lumbering behemoths are easy to outmaneuver. Finally, Shade-class ships are giant dreadnoughts that continuously spit out smaller hostile ships, so you will want to destroy them quickly before they overrun you.

Even with Forsaken at her side, Nara isn’t ready to take on the Circle. She believes she needs to reawaken her aether abilities, so she sets off in search of a series of ancient temples connected to an ominous alien race called the Faceless. After completing these temple challenges, Nara gains new aether powers that help her both in and out of combat. One ability called the Rite of the Hunt allows Nara (and Forsaken) to briefly travel through the aether, meaning she temporarily blinks out of reality and reappears somewhere else. I used this to slip past barriers or reposition myself behind enemy ships. Another aether power transforms Forsaken into a beam of light that tears through enemy ships. Yet another allows Nara to seize control of enemy ships, turning them into deadly projectiles. Fishlabs says that Forsaken can eventually grow so powerful that Nara won’t even need weapons to take down fleets of enemies.

Space shooters have a long history in the industry, stretching back to 1971’s Computer Space. However, we haven’t seen many recent releases from the genre achieve widespread appeal. We don’t know if Chorus will change that, but it brings a few fresh ideas to the table. Chorus’ open space design, tight flight mechanics, and inventive upgrades leave us hopeful for the title’s launch in December.