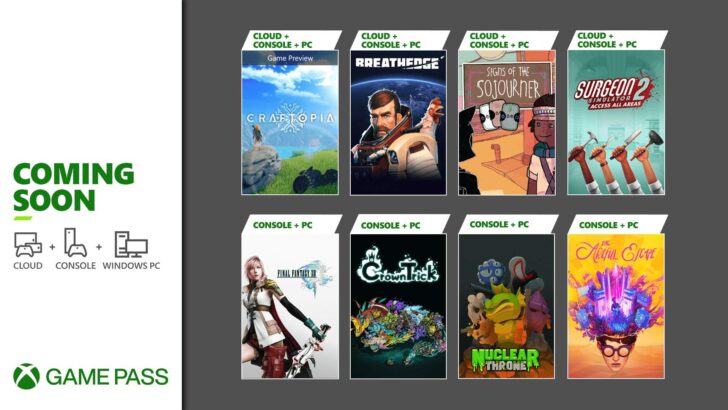 Welcome back to your monthly Xbox Game Pass update! We have several great games to add to your ever-growing play list, like Final Fantasy XIII, The Artful Escape, and more. Apologies to those who like to keep detailed lists on what to play next; it’s going to need some updating after reading this post. So, let’s get to it!

Craftopia (Game Preview) (Cloud, Console, and PC) ID@Xbox – September 2
You arrive on a small island packed with animals, resources, and infinite possibilities. What you do in this game is completely up to you – gather resources, harvest crops, fight bosses, capturing enemies, building a lovely house, unlocking new islands, exploring the world, and more! What will you do when you can do anything you’ve ever dreamt of?

Final Fantasy XIII (Console and PC) – September 2
Final Fantasy XIII is a fantasy RPG in which a band of brave humans struggle against fate in the utopian sky city of Cocoon and the primeval world of Pulse. Follow stylish heroine Lightning’s fast paced battles and high adventure in a mysterious new world.

Signs of the Sojourner (Cloud, Console, and PC) – September 2
A narrative card game about connecting with people. Your deck is your character, reflecting your experiences, and shaping your relationships. Travel to diverse locations to acquire goods for your shop. Along the way, you’ll encounter optimistic stories, compassionate characters, and delightful surprises in a world where climate change has made life hard.

Surgeon Simulator 2 (Cloud, Console, and PC) ID@Xbox – September 2
Bob’s life is in your hand! Scrub-in solo or with up to three friends in this physics-based sim and unearth the mysteries of the Bossa Labs Medical Facility, explore hundreds of community-made levels, and even create your own using the sandbox level building tool. Or, if you prefer, spend your time replacing all of Bob’s limbs with heads – that also works.

Crown Trick (Console and PC) ID@Xbox – September 7
Welcome to The Nightmare Realm! Guide protagonist Elle on a perilous journey through procedurally generated dungeons, carefully navigating unique enemies and traps that only move when Elle does thanks to Crown Trick’s unique synchronous turn-based mechanic. Strategically plan each move to survive, master a combination of skills, Familiars, and weapons to escape the labyrinth.

Breathedge (Cloud, Console, and PC) ID@Xbox – September 9
Inspired by Retrofuturism, Soviet aesthetics, and dark comedy movies, Breathedge is a fresh take on the survival genre that puts you in control of a simple guy called the Man who is carrying his grandpa’s ashes to a galactic funeral and suddenly finds himself in the middle of a universal conspiracy.

Nuclear Throne (Console and PC) ID@Xbox – September 9
Nuclear Throne is a post-apocalyptic roguelike-like top-down shooter. Fight your way through the wastelands with powerful weaponry, collecting radiation to mutate some new limbs and abilities. All these things and more you could do if only you were good at this game. Can you reach the Nuclear Throne?

Quake II (PC) – Available now
Originally released by id Software in 1997, Quake II is a fast-paced sci-fi first-person shooter. Outnumbered, alone and behind enemy lines you must destroy the Strogg defenses and assassinate their commander before they can attack Earth.

Quake III Arena (PC) – Available now
Originally released by id Software in 1999, and powered by id Tech 3, Quake III Arena is a fast-paced, competitive arena shooter where you are only as good as your reflexes.

Spiritfarer: Free Beverly Update – Available now
The second of three free updates planned for Spiritfarer this year, the Beverly Update introduces a new passenger and storyline in the diminutive-yet-adorable form of Beverly, the tiny owl spirit. Also included are new buildings for Stella’s boat, new collectible items, and a plethora of quality-of-life improvements inspired by suggestions from Spiritfarer’s community.

Fallout 76: Fallout Worlds Update – September 8
Fallout Worlds adds a rotating list of Public Worlds available to all players, each with its own unique conditions from a builder’s paradise to a challenging survival-focused landscape. Learn more about Fallout Worlds here!

Get ready to claim these Perks and more on your Xbox console, Xbox App for Windows 10 PC, or the Xbox Game Pass mobile app for iOS and Android. Also make sure you remember to claim your Perk for The Sims 4 before it leaves on September 14.

Apex Legends: Sarge Weapon Charm – September 2
Show the competition what you’re made of with your new Sarge Weapon Charm, brought to you by EA Play! Equip this to your favorite weapon and battle for glory, fame, and fortune in style.

Phantasy Star Online 2 New Genesis: September Member Monthly Bonus – Available now
Jump into the all new PSO2 New Genesis with some items to give you a hand! N-Half Scape Dolls (x5) to help revive you during intense battles, and Photon Chunks (x50) to strengthen weapons and units.

It may be September, but this is your last week to complete and claim any remaining Quests for the month of August. Earn those points and redeem even more rewards including Xbox gift cards and more!

Here are a couple of Quests you can complete this week:

The following games are leaving the Xbox Game Pass library soon! Be sure to jump back in show these games some love before they go. Remember to use your membership discount to save up to 20% to keep these in your library.

That concludes this wave of announcements! Keep an eye out on @XboxGamePass and @XboxGamePassPC on Twitter for updates when these games are ready to play. If you haven’t downloaded Xbox Game Pass mobile app yet we recommend it so you can install these games when you’re away from your console or PC. Catch you next time!