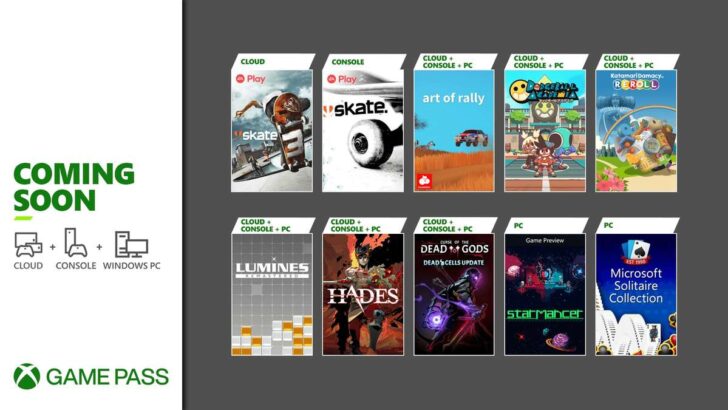 Get your mouse, touch screens, or controllers ready for some scrolling! We have a big list of games coming soon to Xbox Game Pass, featuring some dead gods, some not-so-dead gods, driving and skating, and more. Let’s jump in!

Curse of the Dead Gods (Cloud, Console, and PC) – August 5
You seek untold riches, eternal life, divine powers – it leads to an accursed temple, a seemingly infinite labyrinth of bottomless pits, deadly traps, and monsters. Your greed will lead you to death, but that is not an escape. Rise to fight again and defy the malignant deities that linger in this place!

Dodgeball Academia (Cloud, Console, and PC) ID@Xbox – August 5
Get ready to dodge, duck, dip, and dive in Dodgeball Academia available with Xbox Game Pass on day one! This vibrant sports RPG puts you in a world that lives and breathes dodgeball. Forge friendships and develop rivals as you train to become the ultimate champion – dominating on and off the courts.

Katamari Damacy Reroll (Cloud, Console, and PC) – August 5
The stop-at-nothing pushing prince is back and ready to reroll! When the King of All Cosmos accidentally destroys all the stars in the sky, he orders you, his pint-sized princely son, to put the twinkle back in the heavens above. Join the king on their wacky adventure to restore the stars – now in full HD!

Lumines Remastered (Cloud, Console, and PC) ID@Xbox – August 5
A game that beautifully marries the elements of sound, light and puzzle-action into one engaging, yet easy-to-play experience. You’re at the center of the high-energy, block-dropping action while you groove to awesome house, trance, and techno beats!

Skate (Console) EA Play – August 5
Head back to where it all began as Skate joins The EA Play List! Get chased by security guards, impress or annoy citizens, ride with pros, discover skate shops, and make spots your own in this fully reactive city!

Skate 3 (Cloud) EA Play – August 5
The award-winning Skate franchise returns to break new ground with Skate 3. Build the ultimate team and change the face of the city in this definitive co-op skateboarding experience with EA Play.

Art of Rally (Cloud, Console, and PC) ID@Xbox – August 12
Art of Rally is a stylized experience inspired by the golden era of rally from the creator of Absolute Drift. From beginner-friendly options to driving modes that’ll challenge the most expert drivers, race across the world through colorful and stylized environments, now including Kenya with 4 new cars, 6 new tracks, and a new free-roam area!

Hades (Cloud, Console, and PC) ID@Xbox – August 13
Defy the god of the dead as you battle out of the Underworld of Greek myth in this Game of the Year winning rogue-like dungeon crawler. You’ll wield the powers and mythic weapons of Olympus, while growing stronger and unraveling more of the story with each unique escape attempt.

Microsoft Solitaire Collection: Premium Edition (PC) – August 17
Be part of the most played video game in history! Get an ad-free experience in the Premium Edition, including an exclusive Xbox Game Pass card back! Enjoy the best Solitaire card games in one app, plus daily challenges, competitive events, Xbox achievements, and a new Xbox theme. Discover why millions around the world have loved this timeless classic for over 31 years.

EA and Codemasters are thrilled to expand the already-packed roster of titles on EA Play, with racing titles from three revered racing franchises. Xbox Game Pass Ultimate members can get behind the wheel of these titles on console starting August 10 with EA Play on console. Learn more here!

Dirt 4
Embrace your fear and race on the edge of control with Dirt 4. Experience the adrenaline rush of rallying across challenging global locations in legendary off-road machines and take on unique challenges in Joyride mode – coming soon to Xbox Game Pass Ultimate via EA Play.

Dirt Rally
Dirt Rally is the most authentic rally game ever made, road-tested over 80 million miles by the Dirt community. Take on the ultimate off-road challenge with Dirt Rally on EA Play!

Dirt Rally 2.0
Carve your way through the world’s most iconic rally locations in the most powerful off-road vehicles ever made, knowing that the smallest mistake could end your stage. Experience the most authentic point-to-point rally game combined with thrilling, fast-paced action of the FIA World Rallycross Championship.

F1 2020
The critically acclaimed F1 2020 adds more ways to play to the award-winning official F1 games series. Take the role of owner/driver in My Team, hit the grid with a friend via two-player split-screen, and earn customization items for your car and driver with Podium Pass.

Grid
Grid is a racing experience like no other. Offering unrivalled wheel-to-wheel racing for everyone, where every race is unpredictable as you create rivals and nemeses on your road to conquering the world of motorsport.

Dead by Daylight Archives Tome VIII: Deliverance
In Tome VIII: Deliverance, climb inside The Clown’s twisted mind as a chemical mishap turns a standard kill into a cartoon-fueled hallucination. Watch Jake Park grapple with his own mortality as the hunter becomes the hunted. And join the Observer on his quest for answers as he peels back terrifying new layers of the omniverse.

Rainbow Six Siege: Containment Event – Available Until August 24
Containment is a dynamic time-limited event for Season 2 that features a new gameplay mode, exclusive operator bundles, and much more! The event sets the players in a reworked version of the Consulate map overruled by the Chimera Parasite in a new game mode called Nest Destruction. Live August 3 through August 24.

We have more great Perks coming your way soon and some that are available now. Don’t forget to claim them in the Perks gallery (including your last chance for the NBA 2K21 MyTEAM Bundle on August 4!) on your Xbox console, Xbox App for Windows 10 PC, and the Xbox Game Pass mobile app for iOS and Android.

Starting today, we have a new month of Quests available for you to go complete and claim!  Go take part in some Animal Antics themed games this month, and earn 2x points for select Quests, so you can go redeem even more rewards!

Here are some of the Quests you can start completing this week:

Time to give these games a proper farewell before they leave the Xbox Game Pass library! Remember to use your membership discount to save up to 20% off these games if you want to purchase and keep gaming!

Congratulations, you made it to the end! There were a ton of games we just threw at you, so keep an eye on @XboxGamePass and @XboxGamePassPC on Twitter for updates when these games are ready to play. And my favorite tip is to use the Xbox Game Pass mobile app to remotely install the games to your console or PC without ever having to find the controller that is wedged in your couch (maybe that’s just me). Talk to you next time!