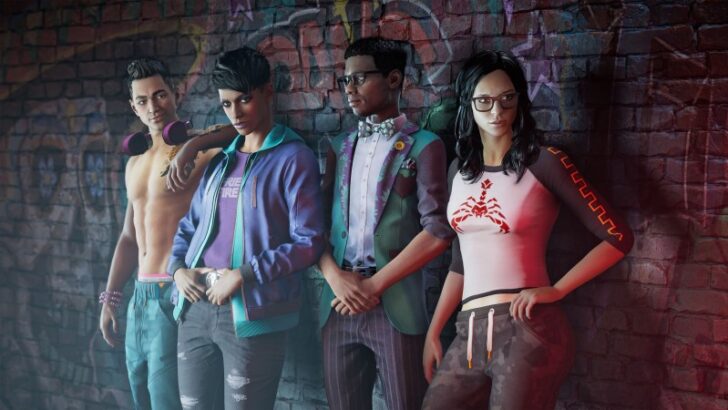 The Saints are back! Following its reveal in August, Saints Row is on the cover of the next issue of Game Informer, and we have so much information to share with you! The reboot from the development team at Deep Silver Volition promises to carry on the spirit of the original games while setting the table for a new story featuring a new cast of characters. For our cover story, we played several hours of the new game and spoke at length with key team members.

We played through two mainline story missions, two side missions, and participated in two Criminal Ventures, all-new mission chains that let the Saints earn extra cash performing illegal activities behind legal fronts. Not to mention all the spare time we spent exploring the various districts of the city. In the cover story, you’ll learn all about the characters, the new city of Santo Ileso, the rival factions the Saints will face off against, the upgraded car combat, and plenty more. In our conversations with Volition, we learned why the studio decided to reboot the series, what elements were most important to carry over from previous games, and lots more. And that’s only scratching the surface of what you’ll learn in our 12-page cover story.

Saints Row may be the main attraction of this issue, but there’s plenty more to look forward to when you crack open the pages. Kimberley Wallace has an excellent, in-depth piece about how important (and misunderstood) video game localization is. If you missed last month’s PlayStation Showcase, Jill Grodt has you covered with a detailed rundown of all the huge announcements to come out of it. Since it’s officially that time of year, Jill also has a look at all the most exciting horror games on the horizon. And speaking of “that time of year,” the holiday season is fast approaching, so Matt Miller curated this year’s edition of our annual Holiday Buying Guide, where we give you tons of suggestions to help you cross some names off your shopping list.

Of course, it wouldn’t be a new issue of Game Informer without new looks at the most exciting games on the horizon! In this issue, we have previews for Pokémon Brilliant Diamond & Shining Pearl, Marvel’s Guardians of the Galaxy, DokeV, Dying Light 2 Stay Human, Shin Megami Tensei V, Forza Horizon 5, and so much more!

Print subscribers can expect their issues to begin arriving in the coming days/weeks. The digital edition of this issue launches this afternoon for PC/Mac, iOS, and Google Play. You can also get the latest issue through third-party apps on Nook and Kindle. To subscribe to either the digital or print version, click here.