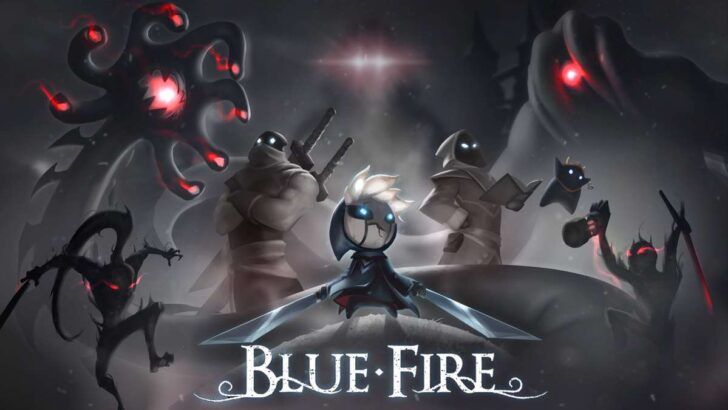 One thing remained the same throughout all development, the focus on movement and player controller at the core of everything.We slowly unraveled the DNA of Blue Fire and realized how this very fast, hard and precise 3D platforming worked in the interconnected adventure type of world we wanted to createWe’ve had a blast seeing players mix their favorite abilities and power ups to personalize Blue Fire’s experience, and are now eager to see the Xbox community bring our hero to life.

A small glowing character stands in the middle of a bridge, alone in the dark. As you move forward you begin to feel the ease and fluidness in the controls, you jump and move gracefully through both the air and the ground, performing jumps, double-jumps, dashes, and attacks that all blend with momentum and give both great satisfaction as well as a very fast and precise control over the small creature on screen.

As you reach the end of the bridge you discover a big platform and pile of rubble at its center. The rubble awakens and springs to life as it resembles the form of an antagonist. This pretty much describes the first playable demo of Blue Fire we developed!

Now, two years later, we’re thrilled to be launching Blue Fire on Xbox! We’ve had a blast seeing players use the movement set we’ve created and mix their favorite abilities and power ups to personalize Blue Fire’s experience, and are now eager to see the Xbox community bring our hero to life.

A lot has changed since the start of development — I wouldn’t even know where to start — but one thing remained the same: the focus on movement and player controller at the core of everything. We always envisioned Blue Fire as a game that would have a unique twist and original innovative ideas along with many familiar elements. And very early on, we knew that our uniqueness would come primarily through the combination of our movement with our world structure and level design.

But shaping this uniqueness was not something that came easy or that we were able to define from the start. It was rather a long exploration, a lot of thinking, brainstorming and testing.

For quite a while we worked only on the controller, making it feel really good, super fast and precise. We tested a lot of abilities and powers, including double jump, spin attack, dash and double dash, aerial hits and more. There was even a time when we made the main character slide on ledges as if it was skating lol. When we were comfortable with how it was feeling we started trying different situations, distances and mechanics that could work with it and were engaging.

As we advanced, we slowly unraveled the DNA of Blue Fire and realized how this very fast, hard and precise 3D platforming worked in the interconnected adventure type of world we wanted to create. Through testing and iteration, we learned the ins and outs of this platforming formula and further developed and polished our controller.

We didn’t have any exact references of games that had the type of 3D controller and world structure we were making and could only look at specific snippets of other games, mainly 2D hardcore platformers, metroidvania games and 3D platformers. In a way I guess we mixed these genres, but uncovering what that blend would even look like was quite a task and there were many things we had to discover on our own.

We faced many challenges and were very careful about which battles we chose to fight and the ones we decided to pass on. The ability to improve the player controller throughout the game rather than the player inventory or actual stats was hard to balance with the nonlinear experience we wanted to deliver. In the end, we had to sacrifice a bit of the non linearity for a pretty straightforward progression in the first third of the game, while adding a lot of side content and quests further in, to not lose the non linear adventure feel.

We also had so many optional platforming upgrades that we had to balance the level design in the late game in a way that it wouldn’t be too easy for players that had them all and at the same time wouldn’t be too hard for players that didn’t. We eventually found a good balance by making sure that players would run into a good amount of upgrades early on, rewarding exploration and side questing and discreetly guiding them towards secret areas.

Another way in which we delivered on this was creating optional yet very rewarding challenges named “Voids” that were extremely difficult in terms of platforming. This balanced the difficulty for very good players that had collected many power ups, so everyone could have a tough challenge at any time – since it was part of the core of the game.

We learned a lot about our formula during development and even more upon launching the game and seeing player’s feedback. We’re now really looking forward to applying that experience and knowledge and starting to work on our next project!

Embark on an extraordinary journey through the desolated kingdom of Penumbra and discover the hidden secrets of this long-forgotten land. Explore mystical temples, encounter survivors and take on strange quests to collect valuable items. Along your adventure, slash your way through daunting adversaries, roam across mysterious and abandoned regions, leap through deadly traps and ultimately master the art of movement.