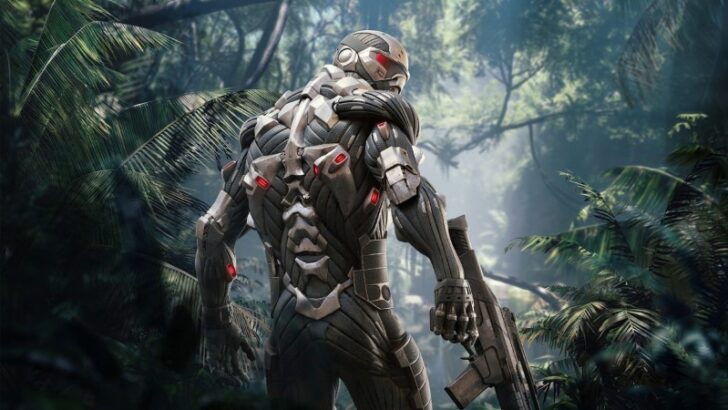 On PS5 and Xbox Series X, the games can run at up to 4K/60 fps and sport improved lighting and high-resolution textures. The PC version features ray tracing and the option to lock the framerate or run it at max settings.

Crysis Remastered Trilogy is a digital-only release priced at $49.99. Crytek is also selling Crysis 2 and Crysis 3 Remastered separately for $29.99 each (with physical Switch versions coming later). As previously reported, the re-releases are campaign-only; each game’s multiplayer modes are not included.

Original Story: Crysis Remastered Trilogy is launching sometime this fall. The package includes last year’s modernized version of Crysis as well as remasters of Crysis 2 and Crysis 3 to run on modern consoles and PC. The bundle is the result of a development partnership between Crytek and Saber Interactive.

While Crysis Remastered launched as a standalone title last summer, this is the first time that the second and third games have been shined up for a modern encore. Unfortunately, Crytek hasn’t detailed the specific upgrades those games will receive, but Crysis Remastered boasted improved visuals with a resolution up to 8K as well as HDR and ray tracing. While you wait for Crytek to confirm the technical details, you can get a visual sense of the improvements by watching the teaser trailer below.

If you’ve already experienced Crysis Remastered and just want to play the remaining two games, Crytek states that Crysis 2 and Crysis 3 Remastered will eventually be sold as standalone titles (but doesn’t specify when that will happen). The downside of this package is that none of the games will include their respective multiplayer modes. Still, if you missed out on the Crysis series back in the day, this package offers the perfect opportunity to give it a shot without having to stare at aging visuals.

Crysis Remastered Trilogy is coming to PlayStation 4, Xbox One, Switch, and PC. There doesn’t appear to be native PlayStation 5 and Xbox Series X/S versions of the game, but Crytek says playing on current-gen hardware via backwards compatibility will offer an even “smoother” experience. There’s no word on price as of yet. For more on the series, you can read our reviews for the original versions of each game down below.

Are you excited to blast through the Crysis Trilogy one more time or will you be taking your first trip? Let us know in the comments!