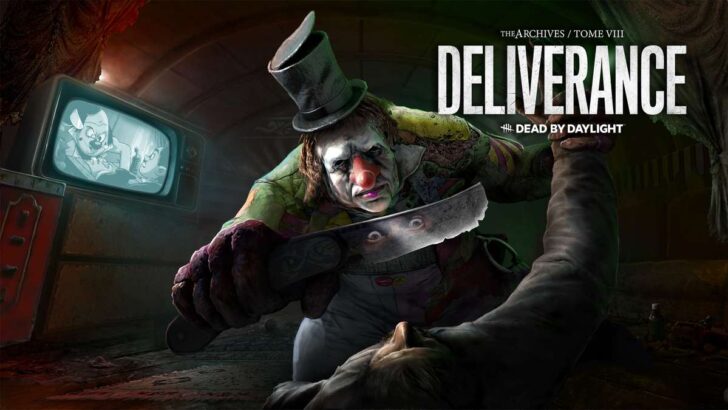 Hello, People of the Fog! With our fifth anniversary in the books, and the Resident Evil Chapter in the wild, it’s already been a monster summer for Dead by Daylight – and we’re not done yet.

Dig in below for all the details on Tome VIII opening today within the Archives; the latest graphical update in our ever-evolving Realm Beyond project; and a look at the latest outfits to help bring some style to your next trial.

Available now, Tome VIII: Deliverance will be available to all players as part of the Archives.

For anyone new to Dead by Daylight, entries in the Archives are two-fold: You have Tomes which offer challenges for players to complete and reveal new lore through never-before-seen character stories. You also have Rifts where players can earn exclusive time-limited cosmetics.

In Tome VIII: Deliverance climb inside The Clown’s twisted mind as a chemical mishap turns a standard kill into a cartoon-fueled hallucination. Watch Jake Park grapple with his own mortality as the hunter becomes the hunted. And join the Observer on his quest for answers as he peels back terrifying new layers of the omniverse.

In the Deliverance Rift, players can earn over 60 time-limited rewards through the Free and Premium Tracks including new complete outfits for The Clown and Jake Park.

This Rift also introduces a brand-new challenge for Survivors: Yellow Glyphs. Survivors can seek these out during trials to trigger a series of skill checks designed to test even the sharpest reflexes. Pass them to complete the challenge. Fail, and the Glyph teleports away and must be found again.

You can celebrate this Tome’s release with 50% off the Auric Cell and Iridescent Shard prices (in-game currency) for The Clown and Élodie Rakoto from July 28 (11am ET) to August 4 (11am ET).

The Realm Beyond: Update 6

With Dead by Daylight evolving every day, it can be just as important to look back as it is to look forward. We’ve spent the past year working on a visual overhaul of the game, dubbed The Realm Beyond, with the goal of creating the best possible in-game experience for our fans.

We’re happy to share that the Tome VIII release also includes our latest Realm Beyond update which pays special attention to improving the character models of some of our earlier and most beloved Survivors. These include Meg, Claudette, Dwight, Jake, Nea, Ace, Feng, David, and Kate.

Update of Claudette Morel, one of Dead by Daylight’s original four Survivors from 2016.

From skin textures, to hair, to facial animations, a lot of care went into making sure our first Survivors now look as good as our last, ensuring a new level of visual consistency across Dead by Daylight. And there’s still plenty more to come.

Update of Dwight Fairfield, one of Dead by Daylight’s original four Survivors from 2016.

New additions to The Greek Legends Collection are coming soon!

One of Dead by Daylight’s fan-favorite collections is about to get a lot bigger with a whopping six new outfits being added to The Greek Legends Collection for Killers and Survivors alike. From styles suited for Hades, Olympus, and everything in between enjoy these Grecian-inspired looks for The Blight, The Nurse, Jane, Élodie, Kate, and Jeff.

Here’s to a busy summer in and out of the Entity’s Realm! We hope you have a great time with Tome VIII: Deliverance, and don’t forget to follow us on social media to make sure you never miss a beat. See you in the Fog.

☆☆☆☆☆
1040
★★★★★
$29.99
Get it now
Xbox Game Pass
Ever wished to play as one of the characters from your favorite horror movies? Dead by Daylight is a 1v4 multiplayer game that draws from all corners of the horror world from a powerful slasher to a terrifying paranormal entity.

Choose between playing an unstoppable Killer and one of 4 Survivors trying to evade a gruesome death. Each character has their own deep progression system and plenty of unlockables that can be customized to fit your personal strategy. Work together to escape, or stalk and sacrifice every Survivor.

This Edition of Dead by Daylight gives you access to a roster of 7 Killers (The Trapper, The Hillbilly, The Wraith, The Nurse, The Hag, The Huntress and The Doctor) and 9 Survivors (Meg Thomas, Claudette Morel, Jake Park, Dwight Fairfield, Ace Visconti, Nea Karlsson, Bill Overbeck, Feng Min and David King). It also includes two cosmetic add-ons packed with outfits for various characters.