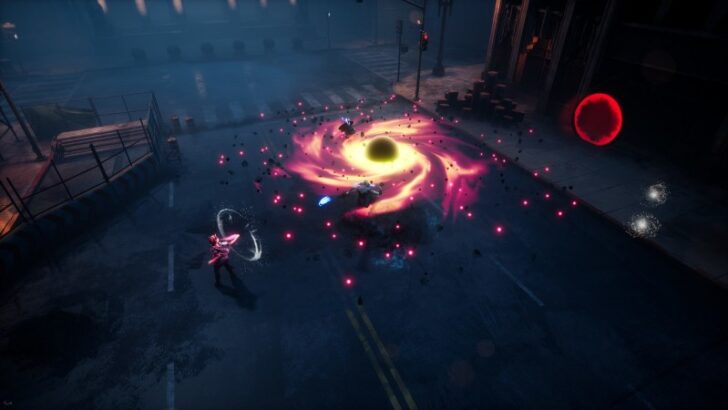 Reviewed on: PC
Also on:
Switch

As Cassidy, your goal is to conquer the nightmares that plague your dreams. To this end, you employ everything from pool cues, yo-yos, finger guns, and magic bows to complete your adventure against strange nightmares and ghoulish bosses. An excellent combat system creates a flow that has you zipping from monster to monster. Secrets and unlocks await around every corner. Some smart choices – like letting players teleport to rooms they have already discovered instead of walking – add some welcome convenience to the roguelike dungeon crawl.

Combat is crisp, responsive, and the highlight of Dreamscaper. While I found it possible to get through a run with some incredible gear and big buffs without engaging with the battle mechanics, it is incredibly satisfying to learn how to perfect dodge, block, parry, and time your attacks. You can even deflect projectiles back at foes as you master the timing. Boss fights are skill-oriented, and you must learn each of their abilities and how to counter them. My first battle with each boss was intimidating, and I often failed early attempts. Later, I was running circles around these monsters and finishing them off without getting touched. Mastering and engaging the mechanics is a true joy, and the combat kept me coming back even after I’d completed an entire run of the dreamscape.

Each dungeon runs yields various resources that you can spend in the waking world between runs. Eventually, you unlock new items to find during runs and permanent power boosts, including health, potent companions, and more. In addition, you can spend resources to alter the room configurations and logic. Spending resources allows you to add rooms, change how rooms work, and add considerable options to each run, and this adds another valuable foible to play with as you work on other stats and skills. Being able to add challenge rooms for more items, health fountains, and item enhancing blacksmiths makes a huge difference and is a cool roguelike feature on top of the other progression methods.

As your relationships with the various residents of the town grow, you gain influences you can bring into the dungeon, which can make you an offensive or defensive powerhouse. While the game attempts to turn these relationship-building encounters into a narrative, these efforts fall flat compared to the rest of the game, and I found myself skipping the little vignettes to get back to the action. While the small-town chat and look into lives might be suited for a more laid-back game, I had little interest in the rather uninspiring stories of the townspeople who attempted to regale me about their lives at the record store or journey as historians. The soundtrack is on point – soothing and calming as you walk the cozy land of the living but appropriately tuned up and raucous within the nightmare.

A notable lack of enemy variety is apparent as you dig deeper into the dreams, but this didn’t diminish my experience. Even though the game involves repeatedly plowing through many of the same creatures, the variety of tools on hand to do so keeps things fresh until the very end. The continual drip-feed of upgrades makes every run a joy, even if you meet an untimely end. A lucid dreaming option is great for players who want to make significant progress every run regardless of other factors. Lucid dreaming gives players additional defense with every run, making success a sure thing in the long term. This option is essentially a way to add a difficulty slider to the core roguelike formula and is an excellent choice for those looking for a far more forgiving entry point.

If you’re an old-time lover of roguelikes that’s into things like Binding of Isaac or Dungeons of Dredmor, Dreamscaper is for you. If you’re a newer addition to the ranks of procedurally-generated dungeon crawls with the new era of roguelites like Rogue Legacy or Hades, Dreamscaper is for you. Either way, smart design decisions and surreal vibes surround the experience, making this an excellent summer surprise.

Summary: Explore the depths of your dreams in this engaging roguelike.

Graphics: The visuals expertly convey a surreal dream state that fits the concept wonderfully, creating a whimisical world to explore

Playability: If you don’t master the combat, you can engage with plenty of powerful permanent progression hooks. A lucid dreaming option allows anyone to conquer the nightmares