Eldest Souls Review – What A Rush 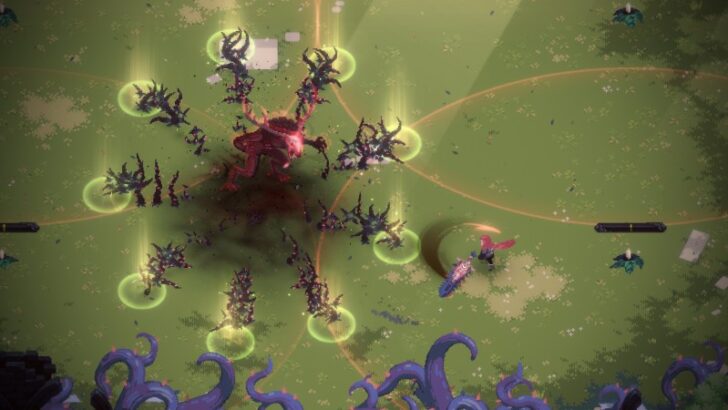 Let’s rip this band-aid off now: Eldest Souls is a Souls-like indie action game. Before you flee in terror screaming, “not another one of these!” you should know the game offers a nice twist by stripping away fodder enemies and shortcut-driven exploration to focus squarely on elaborate, tough-as-nails boss battles. Furthermore, Eldest Souls’ combat and progression offer smart ideas that make its challenge not only bearable but strategically gratifying. Yes, the game sports some of the sub-genre’s familiar trappings, but it succeeds in putting the “rush” in “boss rush.”

You are a lone warrior brandishing a huge sword with a straightforward task: infiltrate a citadel imprisoning ancient gods who destroyed the world and kill every one of them. That’s it. Scattered notes and the occasional NPC offer additional, sometimes exciting context for this world gone awry, but I was more concerned with getting my sword dirty than mulling over the how’s and why’s of it all.

Eldest Souls wears its FromSoftware inspirations on its sleeve but is thankfully not as harsh. For one, you’re not collecting currency, so you don’t lose anything on dying. Stamina only dictates how often you can dodge, meaning you can swing your sword all day without consequence. Armed with a heavy broadsword, your basic attacks are deliberately slow, to the point of feeling slightly unresponsive. It’s not a deal-breaker, but it could stand to feel tighter, and it took me a while to get used to combat.

My favorite aspect of Eldest Souls is that you don’t collect health pickups. Instead, you regain health by landing charged sword strikes. This system does an excellent job of encouraging and rewarding aggression and kept my morale from plummeting whenever I got stomped. Lose 90 percent of your health during the opening seconds of a bout? A few hard hits can patch you up as if nothing happened. I love how this mechanic emboldens me to keep bringing the fight no matter how bleak things look and led to some incredible come-from-behind victories.

The Old Gods offer an entertaining and supremely challenging gauntlet of battles that pushed me to use every skill. Each boss is fun, even those who took a dozen attempts or so to topple. Favorites include a gravity-controlling mage and a deer god who’s much more than meets the eye. Even the final big bad had me grinning with excitement as I cut through its seemingly bottomless well of offense. Enemies are multiple-trick ponies that lob screen-filling traps, bullet-hell style projectiles, and often shift tactics or take on new forms mid-fight. Surviving their assaults can be infuriating, and I saw the Game Over screen hundreds of times. Sometimes the sheer number of attacks to look out for can feel maddening, but I always knew where I went wrong and ultimately succeeded by studying attack patterns while properly managing stamina. Instant respawns also kept me engaged, as did the option to try my luck against other foes as multiple are available to challenge at a time.

Winning the day requires a mastery of Eldest Souls’ three combat styles: Windslash, Berserk, and Counter. In layman’s terms, that’s Speed, Offense, and Defense. You can only equip one class at a time, and each has a separate skill tree of abilities and buffs, but you can switch by respec-ing skill points whenever you want at no cost. Whether I was spawning homing projectiles using Windslash or unleashing devastating parry attacks under the Counter tree, I found each class entertaining in its own way. As someone who rarely respecs in a game, Eldest Souls pushed me, with great success, to change my tactics whenever I hit a wall. Eldest Souls isn’t about figuring out which class a boss is weakest against, ala rock-paper-scissors, but rather learning which approach works best for your play style. Ability granting shards earned from bosses provide additional customization options to the deceptively deep character building.

Between god-slaying you engage in light exploration, converse with characters such as an omnipresent bard, or oddities like a talking frozen skull. These characters usually ask you to bring them an artifact, so exploring thoroughly to find well-hidden items is important. You can completely ignore these fetch quests as they have no bearing on the critical path, but you can earn perks such as increased movement speed. It’s nothing fancy, but it does a fine job filling out the adventure without feeling like needless padding.

Weirdly, the more Eldest Souls handed me my butt on a bloodstained platter, the more it grew on me. Hitting walls opened my eyes to the smart nuances in combat and made each mammoth confrontation even more exciting. Once the game clicked, I gleefully charged into the action, excited to add another monstrous head to my proverbial wall. A New Game + mode ups the ante on these titans and keeps you on your toes. Eldest Souls is a no-brainer if you already enjoy punishing games of this ilk, but the forgiving health system and honed-in challenge may entice newcomers to brave its dangers.

Summary: This challenging boss rush can be maddening but its rewarding combat makes it worth the struggle.

Concept: Topple almighty gods amid a ruined world in this Souls-like boss rush

Graphics: Every area is rich with detail and sells the idea of a once-beautiful land in turmoil. Some bosses sport cool designs though a few lack imagination (for example, one is just two floating orbs)

Sound: The battle soundtrack is appropriately grandiose, which is contrasted by the somber ambiance heard roaming the overworld

Entertainment: Eldest Souls’ punishing difficulty may turn off some, but this entertaining and rewarding combat system made me look forward to every titanic face-off