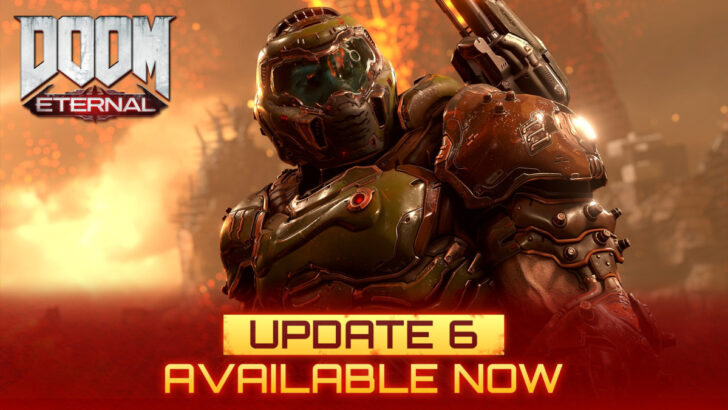 Update 6 offers up to three visual modes to let you choose the experience you want, from realistic lighting to high resolution graphics or even silky-smooth frame rates. See the full breakdown on what features are available for your Xbox system below:

Players on all platforms are also getting a new Master Level in Update 6! Travel to Taras Nabad, a grand city within Argent D’Nur that was once victim to a massive demon invasion. Now remixed for a greater challenge, return to Taras Nabad and show off your demon slaying skills!

That’s not all, Update 6 also has something new for Battlemode. Enter an all-new arena, Corrosion! This update also features a full suite of enhancements, including several balance changes to improve your experience in Doom Eternal’s 2v1 multiplayer mode.

Get the latest info on all things Doom by following our official Twitter account and becoming a member of the Slayers Club, where you can get the latest news, join in community challenges and even unlock in-game content for Doom Eternal. Doom Eternal is also available to play with Xbox Game Pass.

☆☆☆☆☆
795
★★★★★
$59.99
Get it now
Xbox Game Pass
Hell’s armies have invaded Earth. Become the Slayer in an epic single-player campaign to conquer demons across dimensions and stop the final destruction of humanity.

The only thing they fear… is you.

Experience the ultimate combination of speed and power in DOOM Eternal – the next leap in push-forward, first-person combat.

UNHOLY TRINITY
Take what you need from your enemies: Glory kill for extra health, incinerate for armor, and chainsaw demons to stock up on ammo to become the ultimate demon-slayer.

Enter BATTLEMODE
A new 2 versus 1 multiplayer experience. A fully-armed DOOM Slayer faces off against two player-controlled demons, fighting it out in a best-of-five round match of intense first-person combat.