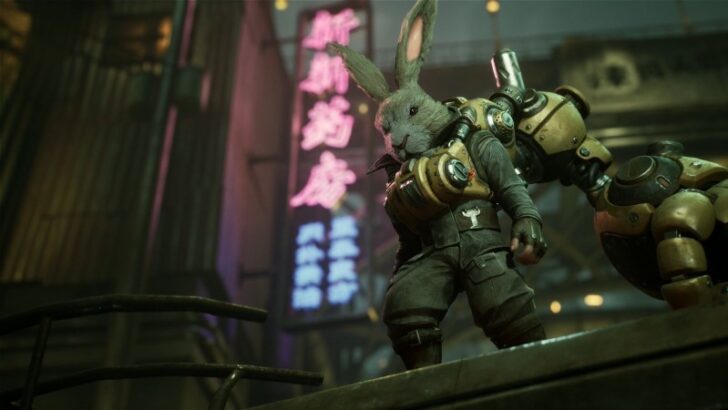 Rating: Everyone 10+
Reviewed on: PlayStation 5
Also on:
PlayStation 4, PC

The Legion, an armada of robotic canines, rule the neon-tinted slums of Torch City with a literal iron fist. Anthropomorphic citizens called Furtizens begrudgingly accept this regime, but war hero Rayton the rabbit has other plans. Armed with a giant robotic fist, he takes the fight to his battery-powered oppressors to thwart a grand takeover while settling a personal score at the heart of the conflict. Knock around a few heads in this side-scrolling action title, and you’ll understand what the iron dogs learned the hard way: Rayton is one heck of a force to be reckoned with.

Throwing hands, or rather “hand,” with Rayton feels appropriately impactful and gets better as you unlock new attacks and combo strings. Executing powerful uppercuts, juggling opponents in mid-air, then landing a charged strike to send foes hurtling across the screen never gets old. Despite the game’s title, you also wield two more weapon types. A gigantic drill grinds enemies into bolts while an electrified whip can bind foes as it unleashes rapid attacks like a one-armed Doctor Octopus. Mixing these three distinct combat styles creates a well of awesome attack combinations that only get deeper as you unlock their individual upgrade trees. Sub-equipment such as a rocket launcher and explosive decoy dummies offer fun compliments to your main arsenal.

Oddly, the game has two identical parry mechanics: one that expends energy and one you can freely execute. Unfortunately, the free version requires hitting forward on the stick, which feels unnatural and unreliable. I often walked headfirst into attacks as a result, and successful hits felt like dumb luck. The limited-use parry is mapped to a more appropriate shoulder button for easy execution, but its energy drain sours an important aspect of combat.

The robotic enemies come in a variety of classes and challenged my mastery of the abilities. Teleporting ninja frogs keep you moving, aerial turrets force the fight into the skies, and metal samurai challenge you to think intentionally, parrying and striking at the right moments. I had a great time taking this rogue’s gallery apart despite the challenge they offer. However, they sometimes crowd doorways and strike as soon as you enter a room which feels cheap. Mini-bosses and their larger-scale brethren test the limits of your skill and take multiple attempts to conquer, but the challenge is rewarding and fair.

Exploring the expansive map consists of the standard formula of “find the right ability to unlock doors,” but smooth maneuverability makes getting around enjoyable. Rayton’s double jump, wall climb, and air dash are expected fare, but they’re well-tuned and made me confident I could survive the assortment of platforming gauntlets. Avoiding laser beams, rotating spike platforms, and the murderous eye of a giant mechanical squid is satisfying. Torch City’s rundown streets, billboard-laden homes, and quiet shopping district is gorgeous thanks to the attention to detail in every grimy brick. The adventure eventually takes you outside its walls and underneath them for welcomed visual variety, such as snowy outposts and ancient temples. Areas are divided into separate labyrinths that are largely fun to explore, but they could stand to have more fast-travel points. Warping from point A to point B often feels like picking your poison of which lengthy route to retread.

That said, F.I.S.T.’s world begs to be explored thanks to its bounty of rewards and collectibles. Smashing iron piggy banks explode into a confetti of coins. Finding posters unlock cosmetic skins for your weapons. Bringing scattered plant seeds to a young botanist rewards cash and unlockables. Rescuing an in-over-his-head thief from his repeated blunders grants skeleton keys used to unlock special chests. While the game lacks proper side quests, smaller narratives, like encountering an enemy paper pusher who routinely offers new reasons why you should spare him, adds flavor to the world. Even after spending two dozen hours with F.I.S.T. I was itching to see what else lay around the corner.

F.I.S.T. offers another fine example of an exploration-focused side-scroller, and fans of the genre will find plenty to love. What it lacks in innovation, it makes up for by executing familiar ideas at a high level and dropping them into an alluring world. Developer Bilibili has pulled a nice surprise out of its hat.

Graphics: Backgrounds are packed with detail and give a great sense of depth to the diesel-punk world, though some character animations lack polish

Sound: Solid voice-acting brings the Furitzens to life, and the understated soundtrack of Chinese and jazz-tinged melodies add nice atmosphere

Entertainment: Punching through F.I.S.T. only gets better thanks to its evolving combat. Mapping every inch of the world is an engrossing, good time