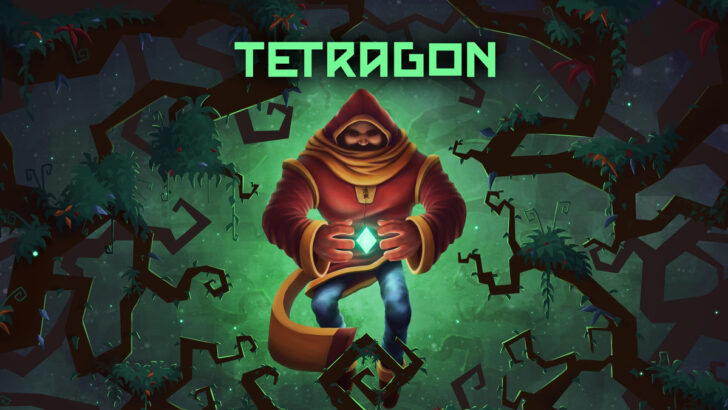 We are the team from Cafundo Studio and today we are going to tell you about Tetragon puzzle game. We have managed to combine a fascinating and touching story with a seemingly classic Rubik’s cube style puzzle game. The mechanics of the game are that we are allowed to rotate the world left and right and move the tiles so that our protagonist can get from point A to point B.

It sounds simple, but thanks to the elaborate design of the levels, we have created not only a beautiful environment, but also cunning logical traps. Every now and then, the player will bump into slabs, ledges, levers, and panels that allow him to take actions not necessary to create the optimal route.

What usually happens in puzzle games? You see the goal and within the first two or three minutes, you have a plan of action in your head. Moreover, if in the initial levels you act on a similar scheme, and the chances of making a mistake are minimal. From the middle of the passage, you’ll have to rotate the measurements back and forth in search of the right solution.

And some attempts will be fatal for you. Careless actions can lead to the fact that the character will fall from a great height, will get stuck far away from the panels without the possibility to turn the map back, will fall on a burning platform or sharp spikes… We did our best to make the player think his actions a few moves ahead.

And we, as developers, faced a global challenge: to make the process of thinking through the moves not boring. To do this, we turned to three main pillars: the visual component, the music, and the story.

In terms of visuals we had to rotate each level hundreds of times, constantly refining it so that it looked interesting from all sides. It’s a bit like drawing a portrait. Having drawn the profile and made a mirror reflection, all the imperfections are immediately visible. Here the eye is not straight, here the nose is crooked… it’s the same with the levels in Tetragon. Hundreds of hours were spent so that when you look at the world from any angle, voids don’t pop out in front of the player’s eyes, and upside-down plants and pictures don’t look silly.

Our goal was to make even the world upside down look beautiful and interesting to look at.

And so that it wasn’t static and too flat (as strange as it may sound for the flat world of Tetragon), we filled it with different events. For example, in the castle we’ll meet a charming thief, who will now and then watch us from the pictures and get out of the armor, looking for something to eat.

Such micro-events have another purpose – to distract the player. So that at the most crucial moment of thinking through the plan, you’ll have the thought in your head, “Ha! What a cute character, what’s he doing?” And that’s it! Your ingenious plan to pass the level failed.

Of course, we’re not that evil, so the main goal is to entertain the player and make the world more lively.

We had to sweat over the music component, too. The main problem with background music, which both the developer and the player may encounter, is annoyance. You should never get to a situation where the music starts to distract, much less annoy. We tried to make all the songs pleasant and melodic, so that they sound somewhere in the subcortex of the brain, but at the same time create the right atmosphere of mystery, and in some places – danger.

And the music was so successful and pleasant that it can be used for relaxation outside the game. The guys from the team at some point realized that it is even comfortable to read to it!

Finally, one of the most important components is the plot.

The story of our hero Lucius begins when his son goes missing. The woodsman goes to search for him in a mysterious portal and finds himself in the dimension of Tetragon. It would seem that we could end there, giving the player a backstory and an overall goal. But that would have been boring! After all, we have a whole new world in front of us! So we decided to reveal its story as much as possible, and give the player a few interesting plot twists… but without spoilers.

As the game progresses, we will meet different characters, such as the previously mentioned thief. From them we will know the history of Tetragon and at some point we will realize what really happened here.

Without going into too much detail, Tetragon is the sacred crystal at the center of this world. It was from it that the dimensional layers received the energy that made everything around them flourish. But the world cannot last forever, such are the laws of the genre. At some point, a mysterious energy appears, giving life to a dark entity. The only purpose of this entity is to destroy the crystal and wreak havoc in the world.

Tetragon, in turn, also possesses an essence that understood that it would be difficult to cope with the enemy. She managed to sharpen the darkness at the cost of the crystal itself, pieces of which were scattered throughout the corners of this layered world.

Lucius the forester finds himself in a flat dimension just after the destruction of the crystal. Now he has to find his son, find out what really happened and try to restore this world. Will he succeed? It’s up to the player…

We have tried to combine all of these pillars together so that they feel like one. The world itself and the events in it are reflected in the environment. For example, each successive level of the dimensional bulb is visible against the background of the current location, creating a sense of diving to the center. Perhaps this is what influenced the fact that during the game shows at various exhibitions, guests spent much more time at Tetragon than at the neighboring games. Breaking out of the combination of riddles that look simple at first glance and the colorful fairy tale style is really difficult.

The game is already available, so we look forward to seeing your first reviews!

$11.99
Get it now
Welcome to Tetragon – a vast mysterious universe of unique game mechanics, puzzles, magical mazes, and challenges! It’s a real challenge for those who enjoy the games in the vein of The Room, The Witness and The Talos Principle.

Your goal is to move planes with a spinning world gravity . Using the power of TetraGen move the ground and the towers to guide the brave lumberjack Lucios through the scattered worlds and find his lost son!

About Tetragon:
Somewhere in the parallel universe there is a world made of the plane realities. These planes float around the sacred jewel – TetraGen. Since the dawn of time it had been a prosperous world with no place for anything evil in it… until out of nowhere a mysterious dark energy started to grow in Tetragon. After a while it had spawned the most bizarre creature intending to destroy the TetraGen and plunge the world of Tetragon into the chaos! Eventually, this creature had reached its goal and the TetraGen jewel was broken into the pieces. Only by using all of its powers the Will of Tetragon managed to imprison the dark creature but it was too late. Now someone brave has to fix this broken world by retrieving the pieces of TetraGen…

It’s up to you now to solve the puzzles and bit by bit reach the ultimate goal of your journey.

With the power of TetraGen you can change position of the planes and towers create the platforms and stairs and even spin the world on its axis!

Related:
Getting Nostalgic About Developing the ‘90s-themed The Big Con
How It All Started for Cardaclysm: Shards of the Four
Art of Rally: The Racing Game Created in a Van on an Epic Road Trip Across North America