Fall For Indies: Kena: Bridge Of Spirits, Sable, And More This September 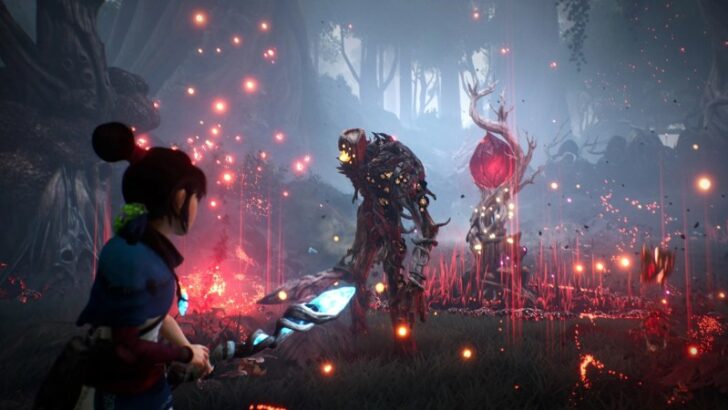 Fall officially begins this week, and with the temperature cooling, it’s a great time to stay indoors and plunge into video games. There are a ton of exciting projects coming out this year, and we thought it would be a great time to highlight some easier-to-miss titles. Like leaves from a tree, indies can fall onto the gaming scene in a flurry, sometimes making it difficult to get an idea of what is out there. This year, we are happy to help rake up a big pile of these independent titles for you to jump into. Over the next few months, we will take a look at what’s going on with these games. We’ll dive into what’s launching and tons of exciting indie scene news. From triple-I releases to lesser-known titles, get ready to celebrate fall’s indies.

Grab a Pumpkin Spice Latte, And Let’s Catch Up

There is already a heap of great indies available now as we head into the autumnal season. With unexpected, last-minute announcements and long-awaited releases, it’s been an eventful few weeks. Here is a helpful round-up of indie news you might have missed alongside games to help kick off your fall festivities.

Relaxing and engaging, this black-and-white adventure game places a camera in your hand and invites you to travel through the world, helping people with your photography skills. The game is short, lasting only about four hours, but it never feels rushed or unsatisfying. Setting out from your comfortable home, you embark on a journey that will take you through a woodland park, beachfront destination, and big city. But your final destination is the tallest mountain in the region, the famed location of the Toem phenomenon.

Released last week, Eastward earned the title “Pixel Paradise” and an 8.5 score in Game Informer’s review by Dan Tack. The gorgeous pixel-style game follows an unusual duo attempting to escape their stifling, post-apocalyptic society. You’ll need to solve puzzles and battle baddies on your journey East. To do this, you switch back and forth between the one-time miner, John, and a young girl with mysterious powers, Sam.

Toby Fox, the creator behind the wildly popular game Undertale, revealed on September 15 that he planned to drop Deltarune Chapter 2 in two days. Fans were set buzzing with the unexpected news, excitedly counting down the hours until September 17, when they could get their hands on this anticipated follow-up. Deltarune’s first chapter launched in October 2018, so the speedy release of its next chapter was welcome news.

Also in the exciting new content category, the Viking adventure, Valheim, released its Hearth and Home expansion on September 16. Planned since the initial Early Access launch, Valheim developers pushed the update’s release back several times. The team explained this by pointing out they were overwhelmed with the explosion of interest in Valheim and the work it took to keep the base game running smoothly. As its name suggests, Hearth and Home introduces features to make your self-built shelter a little cozier, including additional furniture options, a device to destroy unwanted items, and the ability to tame your very own lox.

A Crop Of Promising Titles

Hitting in the tail end of September, there are a few indie releases that coincide perfectly with the beginning of fall. Here’s a look at all of this month’s upcoming titles.

Though initially set to release in 2020, Kena: Bridge of Spirits is ready to launch on September 21.  You play as the titular spirit guide helping souls move on to the afterlife with the aide of adorable creates called Rot. The beautiful environment is inspired by places like Bali and Japan but is not an open world. Speaking of inspiration, when we spoke to the developers, Ember Lab, they mentioned that The Legend of Zelda series was a reference point for the team.

Combining a unique aesthetic, open-world exploration, and a story about identity, Sable is one of our most anticipated games coming this year. Shedworks, a development team made up of two people, announced the game three years ago. It contains no combat elements but instead encourages the player to wander through a vast and striking desert on a hoverbike. Populated with ancient, secret-holding structures and personality-filled characters, Sable has plenty for players to discover when it launches on Game Pass on September 23.

So, you decided to become a firefighter, but not the kind that gets rigorously trained and has professional, life-saving tools. No, you opted to become a Respondr with an app called Embr. As a new gig worker in the business of putting out fires, you and up to three friends must respond to clients’ emergencies, saving lives and property as quickly as possible in order to get the largest amount of money. Though it’s been on Steam Early Access for some time, the game is officially coming to consoles on September 23. With its ragdoll physics, silly requests, and outrageous gadgets, Embr is the best time you’ll ever have fighting a fire.

On September 30, become one of the fated eight in Astria Ascending, a JRPG with a striking hand-drawn art style. The game boasts a creative team loaded with veteran talent, like Final Fantasy writer Kazushige Nojima and composer Hitoshi Sakimoto best known for Vagrant Story, Final Fantasy XII, and Valkyria Chronicles. Joining them is Akihiko Yoshida, whose creative talents brought us characters in Nier: Automata and Bravely Default, as well as the art for several Final Fantasy titles.

Called an “alchemist simulator” by its developers, Niceplay Games, Potion Craft enters Early Access on September 21. While that means it will be up against Kena: Bridge of Spirits, which is launching that same day, Potion Craft may be worth a look for indie fans. The game’s graphics look like they popped out of a Medieval manuscript and asks you to set up shop as a town’s local tonic creator. You’ll gather ingredients from your own enchanted garden, build up your collection of alchemical tools, and try to keep the customers coming.

Don’t be fooled by the painterly design or endearing, green protagonist; Teacup delves into a truly dreadful problem: you are out of tea. The main character, Teacup, is a reserved frog that intends to host a tea party, which is a problem if you don’t have any to serve. Narrative-driven and exploration-focused, Teacup will send you all around its beautiful world looking for the herbs on September 23. If you don’t have time to see many games through to the end, Teacup may be for you since it promises to be a short experience.

Have you run through Deathloop, 12 Minutes, and Returnal but can’t get enough of that sweet time loop gameplay? Good news! Lemnis Gate is a turn-based competitive shooter centered around time and constantly repeating actions, and it is coming out September 28. You have 25 seconds in one round to perform a move that will continuously loop as the game progresses. Your opponent then tries to neutralize you or set up their own action loop in their 25-second round. Each time the gameplay passes to the next player, the map becomes increasingly choked with mayhem, so good luck staying alive.

“Should you pull at the thread and unravel the solar system’s deepest secret,” askes Outer Wilds developer Mobius Digital, “or is some knowledge better left in the dark?” Revealed at Annapurna Interactive’s recent showcase, Outer Wilds’ DLC, called Echoes of the Eye, is coming September 28. At the heart of this mysterious expansion is an unexplainable image, an anomaly that will send you off on an entirely new adventure. Outer Wilds’ first and last DLC, Echoes of the Eye promises players more content, without disrupting the original game’s narrative.

One of fall’s biggest festivals, Halloween, is about celebrating all things spooky – and In Sound Mind definitely fits that description. Waking up in an unfamiliar place is pretty jarring on its own, but this psychological horror takes it one step further by pushing you to investigate several deaths on top of navigating a disorienting structure. There is one upside: you get to pet the cat. By solving puzzles, fighting bosses, and delving ever deeper into the game’s mystery, you may escape the dark machinations of your own mind.

Falling on the last day of September, Bonfire Peaks is a puzzle game about letting it all burn. Despite its maniacal-sounding premise, this voxel art indie gives off chill vibes. Its director, Corey Martin, even promises the PlayStation version will have a helpful Activity Card for each puzzle, in case you get stuck. But what do you do? Simply put, you climb your way through a world made up of over 100 challenging levels, throwing your belongings into fires as you go in an effort to let go of the past. Bonfire Peak creators insist this 10-hour game will be a feast for the eyes and a workout for the brain.

Are you excited about any indies this fall? Shout them out in the comments!