FIFA 22 Review – Short Of The Goal 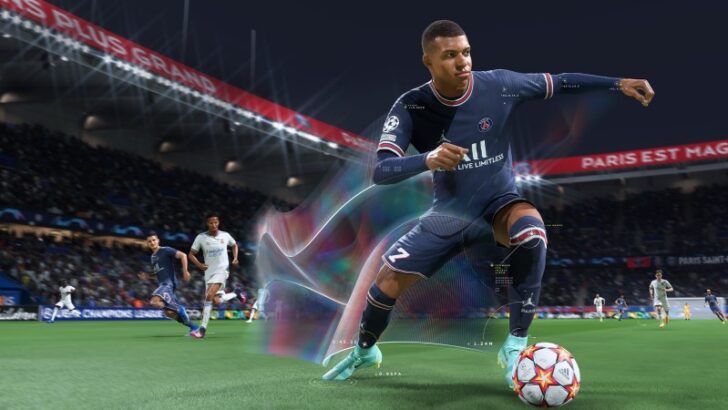 Sports simulators have gradually garnered the ire and skepticism of their target audience. The EA Sports brand is no stranger to public scrutiny as its many franchises continue to disappoint a bevy of fans. Atop an ever-growing list of grievances are intrusive, pay-to-win microtransactions, neglected game modes, and a lack of significant enhancements that distinguish each new entry from its predecessor. In more ways than one, FIFA 22 looks and feels a lot like the previous installment. “HyperMotion Gameplay Technology” supposedly generates thousands of new animations; it helps create more life-like behaviors on the pitch. Still, no amount of technobabble and exaggerated visual effects can hide the downward trajectory of gaming’s most famous football IP.

FIFA 22 starts strong with a playable primer focused on fundamental mechanics and the latest features. The tutorials slip cleverly into the overarching narrative – your created avatar is late to an important training session with the legendary Thierry Henry and two-time cover-athlete Kylian Mbappé. You rush down Paris’ lively cobblestone back alleys accompanied by football freestyler and social media personality Lisa Zimouche. Though brief, sprinting past restaurant strips while maintaining ball control and honing pass techniques with excited Parisians was a blast. This introductory cinematic reminded me of the fun Alex Hunter story from many years ago. When it abruptly ended, I couldn’t help but yearn for another full-length narrative.

Regrettably, FIFA 22 is devoid of plot. Volta, my favorite mode from last year – small-scale arena soccer – is missing its mildly entertaining rags-to-riches story. This time around, I had to take down AI and player-controlled teams without the motivation or structure a central plot would afford. New “signature abilities” gave me more customization options in addition to my character’s sprawling skill trees. And while I enjoyed unleashing the powers of brute strength (Power Strike), unrivaled speed (Pure Pace), and defensive mastery (Aggressive Tackle) to demolish my opponents, Volta wound up feeling incomplete.

Playing traditional 11v11 football helps quell some of my frustrations. FIFA 22 opts not to reinvent the wheel because it doesn’t have to. Moving down the pitch as a unified front remains tight, dribbles are still appropriately challenging (and marvelous to look at!), and the spectacle of each match is commendable. I was immediately immersed in the experience as full stadiums came to life with synchronized chants, bouts are bookended with dazzling firework displays and award ceremonies, and detailed facial expressions instill each footballer with personality. The HyperMotion Gameplay Technology makes players look more realistic as they go for sliding tackles, flashy crossovers, or angled scores, but that next-gen varnish eventually wears off; there’s nothing here you haven’t seen already.

My Career got a couple of welcome features. Throwing on a pair of cleats and taking to the field as an up-and-coming prodigy means that you’ll have to gain the trust and approval of the coach/organization. Objectives ranging from keeping a high-performance rating to acquiring an arbitrary number of assists gave in-game minutes more weight. Between each match, I upgraded my player with attribute-increasing perks to expedite the path to becoming a starter. Whenever I came off that bench, I prioritized unselfish play and worked hard at avoiding silly turnovers. Watching my avatar’s rapport with his teammates and supervisors gradually strengthen throughout the pre-season and regular season was the highlight of FIFA 22. Playing as a club manager, however, remains relatively unchanged. This isn’t necessarily a bad thing. Balancing roster fitness (stamina) and sharpness (gameday performance) while actively scouting for talent and staying financially stable continues to be a stimulating administrative exercise. The new create-a-team/-stadium option is a definite bonus, but this doesn’t enhance the gameplay or micromanagement mechanics in any way.

Of course, if you want to ascend the FIFA 22 ladder, participating in Ultimate Team is the fastest way to do so … if you don’t mind spending copious amounts of real-world money. Ultimate Team’s microtransaction formula remains the same – purchase packs that’ll reward you with uninteresting kits and stadiums instead of star athletes, enter bid races for rare cards, and dedicate hundreds of hours to competing solo or against other high-tier collectors. Big spenders constantly reap the rewards, and the rest are subject to an unforgivable, overt grind. If you’re a casual FIFA player, do yourself a favor and steer clear of this troublesome game mode.

FIFA 22 offers minor tweaks more than anything else. For every substantial update – new goalkeeper mechanics and female footballers in Pro Clubs – EA Canada bafflingly takes several steps back. Even something as rudimentary as the main menu UI remains untouched! I loved going pro as a bright-eyed, bushy-tailed rookie, but it didn’t take long for me to want to hang up that coveted jersey.

Summary: FIFA 22 might tout next-gen visuals and solid gameplay, but there aren’t enough exciting changes to differentiate it from last year’s experience.

Concept: Race down the pitch to the opponent’s net … again. But, this time, with next-gen visuals and animations

Graphics: The footballers look better than ever, especially during team celebrations. Strands of hair fluttering in the wind and bouncing during light jogs is a nice touch

Sound: The commentators don’t always match the excitement of play, but the roaring fans never let you down

Entertainment: There aren’t many notable changes in FIFA 22. My Career is still the most dynamic mode, and that’s not saying much