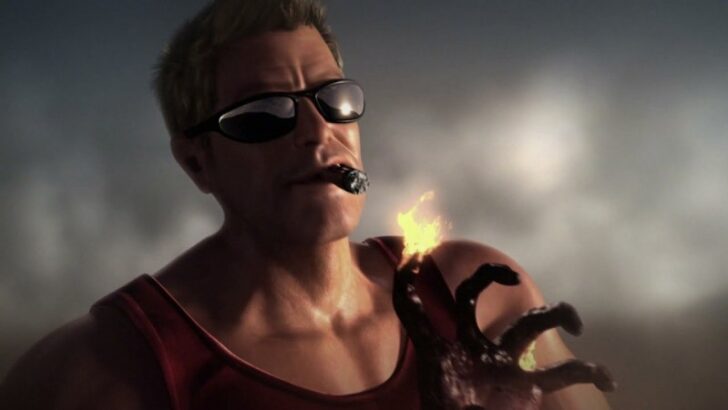 A trailer has surfaced for the canceled Duke Nukem prequel from Gearbox, a title that never saw the light of day over legal disputes surrounding the character himself. Though the Duke Nukem game was canned, that hasn’t stopped it from sprouting up a few times over the years. This time, however, is a full trailer that shows off what could have been.

The video at the top of the article shows what the setup would have looked like for Nukem’s prequel story. Called Duke Nukem Begins, the origin story was meant to flesh out what we knew about the Duke himself, but unfortunately, it couldn’t climb its way out of development hell. The trailer for the canceled game, directed by Gregor Punchats, shows off a full story proposal for the prequel. He has shared tidbits of this very same video in the past, most recently in 2019, but now he has decided to share it in its entirety with the world.

“In 2008, when I was working for the good folks at Janimation in Dallas Tx, we were hired by Gearbox to create a vertical slice (an animated version of what the game will look like) for the game Duke Nukem Begins, a Duke origin story,” reads the trailer’s official description from Punchatz.

He has leaked pieces of this canned game a few times for one simple reason: he is proud of it. He has stated in the past that he hopes that these leaks could potentially generate enough interest that possible it could be revisited. Whether that happens or not remains to be seen, but it would be good to see ‘ol Duke back in action. An origins story could also be just the thing needed to provide a meatier backstory to the character, maybe even giving him enough propulsion into a new generation of gaming.