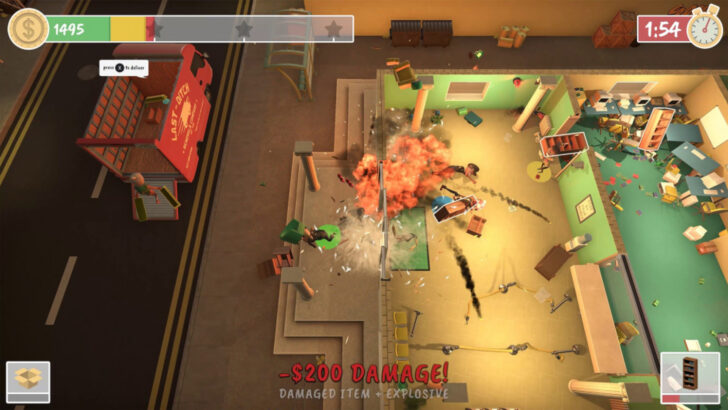 Get Packed: Fully Loaded is the expanded edition of the couch co-op removals game that’s full of calamity and physics-based carnage for 1-4 players and is coming to Xbox One and Xbox Series X|S on July 29!

So what makes Get Packed: Fully Loaded a must have game for 2021? Read on to find out more about this explosively fun removals game.

The mixture of carnage and competition between friends in Get Packed: Fully Loaded is really what makes this game fun to play. Split into teams in versus mode to see who can pack more in the time you’ve been given, play through the story and pack to save your town in campaign mode, or if you just want to break stuff and set off a bunch of fireworks then destruction mode is the one for you.

The silly physics and sheer silliness of the scenarios that you and your friends can create are guaranteed to be a fun time with lots of laughs spread over 18 levels of explosive carnage!

What is Get Packed: Fully Loaded?

Get Packed Fully Loaded takes place in the charming town of Ditchlington, but when a greedy salt mining company takes over the town, Last Ditch Removals must handle the hostile eviction. With little time and even less caution, your ragtag removals team gets to work rapidly relocating the entire town… leaving a trail of destruction, explosions, and debris in your wake!

The ’90s backdrop and zany customizable character outfits really add some nostalgia and eccentricity to the game (and keep you looking hella’ fresh of course). The local cats aren’t the only ones who will try and make things difficult for you either, there have been rumors about hauntings over at the old Manor House for years and even some UFO sightings…