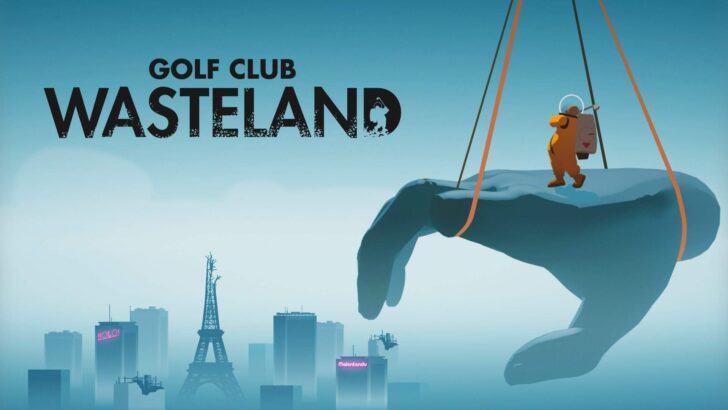 Most human life is wiped out and Earth is now a golf course for the ultra-rich. Putt around the remains of civilization while Radio Nostalgia From Mars broadcast keeps you company will chill tunes and interesting stories from those who survived. Golf Club: Wasteland is a cozy apocalypse golf story with a deep story and a dash of humor, available now for Xbox One and Xbox Series X|S.

“Most human life is wiped out. Earth is now a golf course for the ultra-rich.”

That has been the elevator pitch for our game pretty much since we started development of Golf Club: Wasteland. The idea being that the ultra-rich fled to a private colony on Mars as Earth fell, and now they venture back to the ruins of our world for a round a “urban wasteland adventure golf.”

Well it’s golf game, but also not. There is a rather deep and impactful story that talks about some big issue topics like climate change, Silicon Valley culture and inequality. But it also looks at some more personal topics like loneliness, nostalgia, loss, and despondence. But fret not. This is not a gloom and doom type of game. We intentionally wrapped our story around a fun and relaxing golf gameplay, a cozy apocalypse art style with little Easter eggs and jokes throughout the levels. And most importantly, a laid-back radio broadcast that’s choke full of chill, relaxing music and interesting stories.

Our radio broadcast is actually on the most cherished parts of the game for the team. We worked literal years on getting it just right. Titled “Radio Nostalgia from Mars,” the broadcast is run by smooth, silky voiced radio DJ who happens to also be our audio director. He feeds you some very bopping tunes throughout your round of “putt putt-poclypse” that we wrote and produced ourselves (you can get a taste here and here). Then in between the music you’ll get stories and updates about the Mars colony but also from the survivors who fled Earth as they reminisce over what they remember the most about their time there. It’s around 2+ hours of audio content.

We’ve got 3 modes. Story, that lets you just putt at your own pace with no score keeping, unlimited shots and even an option to skip levels if the game notices you might be struggling with the more complex levels. Challenge mode gives you a par per hole. If you don’t sink the ball within the allocated shots, your ball self-destructs and you restart the level. And finally, Iron Mode. For the crazy among you. A set number of shots too but with the added pressure that if you lose your ball in water, toxic sludge or it just gets eaten by the various creatures still roaming the earth – it’s all the way back to level one.

Each copy also comes with 2 free digital goodies. A digital graphic novel that wraps up and lays bare the story of enigmatic character Charlie. And also, a download link to the full soundtrack you hear through out the game.

So if you want a laid-back golf game, with chill music and an interesting story that looks at the world we live in right now, maybe give it try. The game is out now for Xbox One and Xbox Series X|S.

$7.99
Get it now
Urban Wasteland Adventure Golf
The rich fled to Mars but venture back to a desolate Earth for a round of golf. Each hole in the wasteland offers its own little story and possible puzzle to sink the perfect shot. Play through destroyed brutalist monuments, crumbling shopping malls, and abandoned museums as neon signs and poignant graffiti take swings at current events, Silicon Valley culture and humanity.

Three Stories Make a (W)hole
Piece together the full story of how humanity fell through three distinct sources – Details from the lone golfer’s story, who’s come back to Earth for one last game. The Radio Nostalgia from Mars broadcast gives a glimpse into the lives of those who escaped, and the narration of a “secret spectator” watching from a distance.

The 1% Killed the Radio Star
Be accompanied by a purposefully composed soundtrack as well as personal stories broadcasted on Radio Nostalgia From Mars. The station caters to citizens of Mars, nostalgic for Earth as they listen to music from the 2020s, and dial in to share their memories of the planet. A smooth voiced radio DJ keeps the show flowing with updates and announcements hinting to a not so glamorous life on Mars.

Fits Like a Glove
Three distinct modes mean every golfer can find something for their tastes. Casual players can focus just on the story and a relaxing scenic round of golf in Story Mode. Those looking for an extra challenge can beat each hole under par using skill and puzzle solving through Challenge Mode. While the total pros can try Iron Mode, where there’s almost zero room for error. Easy to grasp controls and a minimalist UI underpin the whole game so anyone can easily pick up and play at their own pace.

That’s a Keeper
Included with every copy of the game is the digital Golf Club Wasteland Official Soundtrack plus a Graphic Novel Art Book that further expands the back story of the lone golfer Charley in stunning visual format.