Grand Dames Interview: Ageism In Gaming, Skyrim Grandma Has A Sword, And The Beauty Of The Gaming Community 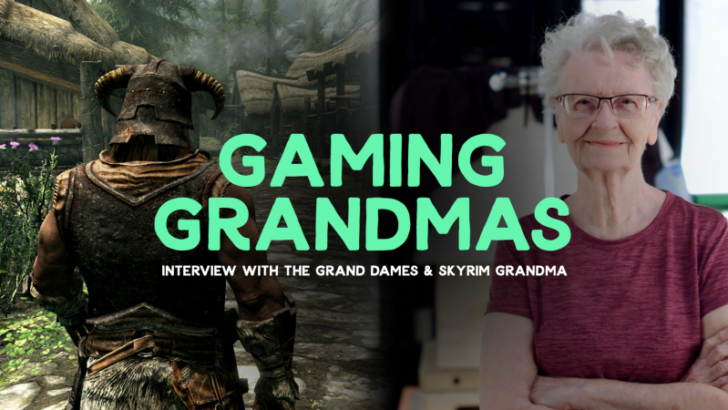 From Grandma Shirley talking about her love of killing people and her hidden dagger to Miss Jessa talking about the beauty of the community they built, here is why you should be paying attention to the Grand Dames.

Everyone knows Shirley, AKA Skyrim Grandma, by now. Her community loves her so much, for good reason, because of the calming gaming experiences she has to offer the public through her adventures in Tamriel. In fact, she is even a fully voiced follower in Skyrim now thanks to this mod, and she’s even going to be an actual character in The Elder Scrolls 6. But what you may not know is that she’s a part of a group of phenomenal women called the Grand Dames, and we sat down with these amazing gamers to learn more about their journey and hear more about their thoughts on the gaming community.

You can learn more about these amazing women right here, but here’s an intro into each Dame before diving into our video interview!

According to the official Dames website: Dame Haughty has been gaming for over 40 years, starting with Pong and moving on to many types of games from survival, MMORPGs, RPGs, and simulations. She plays and streams World of Warcraft and Final Fantasy 14, but also loves Fallout 4 and 76, Minecraft, and Rust. She has built a very chill, inclusive & safe community, called the Coop, which joins her for livestreams on Twitch. Haughty proves that you can play your game however you choose and loves to show the many different ways one can enjoy games.

After returning to college in her 50s to get her Bachelors in Social Work and a Masters in gender and sexuality, she is now studying for her Ph.D. in domestic violence and social work practice and loving every minute of her academic studies.

You can find Dame Haughty, her beloved husband Mal, and her community at Twitch.com/HaughtyChicken or on Twitter: @HaughtyChicken.

Dame Jessa loves the roleplaying and storytelling aspects of gaming. Rather than the highest score, Jessa seeks the deepest side of any character she is playing. From her epic elf Mala the Dragonborn and Kinlen the swordswoman and spy in Skyrim to her quaint and tiny little Sims 2 villages of Acanthop and Kettle Falls, Jessa is always looking for more connection with her fans through voice-acting her endearing stories and her love of Indie games. She brings her technical and communication skills to the tea table by being the host of The Grand Dames monthly livestream and administering their channel. When she is not attending to the needs of The Grand Dames channel, Jessa tells her stories on YouTube at The Jessa Channel, and posts cat pictures that make her giggle @TheJessaChannel on Twitter. You can learn more about Jessa at TheJessaChannel.com.

Dame Merrie is a team player—literally. She loves co-op gaming and the joy of playing with others for a shared goal, and shooting skags and outlaws in Borderlands with her gaming group, the Borderlands Babes. Merrie loves all things gaming merch: hats, plushies, pins and tons of gaming gewgaws, and while at one of the many games conventions she attends, she will happily put on her chicken hat while sharing how she conquered nations in Civilization 5! Dame Merrie has a keen eye, a warm heart and a quick trigger finger. You can catch Merrie live from time to time on Twitch.tv/LadyMpire or touch base with her on Twitter @LadyMpire.

Dame Shirley Curry has nearly a million grandkids that she greets with a gentle smile and the words, “Good morning, grandkids” every episode. Shirley loves The Elder Scrolls V: Skyrim because it gives her the chance to do what she loves most: tell stories and wander the windy, snowy, rugged lands of Skyrim taking photos of every beautiful vista she sees. She loves to share her screenshots on Twitter with her many caring fans. What Shirley loves most about being a Dame is the opportunity to actually visit with fans in the afterparties when the monthly livestream is finished. Shirley wants to hear the stories of those who love what she loves, the gentle joy of gaming. Shirley can be found in many newspaper and magazine articles that celebrate the fact that she is still gaming and thriving at 85 years of age. Shirley can be found hanging with her followers on Twitter @ShirleyScurry.

So join Alex Stadnik and Liana Ruppert as we sit down with the Grand Dames themselves to talk silliness, the love of games, and get real about some of the uglier aspects of the industry such agesim. It’s a great chat, we hope you enjoy what they have to say and fall in love with this group like we have!