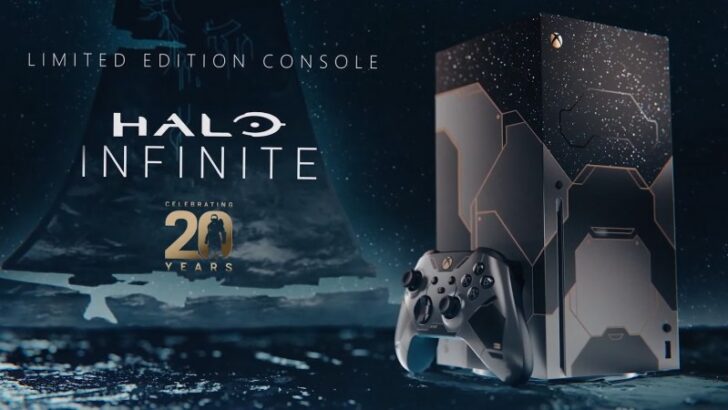 Today’s Opening Night Live showcase gave us a look at several Halo related things, including our first look at a brand-new limited edition of the Xbox Series X. Built to celebrate the 20th anniversary of both Xbox and the first release of Halo: Combat Evolved back in 2001, the new edition of the console features the same functionality as the existing new Xbox platform, but comes with the console and controller featuring a snazzy new gray, black, and gold color scheme, very much in keeping with the graphic design direction of Halo Infinite. Supposedly, the custom starfield matches what players can see from the surface of the Zeta Halo that players will be exploring in Halo Infinite. There’s also a blue fan vent “inspired by Cortana,” though after several adventures at her side, we can’t say she’d be thrilled by her inclusion as a place to push hot air through.

The limited-edition Xbox console is as available for pre-order now, through participating retailers, including directly through Microsoft. The Halo console will sell for $549.99. If you’ve yet to make the jump to Microsoft’s new console, you can check out our review of the console from when it initially released back in 2020.

Both PlayStation 5 and Xbox Series X consoles have been hard to come by in the early months of release, so it should come as welcome news that a new version may enable some would-be purchasers to finally snag a new-gen system, especially if those gamers happen to be Halo enthusiasts.

You can read more about Halo Infinite and what was shown of the game at Opening Night Live right here.