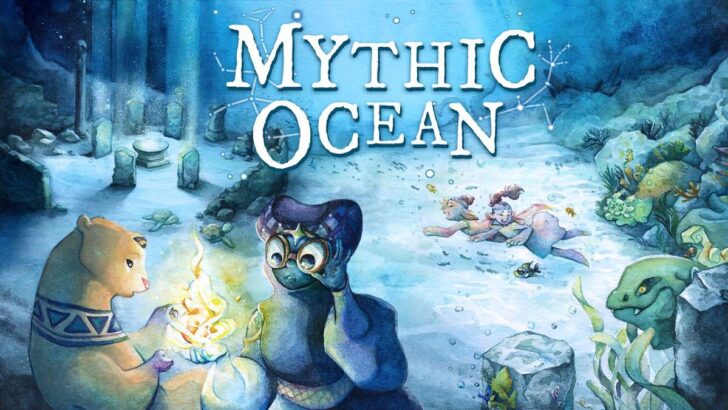 Mythic Ocean Character Artist/Animator Robyn Haley & Writer/Composer Darren Malley describe how their underwater adventure game is about empathy and creation.Players freely explore a vibrant ocean and lend their advice to a pantheon of gods. Their choices lead to thousands of possible endings.Mythic Ocean is now available on Xbox One. A free Demo called Mythic Ocean: Prologue is also available.

What would you do if you could talk with the gods, and your influence on them could change the cosmos? Mythic Ocean is an atmospheric adventure where players befriend a pantheon of gods under the sea, help solve their problems, and make choices that shape the birth of a new world.

This title combines free open-world exploration with the dialog-focused gameplay of a visual novel. As you discover new areas and meet new creatures, you will also encounter different gods with their own unique personalities and situations. They will share their motivations and problems and ask for your opinion. The advice you lend constantly alters the tale being told, and most importantly, determines which of these gods will rise above to create a new word, and what kind of world they will create.

Mythic Ocean takes place in an ocean world in-between time. There’s a mystery to what came before and what will come after, with thousands of unique possible endings. Mythic Ocean is meant to be a cycle. Any particular ending is not really the end. Not happy with the world your choices created? Try approaching the various gods in the game differently. We’re excited about the replay value offered to the players.

In this game, there is no death, no combat, no failure. Here, it’s all about dialogue and influence. What do you think others should do and how do you present it to them? Who do you want them to become (keeping in mind that you can’t force them)? Mythic Ocean encourages empathy and players will likely have to answer questions about themselves while they decide upon their replies to various characters. Conversations can be amusing and relaxing but also dive deeper into meaningful and philosophical themes. We believe that gamers of all ages can find their own food for thought.

Our players are storytellers too – we made a narrative they can explore and shape, creating an experience unique to them. Mythic Ocean is both a love letter to the beauty and power of the sea, and a game about how any individual has more influence than they realize. We invite you to come as you are and play a big role in the creation of a new universe.

Freely explore a vibrant ocean. Have relaxing, deep, and amusing conversations with six different gods and a cast of sea creatures.

The advice you give continuously alters your story and leads to thousands of possible endings, ranging between harmony and pandemonium.

Which god will rise above? What kind of universe will they create? Discover the outcomes of your choices.

“…a world full of life, color, music, and meaning that is sure to stay with you for years to come.” – 10/10 GameSpace

“…a lovely, daft, interesting, deep and complex game, with no combat, no death, just choices and consequences.” – 8/10 Buried Treasure

“…traversing the ocean depths is serene and relaxing, and encountering the game’s myriad of weird and wonderful creatures is continually delightful.” – 8/10 GameSpew

DEVELOPED BY Paralune
“Our players are storytellers too – we make narratives they can explore and shape, creating an experience unique to them. Mythic Ocean is both a love letter to the beauty and power of the sea, and a game about how you, as a person, have more influence than you realize.” – Robyn Haley, Darren Malley and Matt Smudz

PUBLISHED BY Nakana.io
“We publish games that aim to offer a new experience. Diving into Mythic Ocean almost feels like entering a state of meditation where deep thoughts and bonds can be forged.” – Mikaël Bourget, founder of the publishing label