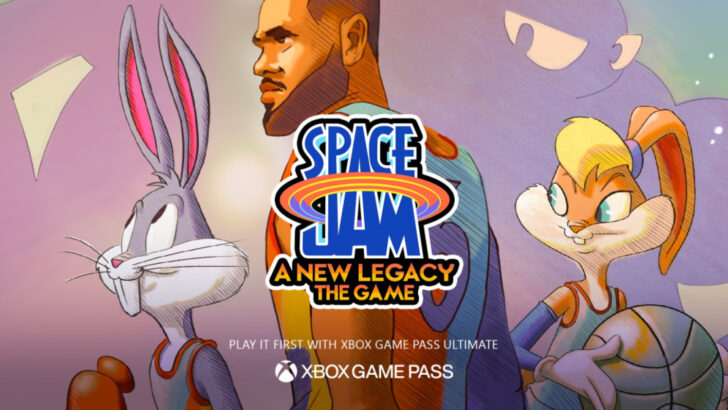 “Space Jam: A New Legacy” is releasing in theaters and on HBO Max in the U.S. on July 16, and I’m really excited to share what Xbox and Warner Bros. Pictures have in store to celebrate the movie, as well as the video game inspired by the film. We are so exhilarated by the film that we are introducing three exclusive Xbox Wireless Controllers and we’re planning a special update to Microsoft’s Coding Workshops. But before we get into that, let me give you an inside look at the film- and fan-inspired Space Jam: A New Legacy – The Game.

It’s Tunes Vs. Goons in Space Jam: A New Legacy – The Game

This past December, Xbox, LeBron James, and Bugs Bunny – the ultimate dream team– invited real-life game fans to submit their ideas for a Space Jam: A New Legacy-inspired video game. We are excited to showcase the same game logo, exclusive in-game character art, and gameplay as is shown in the new trailer.

We were flooded with entries from around the world, and many of them were really great. It was a tough decision. To create the final game, we blended the ideas of two gamers: our youth-competition winner, Narayan from India, and our adult-competition winner, Ricky from the United States. Xbox and Warner Bros. were energized by Ricky’s idea of a classic “beat ’em up” blended with game mechanics that Narayan had suggested. The game is inspired by the upcoming live action/animated feature film with deep reverence for the lively characters in Space Jam: A New Legacy and appreciation of the Tune Squad’s pop culture influence, all while reminiscent of classic arcade games of the 1990s.

Space Jam: A New Legacy – The Game features the beloved Looney Tunes characters Bugs Bunny and Lola Bunny and the newest member of the Tune Squad, LeBron James, as they face the Goon Squad in a wacky basketball beat ‘em up. A rogue artificial intelligence named Al G. Rhythm has trapped our heroes inside the Warner Bros. server, with little chance of escape. The Tune Squad must fight their way through a virtual army of Al G.’s creation while also searching for four pieces of “Legacy Code” that will allow them access to the nefarious villain’s secret location. Al G. has sent two members of the Goon Squad – The Brow and White Mamba – to stop the Tune Squad in their tracks. Fortunately, our heroes have access to a variety of moves, including a special basketball, and some rather unique Space Jam cards, to help them out. But will their teamwork be enough to stop Al G. Rhythm’s evil plans?

The talented group at Digital Eclipse, a game developer known for its dedication to preserving the heritage of gaming, helped bring the game to life. The team is composed of game industry veterans who grew up when arcades were flourishing, and they have recaptured the magic and spirit of games that were popular during that time. Digital Eclipse’s passion for arcade-style video games comes to life through the art, design and feel of the game.

In celebration of the film and upcoming game, I’m also excited to announce three exclusive Xbox Wireless Controllers inspired by “Space Jam: A New Legacy.” The new controllers are so fun. Each one has its own unique design, including:

All three controllers feature a hybrid D-pad and textured grip on the triggers, bumpers, and back case to help provide greater control and precision through every gaming session — and to help you make that 3-pointer. Seamlessly capture screenshots and clips and share all the arcade-style fun via the dedicated Share button. The controllers also include the fan-favorite custom button mapping via the Xbox Accessories app. Connect, play, and switch between devices including Xbox Series X|S, Xbox One, Windows 10 PCs and mobile devices (disclaimer).

Each “Space Jam: A New Legacy” Xbox Wireless Controller retails for $69.99 USD. All three will be available on July 8 while supplies last at Microsoft Store and Amazon in the United States. If you’re not in the US and want to get your hands on one of these controllers, international availability is listed below. Goon Squad and Serververse will be available only in the U.S. at Amazon.com (while supplies last); Tune Squad will be available at Microsoft Store and third-party retailers in North America, APAC, LATAM, and EMEA. To get a sneak peak of these exclusive controllers before they are available for purchase, check out our live unboxing featuring Principal Designer Elliott Hsu at Twitch.tv/Xbox from 11 a.m. to 12:30 p.m. PT today, June 23. For even more fun, check out our livestream of Space Jam: A New Legacy – The Game on July 1 from 11 a.m. to 12:30 p.m. PT.

Join In on the Fun with Microsoft Coding Workshops

One of the reasons why I am so passionate about this partnership with Warner Bros. is that we got a front row seat to the incredible creativity of hobbyist game creators around the world. It is always so inspiring to think about the power of game development as a tool for unlocking creative, academic or even career opportunities for people. So last December, we launched the Microsoft Store Space Jam: A New Legacy-inspired coding workshop with the help of Space Jam: A New Legacy characters, gaming industry pros and athletes—including tennis phenom Coco Gauff and basketball player Brandan Wright. Fast forward to today and I’m so proud to share that, in addition to the new arcade-style game, thousands of students have completed the workshop. This was an opportunity for people to learn game design and block-based coding, and it was so popular that students ages eight and older who missed the workshop will have another chance to attend when the class will be featured this summer in the Microsoft Store virtual summer camp series, Summer Passport to Digital Fun. And for more experienced coders, older teens and adults, we are adding three new on-demand modules to Microsoft Learn.

Space Jam: A New Legacy – The Game, the exclusive controllers and Microsoft’s latest Coding Workshops offers fans and gamers of all ages a way to get game-ready before the release of the film on July 16. Stay tuned for more Space Jam: A New Legacy partnership updates from Xbox and Warner Bros. in the coming weeks and welcome to the Jam!

About “Space Jam: A New Legacy”

Welcome to the Jam! “Space Jam: A New Legacy” stars LeBron James and is from director Malcolm D. Lee and the innovative filmmaking team that includes Ryan Coogler and Maverick Carter. This transformational journey is a manic mashup of two worlds that reveals just how far some parents will go to connect with their kids. When LeBron and his young son Dom are trapped in a digital space by a rogue A.I., LeBron must get them home safe by leading Bugs, Lola Bunny and the whole gang of notoriously undisciplined Looney Tunes to victory over the A.I.’s digitized champions on the court: a powered-up roster of professional basketball stars as you’ve never seen them before.  It’s Tunes versus Goons in the highest-stakes challenge of his life, that will redefine LeBron’s bond with his son and shine a light on the power of being yourself. The ready-for-action Tunes destroy convention, supercharge their unique talents and surprise even “King” James by playing the game their own way.

Warner Bros. Pictures Presents a Proximity/The SpringHill Company Production, a Malcolm D. Lee Film, Space Jam: A New Legacy.  The film will be distributed worldwide by Warner Bros. Pictures.  It will be released in theaters nationwide on July 16, 2021 and will be available in the U.S. on HBO Max for 31 days from theatrical release.

For information on Space Jam: A New Legacy, visit www.spacejam.com.