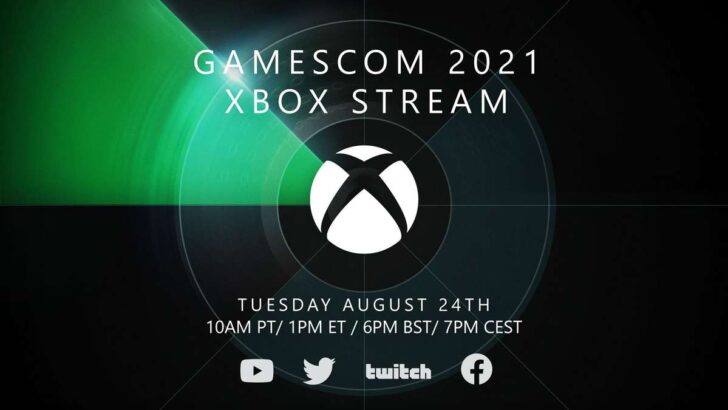 August is always a very special time for us at Team Xbox. This time of the year we would normally pack our stuff and meet our fans and community in Cologne, Germany at gamescom. This year, however, gamescom will be a 100% virtual experience that you can tune in to from all over the world. The good news is that Xbox will be at gamescom 2021 and you can join with your very own front-row seat as we share the latest updates and gameplay for some of the biggest games coming soon to Xbox.

Here’s an overview of what you can expect from us at gamescom 2021:

To warm you up for gamescom week we’ll be airing the official gamescom 2021 Xbox Stream, hosted by Parris Lilly and Kate Yeager. Join us on August 24 at 10:00am PT/6:00pm BST/7:00pm CEST to learn more about our biggest exclusive games line up ever.

You’ll get in-depth updates from some of our previously announced Xbox Game Studios titles alongside some of our third-party partners, including some of the incredible titles coming to Xbox this holiday, upcoming releases to our monthly subscription service, Xbox Game Pass, and much more.

You can watch the show on YouTube, Twitch, Facebook Gaming, Twitter, and select regional sites like VK.com in Russia and Bilibili in China. To make sure all of our fans around the globe can enjoy the stream, we plan to offer support for 30 languages, along with our English Audio Descriptions and American Sign Language. We hope to provide additional accessibility support for the live broadcast in additional languages.

You can also join our friends over at Bethesda Germany in a livestream program over several days, starting August 26. Tune in to Bethesda’s MainStream on Twitch.

Connect with the global Xbox community and special guests

Something that we always loved about the physical event of gamescom was the energy of the gaming community coming together. When we all met in the past, we were able to connect, talk and play together and celebrate one of our greatest passions: videogames. We couldn’t imagine gamescom without this and therefore, we’re happy to announce that we will be hosting a gamescom special edition Xbox FanFest this year – an activity that has had a long tradition during the in person show. We’ll be sharing more details very soon, so keep your eyes open on www.xbox.com/fanfest and Xbox social channels, including Twitter, Facebook and Instagram for the latest updates.

Save up to 75% during the Xbox gamescom Sale

After a packed week of news, gameplay videos, connections to friends and developers alike, surely you want to sit back and just play some great games, right? We still got your back: During gamescom we’ll run a digital Xbox gamescom Sale for our fans in Europe. You can score big savings of up to 75 percent on a range of iconic games for Xbox consoles or Windows 10 PCs. Details will be made available closer to the show, but you can stay up to date by bookmarking the Xbox Store sales and deals site now.

If you’re looking to join Xbox Game Pass and play 100+ high-quality games including all of our exclusive Xbox Game Studios titles from day one, you can try it out in your first month for only $1.