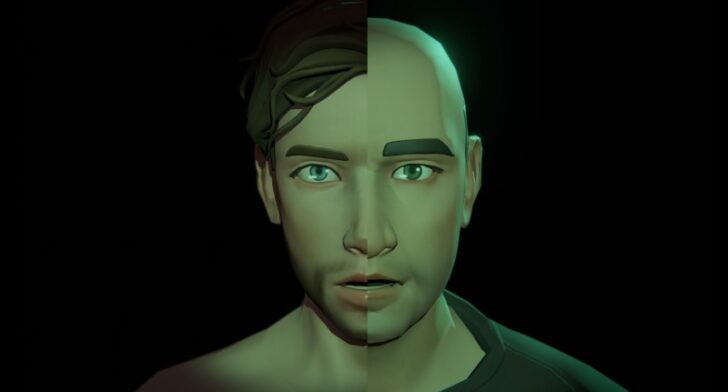 You know those games where you think you know where the narrative is going and the journey eventually becomes a predictable ride that feels like a chore? Variable State’s latest supernatural adventure is anything but. Last Stop’s story ties the fates of three strangers together, with life choices and perceived failures blending into a bubble of existential crisis that would make famed philosopher Albert Camus proud. Last Stop is a two-sided experience where one side is relatable monotony and the other offers unbridled chaos and imaginative conundrums.

Last Stop is a deceptively complex story set in present-day London. It starts slow, introducing players to John, Donna, and Meena. Each character is a stranger to one another, but they all have simplistic lives that speak to that looming existential dread we all know and put up with. The three tales are bound together by the supernatural, and the twists the narrative takes that make Last Stop feel like you’re playing a TV show. The game has intro cuts as you’d see on a British sitcom with character names and their associated actors. It has dramatic music that flares at just the right time, and it has story recaps that offer a helpful reminder of the “road so far” which is a nice touch given Last Stop’s episodic format.

The three main characters have nothing in common other than their monumental bad luck. Meena is the “career-obsessed” archetype; a woman who is driven by her ruthless ambition no matter the collateral damage. She’s torn between her goals and her past, a division that is felt by those closest to her. That wedge between her and those she loves grows deeper when suddenly she is forced to compete for a promotion she’s had in her sights for years.

Donna is a high-schooler that plays the average teenage archetype; a little bit unbothered in some ways, a little too bothered in others, and she’s simply trying to find herself whilst navigating her teens. In an effort to separate from the shadow of family, she throws herself into a complicated friendship with Becky and Vivek. That friendship is put to the test when a night of hanging out with friends goes terribly wrong after a mysterious stranger upends their lives.

John is a middle-aged father who is underappreciated and overworked. As a single parent, he resents his young, successful, and rich neighbor Jack. Instead of letting that jealousy play out naturally, however, fate has other ideas pulling a good ‘ol fashioned Friday the 13th body swap. The core of the three tales is the crux of what Last Stop has to offer: Supernatural destiny. While I won’t don’t want to reveal what the supernatural tie actually is because it would be a massive spoiler, I will say that’s not what you’d expect and that the revelation was wild. The twist ending also provides unique closures for each character, reflecting growth and their inner truths. I enjoyed that the three characters were so different from one another, it made each chapter feel fresh, especially when bouncing between John and Donna. I related to John’s resignation to the daily grind, but I found myself wistfully throwing myself into Donna’s naivety and youthful belief that anything is possible. Meena was a hard character to love, a lot of her choices were borderline cruel, though later in the story we learned why she is so guarded and that revelation made me appreciate her as a part of this story.

Each character’s story is broken into six chapters, allowing the player to choose from John, Donna, or Meena before continuing onto the next stretch of the story. Three choices help guide how these characters act in-game, usually depicted as diplomatic, sarcastic, or aloof, such as the ability to comfort someone in a time of need or to vindictively hold a grudge. For example, John (in Jack’s body) must choose between keeping his mouth shut about his toxic work environment or “play it safe” to keep his job. These choices command certain actions during pivotal parts in the story, though the truly game-impacting choices are reserved for the very end. If you’re looking to double back on a part of the story, there is no way to skip through dialogue, which is tedious when replaying a chapter. Luckily, this didn’t impact my enjoyment too much, because I found the pacing of the dialogue and the story calming in a way similar to British sitcoms, providing even-toned conversations between each character despite the wacky ongoing narrative. It also nailed the dry humor that those sitcoms are known for throughout each chapter, though these moments were peppered in and don’t detract from the mysterious nature of Last Stop’s storyline.

Mechanically speaking, Last Stop is as simple as it gets. Movement is limited to walking and is extremely linear to fit the guided experience similar to a TV show. At first, I felt this design was too straight-and-narrow and hurt the game. As I progressed through the story, however, the pacing made sense when looking at the bigger picture.

While traversing the world of Last Stop is limited, one exception to the game’s walking-only limitation is Meena’s analytical ability. This feature allows her to scan anyone she chooses to glean details from them: are they guilty? Lying? Scared? This ability doesn’t really impact the narrative, the choices are mainlined in a way to keep the story on course, but it does offer another look inside her mind and the almost clinical way she perceives the world.

Last Stop is dripping with existential philosophy juxtaposed against the illusion of a simple life. At 34, I identified, on some level, with all three characters, which made some of the more drastic decisions difficult, like choosing whether Meena is honest about the specific ways she hurts her family or Donna’s decision between her family and her struggles. How do you act when there is no right choice, there’s only the right choice for that moment? What if that “right” choice comes at the cost of someone’s life? Their happiness? What do you do at that moment when it hits you in the gut that the world is so much stranger and bigger than you believe? Last Stop isn’t for everyone; it’s a slow-paced narrative that requires a bit of time invested before the payoff. The conclusion of Last Stop, however, is unique, surprising, and it left me contemplating my choices in the game itself and in real life. It was a thoughtful journey, one that concluded on a satisfying note tinged with wonder and a renewed feeling of what it means to be human.

Summary: Last Stop is a two-sided experience where one side is relatable monotony and the other offers unbridled chaos and imaginative conundrums.

Concept: Three strangers are brought together by a chaotic twist of fate rooted in the supernatural

Graphics: The characters are more detailed while NPCs are left with featureless faces, providing an aesthetic to match the game’s existential nature

Sound: The music and sound effects make the player feel like they are playing an episodic TV series

Playability: A focused narrative that leaves no room to explore, designed to carry each character to their fated destinations

Entertainment: Last Stop blends classic British humor, the contrast of human mundanity, and the chaotic nature of the supernatural flawlessly