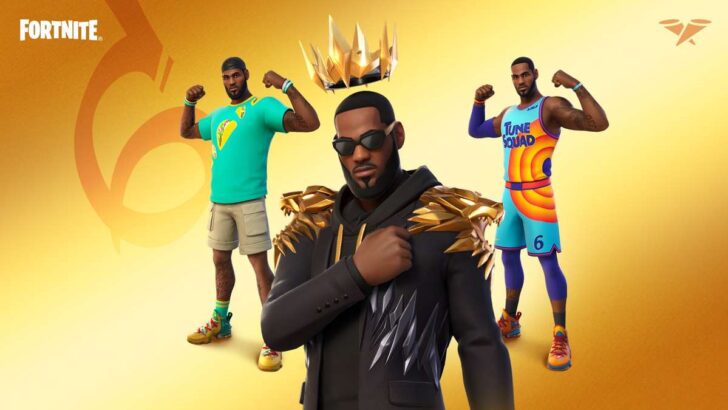 King James has arrived in Fortnite! Fresh off teaming up with the Tune Squad, the four-time NBA Champion and League MVP brings his legacy to Fortnite’s Icon Series.

LeBron in the Item Shop

Elevate your look with additional Items available in the King James Gear Bundle. It features:

The Lion PickaxeWingspan GliderQuiet the competition with LeBron’s emphatic on-the-court celebration, The Silencer.

For LeBron’s Outfit, Back Bling, Pickaxe, and Glider, add an extra layer of customization using a progressive edit slider. The slider allows you to add more than 20 gold variations to your look.

Available separately, players can suit up as Tune Squad LeBron before the premiere of his all-new live action/animated movie, “Space Jam: A New Legacy.”

Welcome to the Jam!

Look for all of LeBron’s Items in the shop starting Wednesday, July 14 at 8 p.m. ET.

☆☆☆☆☆
1970
★★★★★
Get it now
Xbox One X Enhanced
Fight in a cosmic war in Fortnite Chapter 2 Season 7: Invasion. Alien forces have infiltrated the Island while Doctor Slone leads the IO forces against them. Jump into battle by taking up both side’s tech: abduct your foes in a flying Saucer, blast enemies with the Rail Gun, create your own Alien in the Battle Pass, and more. As the Season progresses and the war escalates, new weaponry will be deployed and the battlefield will be shaken up. The battle for the Island begins now.

Fortnite is the completely free multiplayer game where you and your friends collaborate to create your dream Fortnite world or battle to be the last one standing. Play both Battle Royale and Fortnite Creative for FREE. Download now and jump into the action.

This download also gives you a path to purchase the Save the World co-op PvE campaign during Fortnite’s Early Access season.