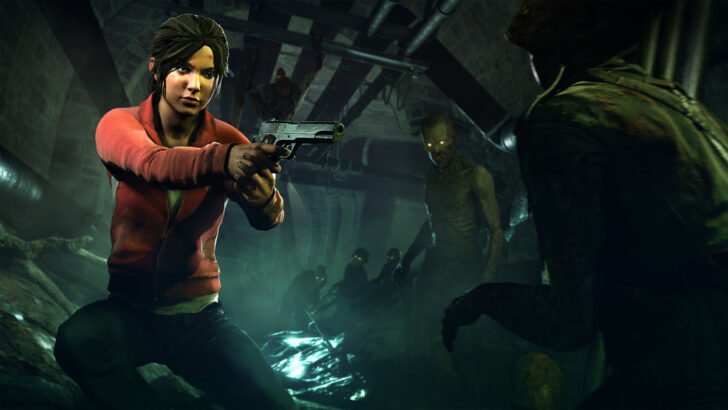 We hope that you’re enjoying Zombie Army 4. We continue to work hard on Season 3, so while that is still fresh in our minds, it seemed like a good time to give you another “behind the scenes” look at the next round of DLC.

Each season features a mix of free and paid content. This time up, and free to everyone — whether you bought the game or are playing with Xbox Game Pass — the cast of Left 4 Dead return to the Zombie Army universe! In the original Zombie Army Trilogy, the “Wrong Place, Wrong Time” comic revealed that the cast of Left 4 Dead were thrust backward through time by an occult relic, to find themselves face to face with an army of Nazi dead. It has been over ten years since a Left 4 Dead game was released, so it took a little bit of polishing work to up-res them to match modern levels of detail and rendering techniques! Our goal was to make them look like you remember them looking in Left 4 Dead, so if we got it right, it will look like we didn’t do anything at all.

Players that pick up the Season 3 Pass will also be able to continue the Return to Hell story campaign with a new mission, Abaddon Asylum. All missions this season experiment with different styles of sandbox play and exploration, to see what new gameplay flavors the Zombie Army formula will give up. This time we are giving players multiple parallel small objectives to complete in the open town of Abrunza, which encourage thorough exploration (and also reveals a few more Easter Eggs for fans of Sniper Elite 4). The mission ends with a much more extensive dungeon finale – a former monastery, which is now used as an asylum, where you will finally discover the mastermind behind the occult rituals.

It has been great fun building an iconic spooky location, as well as finally giving a voice to a figure who has been lurking in the shadows throughout the DLC seasons, and who set the events of the main campaign in motion. It took a few iterations to get the rhythm just right, and to make sure that the mission will be a fun challenge on repeated playthroughs.

The new content drop will also feature a range of cosmetic items – WW2 themed headgear, a WW1 themed costume for Josiah, and Zombie tank skins for weapons from the base game – and a new weapon, the MP.1940 SMG, with a solid rate of fire and low recoil, as well as a selection of occult Nazi cosmetics.

There is much more on the way for Season 3, including more unannounced freebies. We cannot wait to show you more and for you to play them!

☆☆☆☆☆
177
★★★★★
$49.99
Get it now
PC Game Pass
Xbox Game Pass
Hitler’s hordes are back for more in this spine-chilling shooter from the makers of Sniper Elite 4! Abominable occult enemies, epic weapons and a harrowing new campaign for 1-4 players await in 1940s Europe, as you fight to save humankind from undead Armageddon!

The resistance have defeated Zombie Hitler and cast him into Hell – but the dead rise once again with greater hunger than before! Continue the alternate history of Zombie Army Trilogy in huge new levels, and uncover a sinister plan that takes the Survivor Brigade across Italy and beyond!

Experience genre-defining ballistics, build the slayer that suits you and harness the power of fire, lightning and divine essence as you upgrade your guns to fight back against the dead. When the horde surrounds you, tear them apart with enhanced melee combat and flesh-rending takedown moves!