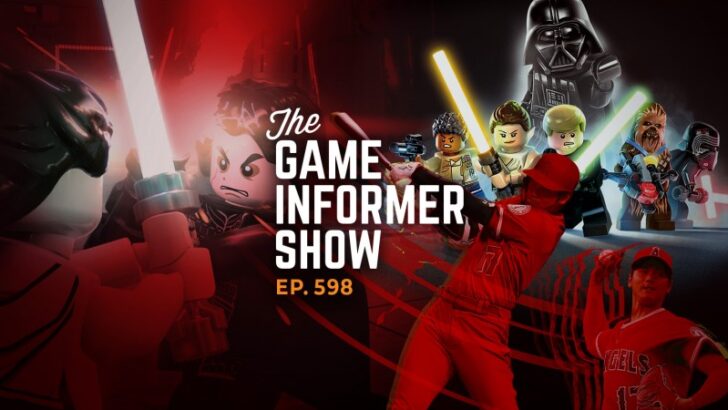 We’re back with another packed episode of The Game Informer Show. We’re discussing our hands-on time with LEGO Star Wars: The Skywalker Saga and MLB The Show 22, and our reactions to the Tomb Raider and Unreal Engine 5 news. We’re also chatting about our preview impressions of Two Point Campus, Cult of the Lamb, and rounding out the show with another fun round of Listener Questions.

The Game Informer Show is a weekly gaming podcast covering the latest video game news, industry topics, exclusive reveals, and reviews. Join hosts Alex Stadnik and Alex Van Aken every Thursday to chat about your favorite games – past and present – with Game Informer staff, developers, and special guests from all around the industry. Listen on Apple Podcasts, Spotify, or your favorite podcast app.

Check out the timestamps below to jump to a particular point in the discussion:

The Coalition Shows Off ‘The Cavern,’ An Unreal Engine 5 Cinematic Test Demo

Topic Of The Show:

It’s been a long time since we’ve seen developer TT Games and the studio’s patented style of LEGO zaniness. That all changes as LEGO Star Wars: The Skywalker Saga is set to launch this week, and we have good news for fans of the blocky version of a galaxy far, far away. The EIC Andrew Reiner is here to give you his impressions of the game, letting you know why this might be one of the best versions of the LEGO formula.

This may be the most extensive Playlist of the Alex and Alex era. Reiner continues to regale us with his time playing MLB The Show 2022 and lets us know about the exciting new features fans can expect from the long-running series. Then, we jump over to Kim and Van Aken as they’ve gotten to go hands-on with Two Point Campus, the new tycoon game that tasks players with building the best university they can. After that, Wes and Stadnik join a cult and profess their love for Cult of the Lamb after their exclusive demo session. After, we go back to Van Aken to discuss his time playing Midnight Ghost Hunt, telling us why it’s a great prop hunt multiplayer adventure. Finally, Kim saves the best for last and dives into her time playing Chrono Cross: The Radical Dreamers Edition and lets you all know if it’s worth returning to.

We have another great edition of Listener Questions where the GI community asks us about cooking in games and if there can be such a thing as too much game.

Read this week’s questions below and submit your own via the Official Game Informer Community Discord or by emailing us at Podcast@GameInformer.com:

Does anyone actually like cooking in games (monster hunter, botw, FF XV)? Seems like just a time sink and an extra step you need to do before every fight and it’s not actually a rare resource that you have to decide when to consume – Chalkfullof (Discord)
Can “too much game” hurt a game in your mind? I know everyone talks about games like GTA5, the Horizon series and Elden Ring and say “there so much game here, it’s like it never ends!” like it’s a great thing. And obviously getting the bang for your buck is great. But for me, this kind of commitment level just to beat it can be very overwhelming. I’ve just beaten Elden Ring (level 140 and 98 hours) and I feel like my last ten hours, if not more, were me going “ok I’m ready to wrap this up already.” Call it decision fatigue or call it too much of a good thing, but I was exhausted by the end and I think this is going to hurt my overall opinion of the game. So long story short – do you think that a game that’s arguably “too long” or has “too much content” can hurt it? Bob Buel (Discord

For more Game Informer podcasts, check out Video Gameography, our video game history podcast, All Things Nintendo, which deep dives into Nintendo’s library of games every week, and From Panel to Podcast, our latest show focusing on the world of comic books!