Meet the Weird and Wonderful Characters of Death’s Door 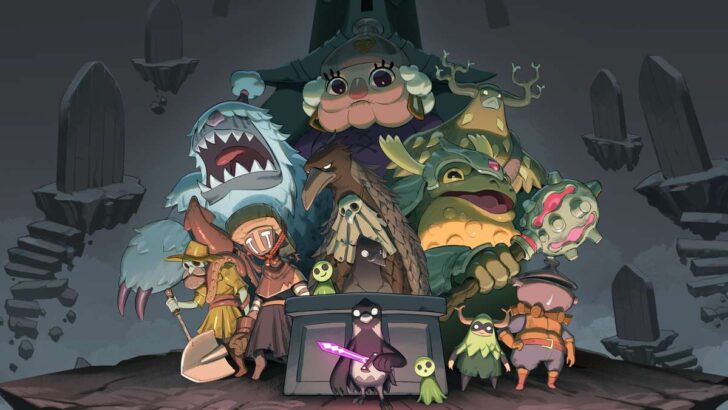 Death’s Door is available now for Xbox One and Xbox Series X|S!Players are thrust into a quirky and curious world where Crows are in charge of collecting the souls of the dead.Learn about some of the weird and wonderful personalities you’ll encounter early on in your journey.

A few months back we unveiled Death’s Door — available today for Xbox One and Xbox Series X|S — our dark and quirky action-adventure about a sword-wielding crow tasked with retrieving the souls of the dead. Since the announcement, the response has been incredible. We’ve had a lot of faith in our idea for this game since we started development almost four years ago, but it’s been very reassuring to see how enthusiastic everyone else is about being a bird with a sword and exploring this unusual world we’ve created!

We wanted to share a little more about the world you’ll be stepping into, and a handful of the characters you can expect to meet early on in your journey.

You play as a crow working for the enigmatic Reaping Commission, a bureaucratic organisation that has been enlisted by a mysterious creature known as the Lord of Doors. The Reaper’s linger in their main office headquarters known as the Hall of Doors, waiting for assignments to come in.

The Reapers in the commission are all Crows, enlisted to bring in the souls of the dead. They use a series of doors that can link any two points in space to travel around and complete their assignments. This technology passed to them by the Lords of Doors runs with soul energy, so keeping a steady supply of souls coming into the Commission is a must. You will of course be rewarded, with combat enhancing upgrades in return for your hard-earned souls.

These days, assignments are few and far between. Most life in the world has slowly faded away and there’s not many living things left to die, and so not many souls to be reaped. So, it’s the talk of the office when suddenly you are assigned a Giant Soul as your next mission! Souls act as a kind of currency in the crow’s economy – landing a Giant Soul would be a big pay day!

One of the first characters you will encounter as you set off on your adventure is Steadhone. He is the keeper of graves in the Lost Cemetery, a gentle old soul who has taken on a duty to make sure the deceased on the island get a proper funeral and burial.

Steadhone has an unusual problem that is certainly unique amongst the characters you will meet in this world… he can’t die, even by the feathery hands of a reaper. He feels his time in this world has run out and should have passed many moons ago but continues to live. You may learn more about his backstory if you dive deeper into the secrets in the world of Death’s Door, but in the meantime, you will certainly be giving him a sense of purpose as you send a lot of work his way (by reaping so many souls)!

Another character you will meet on your journey, he also has a curse to bear – though this one is much stranger; he has a pot for a head. The weird Witch of Urns has cursed him to forever be laden with a ceramic noggin. Why? Who knows? We do, we know – but you’ll have to play the game to find out.

Pothead is a simple fellow with simple desires, he doesn’t care for combat, but much prefers gardening, citing himself as being a keen horticulturist, having left lovely green pots with soil all over the place. These pots end up being your lifeline, allowing you to plant seeds you find in the world which grow into flowers that give your health back! Thanks, Pothead!

The Witch of Urns

The mysterious Witch who cursed your new friend Pothead resides inside a lavish mansion, surrounded by lush (yet slightly dangerous) stately gardens. Pots, urns, and ceramics litter every corner of her magnificent home, some of them even have a mind of their own.

You will get a chance to meet and talk to her several times on your journey and catch a glimpse into the mind of this rather nice and welcoming (albeit pot-obsessed) old lady. How could someone so hospitable have inflicted a curse on Pothead?

She is the first of the three Giant Souls you must reap to unleash the mysteries behind Death’s Door, and as you interact with her you will learn more about her motivations, and the impact she has had on the world around her.

This has just been a small taste of the peculiar world of Death’s Door and its inhabitants, whom we hope you will find endearing, intriguing and sometimes comical. You’ll encounter these characters early on in your journey, and many more weird and wonderful personalities await you as you progress.

It’s a setting and a cast we’ve grown attached to over the years, drawing inspiration from everything we loved growing up. It’s simultaneously dark, a bit absurd, and sometimes bleakly beautiful, and yet it all just makes sense – and we can’t wait to invite you in!

$16.99
Get it now
Reaping souls of the dead and punching a clock might get monotonous but it’s honest work for a Crow. The job gets lively when your assigned soul is stolen and you must track down a desperate thief to a realm untouched by death – where creatures grow far past their expiry and overflow with greed and power.

Related:
Next Week on Xbox: July 19 to 23
Prepare for Your Journey as Weird West Hits Xbox This Fall
Imagine Earth Available Now for Xbox One and Xbox Series X|S