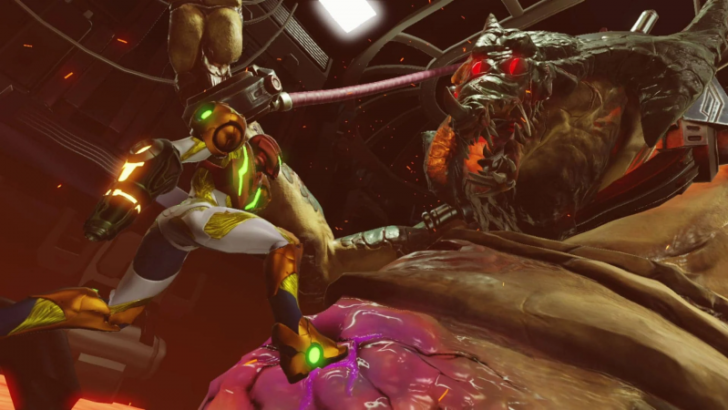 The Metroid series is largely defined by its haunting atmosphere and ominous tone. Inspired by the Alien film franchise and the works of H.R. Giger, Metroid has always been only a few steps removed from the horror genre. Metroid Dread inches the series even closer. The moment Samus sets foot on Planet ZDR, she becomes prey. Every deadly creature – and machine – in the world is hungry for Samus’ blood, and she is trapped miles below the planet’s surface, far from her ship. And, the only way out is through the barrel of her arm cannon. While Samus’ latest adventure delivers the classic exploration-based platforming/action we’ve come to expect, I never shook the all-encompassing anxiety that gives this adventure its name … and I loved every minute of it.

Metroid helped pioneer the idea of exploring large, non-linear spaces, so the world of ZDR and its disparate zones are essential to Metroid Dread. The quiet subterranean waterfalls of Artaria stand in stark contrast to the deadly lava flows of Cataria. Meanwhile, Burenia is home to a massive underground ocean teeming with carnivorous sealife. These environments feel alive; rainwater runs down the sides of an alien tram system, cool air drifts off the sides of frozen platforms, and exotic bugs gather around light sources only to scatter to the shadows when Samus approaches.

Exploring these foreign locales is continually rewarding thanks to essential upgrades scattered across Planet ZDR like a trail of bread crumbs. The handful of new abilities are incredibly empowering. I especially enjoyed Samus’ new storm missiles, which allow her to lock onto multiple targets before unleashing a volley of explosives. Unfortunately, most of Dread’s upgrades are old standbys that MercurySteam seemed obligated to include. I recognize that Metroid wouldn’t feel the same without the morph ball, which allows Samus to squeeze into narrow vents, but finding this upgrade several hours into a new Metroid game isn’t exciting. I wish Samus had started with more of her traditional abilities, leaving room for flashier upgrades. As it is, Metroid Dread feels like it’s occasionally retreading old ground, but this is a small disappointment in an otherwise great experience.

Thankfully, Dread does a few things to shake up the old formula, and one of the most significant new additions comes in the form of a new enemy type called E.M.M.I. These Extraplanetary Multiform Mobile Identifiers are powerful robots equipped with an arsenal of gadgets that could make a starship blush. E.M.M.I.s are so sturdy that Samus cannot beat them in a fair fight; she must evade them or hide, using a new cloaking device that grants temporary invisibility. These tense cat and mouse encounters left me sweating, and each time I encountered an E.M.M.I., I felt my stomach drop as I franticly ran for safety.

At set moments in the story, Samus temporarily upgrades her arm cannon, allowing you to turn the tables on the E.M.M.I. Even fully armed, these encounters require careful timing and quick footwork as one wrong move can leave you staring at a Game Over screen. Naturally, overcoming these challenges is a rewarding triumph. Likewise, Dread’s other boss encounters offer a sizeable challenge. For example, the giant three-eyed green reptile Kraid returns. This battle takes place in a confined space, and dodging the spikes from his belly then bounding up the sides of the wall to shoot him in the face was incredibly harrowing. Thankfully, each boss has a recognizable pattern, so these battles seem fair. Overcoming each combat mountain left me in a heart-pounding euphoric state.

Metroid Dread begins with Samus stranded at the bottom of Planet ZDR’s sprawling unground network. This is an inversion of the traditional opening that frequently has Samus descending into the heart of darkness, implying that MercurySteam (the developers of the 3DS Metroid: Samus Returns) is ready to rearrange the Metroid formula. Don’t be fooled; Metroid Dread follows Nintendo’s familiar blueprint for better or worse – but mostly for the better. This journey isn’t scary in the traditional sense. I never jumped out of my seat after rounding a corner and coming face-to-face with an alien monstrosity. Nevertheless, Dread’s atmosphere is powerful, and its imposing boss encounters are enough to ensure it earns its title. Despite a few hiccups in this timeworn pattern, Metroid Dread is a white knuckle thrill ride that you shouldn’t fear.

For more great Metroid-like games, read our list of the Top 10 Metroidvanias to play right now.

Graphics: Laser flashes, smoke plums, and other visual effects are a feast for the senses, but the action remains easy to read, so you never feel lost

Sound: Combat effects and boss music get the blood pumping, but the ambient and atmospheric soundtrack is more subdued than previous entries

Playability: The action is smooth, and a constant drip-feed of new abilities and upgrades helps you navigate the sprawling caverns of Planet ZDR

Entertainment: Intense combat and a series of challenging boss fights require a high level of play, but the thrill of victory is incredibly sweet