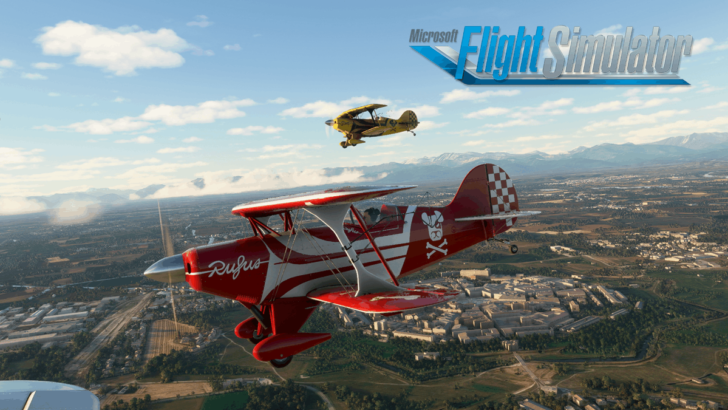 In a pivotal moment for the flight simmer community, today we are bringing Microsoft Flight Simulator to Xbox Series X|S giving aspiring pilots the chance to take flight for the first time on a console.

From light planes to wide-body jets, you’ll test your piloting skills against the challenges of real-time weather including accurate wind speed and direction, temperature, humidity, rain, and lightning – all in a dynamic and living world. With the power of satellite data from Bing Maps and cloud-based AI using Azure, you’ll travel the entire planet in amazing detail with over 37 thousand airports, 2 million cities, 1.5 billion buildings, real mountain ranges, roads, trees, rivers, animals, traffic, and more. Simmers can expect the same level of depth as the PC version, with the most authentic and realistic flight simulator we have ever created and available to the widest audience ever.

Discovery Flights: Newcomers can easily enter the world of Microsoft Flight Simulator and experience some of the most impressive wonders of our planet, including awe-inspiring locations like the Great Pyramid of Giza and Mount Everest, or vibrant cities like Naples and Rio de Janeiro. Start in the air and off you go.

World Exploration Improvements: Many users love to explore the planet in Microsoft Flight Simulator, and we’ve further enhanced that experience. The world map now features satellite imagery, map labels, and main Point of Interest (POI) names to make exploring the world (and even finding your house) as easy as possible. We extended this capability into the flight experience itself and users can now activate the POI labels during a flight, so they can get a sense for the spatial relationships between cities, mountains, and other landmarks.

Flight Training: We significantly improved our flight training to ensure a smoother learning curve and make them more snack-sized and by adding a new performance evaluation system. We now have 22 training flights that teach users the fundamentals of flying starting with basic handling, to landing and takeoff, VFR navigation and learning how to fly an airliner like the Airbus 320neo. We also added more contextual voiceovers to help explain elements and provide feedback.

Flight Assistance: We are introducing an extremely useful new tool called the Flight Assistant that provides AI help during flight:

You can select nearby POIs or airports and set them as your destination to get direction.You can use it to let the AI auto land your plane.You can use it for auto-trimming and anti-stall.

Land Anywhere: In most flight simulators, take off and landing at an airport can be complex and intimidating for newcomers. 71% of our planet is water, so we added water landing options. We revamped several of our planes and incorporated optional floaters, skis and a “large tires” feature so you can land almost anywhere.

Microsoft Flight Simulator on Xbox Series X|S is the most accessible entry to date with the addition of Screen Narrator and new features such as Discovery Flights, all new scored training flights, enhanced landing gear and more so new pilots can jump right into experiencing the thrill of flight!

Launching Microsoft Flight Simulator on PC last year was only the beginning of our journey to make the best simulation possible. As we continue adding to the experience with free World Updates (Japan, US, France, Benelux, UK & Ireland and the Nordics so far with many more to come), free simulation updates, themed DLC bundles, and true-to-life aircraft, Xbox Series X|S simmers will enjoy these updates on console as well. The sky is calling!

For the latest information on Microsoft Flight Simulator, stay tuned to @MSFSOfficial on Twitter.