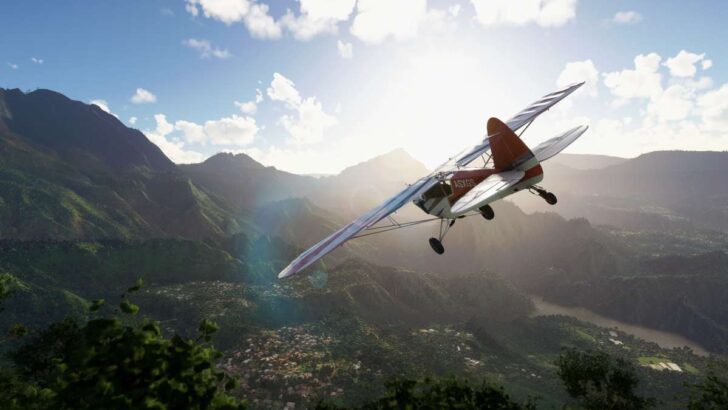 We grab our Xbox Wireless Controller and head to the skies on Xbox Series X|S.An enhanced Flight Training feature and majestic Discovery Flights highlight some of the new features available.Microsoft Flight Simulator on Xbox Series X|S will be available with Xbox Game Pass starting on July 27.

I just flew an Airbus A320 from my couch, and I can’t believe I just typed that. Having logged some time with the PC version of Microsoft Flight Simulator over the past year and going hands-on during its lead up to launch, I’ll confess that I remained cautiously optimistic about how well the simulator experience would translate to a console.

Well, as this avid fan of both aircraft and flight simulators, I’m happy to report that Microsoft Flight Simulator has absolutely nailed the landing on Xbox Series X|S, giving gamers a robust, exhilarating, and worthwhile experience that can’t be found on any other console today.

Having spent a solid day with the Xbox Series X|S version of Microsoft Flight Simulator – specifically on my personal Xbox Series X – I’ve flown over black bears in Yosemite National Park, cruised over the Ancient Pyramids, buzzed Seattle’s Space Needle, and even visited the Mauna Kea Observatories on the island of Hawai’i.

These quick trips around the globe are thanks to the new Discovery Flights feature that drops you over curated points of interest in ideal weather conditions, letting you easily fly over iconic landmarks, monuments, and other areas of splendor. It basically turns Microsoft Flight Simulator into a killer sightseeing tour operation. You can also create manual waypoints using the robust World Map (now with real map telemetry data) to design a flight path with a few easy clicks. Or you could just drop a pin anywhere in the world, making it that much easier for you to fly over your house.

Going Back to (Flight) School

Flight Training with the Cessna 152 has received a little bit of an overhaul, with many of the flight lessons now assigning points on your performance, giving more detailed feedback on how well you’ve executed your latest flying lesson, and being assigned an A, B, or C grade. I found this extremely useful, especially transitioning from a flight stick to the Xbox Wireless Controller, as I had to sort of relearn how to fly.

Speaking of the Xbox Wireless Controller, I found that it translates well to a console flying experience. While in cockpit, it feels like you’re playing a flying first-person shooter (first-person flyer?): the left analog stick controls the elevator and ailerons while the right analog stick controls your pilot’s head. The rest of the default mapping makes a lot of sense, with the triggers managing your rudder, the surface buttons managing your throttle and brakes, the d-pad controlling the landing gears and flaps, and the bumpers acting as modifiers for some of the more complex tasks (trim, camera position, etc.).

It takes a little bit of practice, for sure, especially coming from a flight stick/keyboard and mouse setup if you played Microsoft Flight Simulator on PC. But by the time you complete most of the Flight Training you should feel right at home with an Xbox Wireless Controller in your hands as you take to the skies.

Too Much Good Stuff

Console pilots jumping into Microsoft Flight Simulator for the first time will be treated to a massive amount of readily available content on day one. After a year full of World Updates with enhanced 3D photogrammetry on real world locations like Japan, the Nordics, and the United Kingdom, along with some free and paid DLC (some that remains PC only for now), there’s almost so much good stuff that it’s hard to know where to start.

Beyond that, you also have all the existing Activities returning to deliver some great pre-planned scenarios for you to try. Landing Challenges are not for the faint of heart, delivering an incredible challenge that will cut your piloting teeth while asking yourself, “Did they seriously build an airport there?!” I still can’t believe I managed to land an A320 at Paro International Airport, albeit with a C grade. And yep, you read that right. You get graded on the Landing Challenges now too, putting your score on a leaderboard so you see how well you stack up against your friends.

There’s also my personal favorite, Bush Trips. These are some of the most picturesque flight paths you can take in Microsoft Flight Simulator that are a both a true test of your piloting and terrain reading ability where you must rely only on VFR (Visual Flight Rules) to make your way from point A to B – so following roads, rivers, and other landmarks to keep on track. There are assists in place should you find yourself off track, but I can imagine these will be some of the hardest achievements to earn in the game (I’ll make my way all the way to Mariposa without any help… one day).

It’s still settling in for me how well Microsoft Flight Simulator has translated to a console experience on Xbox Series X|S. It’s feels really close to a 1:1 experience that can be found on a modest gaming PC, albeit with an Xbox Wireless Controller in hand instead of a flight stick – and if you’re looking for a console flight stick, I can help you with that here.

It’s going to be great re-experiencing this simulator all over again on console, on a large 4K screen and from the comfort of my sofa. Not to mention Xbox Series X is considerably more powerful than the gaming laptop I previously played Microsoft Flight Simulator on. But I think I’m most excited to see all the future console pilots – maybe for the first time — experience one of my favorite genres in gaming. It’s going to be great seeing so many screenshots, videos, and more in the coming weeks from the Xbox community as they take to the skies with this can’t-miss experience.

☆☆☆☆☆
368
★★★★★
$59.99
Pre-order
Microsoft Flight Simulator is the next generation of one of the most beloved simulation franchises. From light planes to wide-body jets, fly highly detailed and stunning aircraft in an incredibly realistic world. Create your flight plan and fly anywhere on the planet. Enjoy flying day or night and face realistic, challenging weather conditions.

Related:
Next Week on Xbox: July 26 to 30
Take to the Skies with These Official Microsoft Flight Sim Accessories
Cris Tales Available Now for Xbox One and Xbox Series X|S with Xbox Game Pass