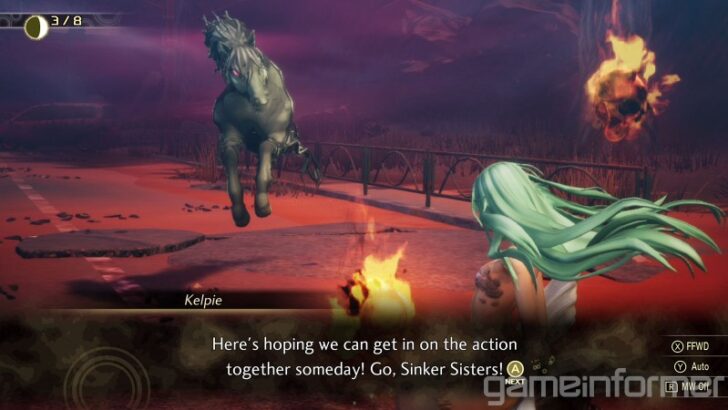 The Shin Megami Tensei series has been an RPG standby since the early ’90s, captivating gamers with its dark storylines, philosophical dilemmas, and recruitment mechanics. Now a new generation of gamers can see what the cult series is all about thanks to a new mainline entry hitting on November 12 for Nintendo Switch. To show you what’s in store, we’d provided exclusive looks at Shin Megami Tensei V in the lead-up to its launch. Today, we have some more screenshots, which focus on negotiation, demon fusion, and the skill and stat-building features to show off. They also showcase some more intriguing characters you’ll meet on your journey.

Let’s dive right into the gameplay. Just like in previous games, you turn enemy demons into allies. Every demon has its own quirks and personality types, but Atlus says to also expect some new behavioral patterns and moon phases, particularly new and full moons, to affect their temperaments. The screenshots below also showcase the different types of demon fusion: special, reverse, elemental, and create your own demon. Visiting Sophia in the World of Shadows allows you to create more powerful demons, whether you’re fusing 2-4 demons together for special fusions, or using elemental fusions to upgrade or downgrade to another demon within the same family.

In addition, you have some extra ways to add skills and improve the stats of your party. Essences – spiritual cores imbued with the powers of demons – can be found as you explore the parallel world of Da’at and interact with the demons there. Fusing these with the protagonist lets you customize his skills and affinities to your liking, but you can also use them on your demon party members to adjust their powers.

While exploring Da’at, you will also come across Glory, a manifestation of divine dignity. When you visit the World of Shadows, Glory can be spent to obtain Miracles, which are powerful abilities that alter the laws of nature. According to Atlus, they provide a variety of skills that can assist you in battle, negotiations, demon fusions, skill potentials, and even stat-building. You can get a look at all of these gameplay features in the gallery below.

Lastly, we have several characters to spotlight. Our gallery begins with the mysterious Shohei Yakumo. This man will be a thorn in the protagonist’s side as he advances through Da’at. We don’t know his true motives or allegiance, but he calls himself an exterminator of demons and parters with Nuwa, a demon herself. Speaking of Nuwa, she’s up next in our gallery. This goddess that appears in Chinese mythology has worked with Yakumo since he was young, and she confronts the protagonist without warning or mercy. Archangel Abdiel gets our next spotlight, as she’s in command of Bethel’s main branch. Atlus calls her stern, uncompromising, and fervently devoted to God. She won’t take kindly to anyone standing in the way of Bethel’s plans and will defend God’s order at all costs.

Before we go, how about seeing one of the 200 demons you’ll meet during your adventure next? Take a look at beast Loup-garou. Atlus says to expect the classics, but several new demons will also appear, designed by Masayuki Doi, who has worked with Atlus since Persona 2: Innocent Sin. The last character in this gallery is Sophia, who you visit in the World of Shadows when you want to participate in demon fusion or spend Glory.

And, that covers our latest look at Shin Megami Tensei V, which launches November 12 on Nintendo Switch. We’ll keep you posted on new details for the game as we get them. What do you think so far?