New Games with Gold for September 2021 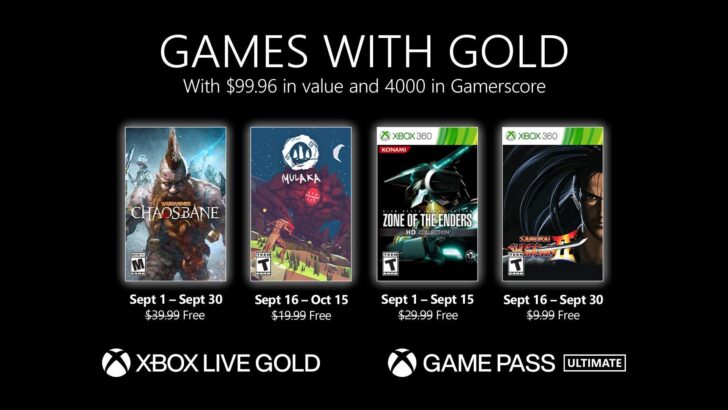 The September Games with Gold lineup is here! On Xbox One and Xbox Series X|S, battle the Chaos Gods and their horde of bestiaries in Warhammer: Chaosbane, and embark on an epic quest in Mulaka. For our classic lineup via Backward Compatibility, fight among the stars with the Zone of the Enders HD Collection, and clash blades in the classic fighter Samurai Shodown II.

Xbox Live Gold members will have exclusive access to these games for a limited time as part of Games with Gold. So will Xbox Game Pass Ultimate members, who receive all the fantastic benefits of Gold plus access to over 100 high-quality games with Xbox Game Pass.

Warhammer: Chaosbane
In a world ravaged by war and dominated by magic, you are the last hope for the Empire of Man. Choose your hero among four different character classes and prepare for legendary battles with up to four friends against the all-powerful Chaos hordes in this action role-playing game.

Mulaka
In this action-adventure title based on the rich indigenous culture of the Tarahumara people, fight back against a strange foulness that is corrupting their land. As the local shaman, Sukurúame, draw upon the power of the demigods, solve puzzles, and fight hand-to-hand in environments inspired by real Sierra locations.

Zone of the Enders HD Collection
From Hideo Kojima, the creator of the Metal Gear series, comes a space epic like no other. Pilot the Orbital Frame, Jehuty, and help the Space Force defeat the Bahram forces once and for all. This title contains both Zone of the Enders and Zone of the Enders: The 2nd Runner, all in one collection.

Samurai Shodown II
Step onto the grand stage to test your skills in intense sword fights using the Rage System and Weapon Breaking Attack features. Play 15 of your favorite characters in this renowned weapon-wielding fighting game, against competition that is as sharp as ever.

Read more about our Games with Gold program here and stay tuned to Xbox Wire for all the latest news on Xbox. Like we said before, if you’re an Xbox Game Pass Ultimate member, you get all the benefits of Xbox Live Gold, over 100 high-quality games you can play on console, PC, and Android devices with cloud gaming (Beta, where available), and access to EA Play at no extra cost. New games are added all the time, so you’re never without something new to try when you’re looking to find your next favorite game. If you’re new, or if you’re an existing Xbox Live Gold and Xbox Game Pass for Console member, join or upgrade today for just $1.