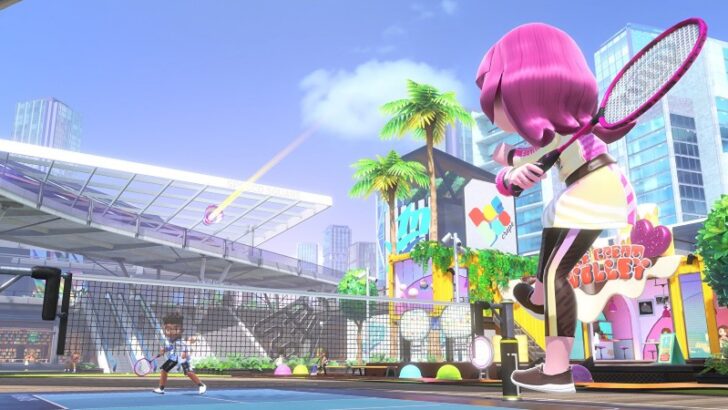 Wii Sports solidified the power of motion-control gameplay and catapulted Nintendo’s seventh-generation home console to immediate superstardom (it’s no wonder the cartoony sports simulator cracked our Top 25 Wii Games). And while the Resort follow-up garnered critical and commercial success, the magic of its predecessor remained unmatched. Fast-forward 16 years and Switch Sports’ launch is finally on the horizon. I tried my hand at the activities (old and new) scattered throughout Spocco Square, and here are my thoughts on each.

Look, if it ain’t broke, don’t fix it. I didn’t notice any substantial differences between Switch and Wii Sports’ Bowling, and, in hindsight, that was probably a sound decision. Bowling was already a close-to-perfect activity. Rolling the ball with the Joy-Con felt as natural and simplistic as can be. You still need to aim correctly, but those adjustments are appropriately made before stroking. What did pique my interest was the promise of 16-player elimination PvP matches that function like battle royales. That’s certain to spice up Bowling’s cathartic loop.

Going in, I was most skeptical of Soccer. Recent Switch Sports trailers showcased the leg strap accessory, an ambitious feature that monitors leg movements so that kicks feel intuitive. While it took me some time to get acclimated to and won’t be wholly implemented on launch day (an update is slated for the Summer), the leg-strapped Joy-Con was surprisingly refreshing. More stationary Soccer modes like the “shoot-out” activity are ideal for kicking the ball in quick succession without tiring out. But when the entire Soccer field is made available, things will likely get more hectic and demanding. For my hands-on experience, I used two Joy-Cons to kick the ball in various directions and altitudes. The diving header shot type always made me smile, as my Sportmate thew their entire body, head-first, at the ball. The FIFA-inspired celebrations after a wacky score were a nice touch too.

Tennis, like Bowling, was a Wii Sports phenomenon. Tight controls paired with gleefully wonky Mii animations helped drop the stakes and up the fun for casual Nintendo fans. That’s not to say that there wasn’t room for skill-based play. Switch Sports’ Tennis is more of the same on a mechanical level, but color-coded cues and minor but significant tweaks to the game’s physics add a strategic quality. For instance, balls with a purple trail (Supercharged) are powerful and speedy, forcing players to hone their response time for equally devastating returns or weakly pop the incoming projectile into the sky. Matches feel a bit more intense now that the direction you swing the Joy-Con determines the ball’s path – sorry, you can’t just fling the racket around willy-nilly for optimal results. I loved Wii Tennis back in the day and am happy to announce that Switch Tennis is just as enjoyable.

Volleyball is one of Switch Sports’ most involved activities. Serves, bumps, sets, spikes, and blocks require different but uncomplicated movements. I enjoyed lifting the Joy-Con up to watch my avatar leap and then swiping down at the right time to activate a supercharged spike. Similarly, blocks require you to predict your opponent’s movements and meet mid-air at the net. The nature of these different actions prioritizes teamwork. One player will always have to set up a big play by putting their hands above their head, so communication is key to success. Unlike Tennis, there’s no “carrying” in Volleyball, and players looking to dive in with family/friends will appreciate that.

Like Swordplay in Resort and Boxing in the original game, Chambara is the latest iteration of the series’ perennial “workout” sport. Get ready to sweat, as slashing the various sword types requires more than a simple flick of the risk. You’ll twist and turn your body, Joy-Con gripped firmly, to land blows. When you find yourself in trouble of being knocked out, hold the ZR button while positioning your weapon of choice vertically, horizontally, and diagonally to guard against attacks. I only got the chance to play with the default armament, but twin swords and charge swords introduce a newfound level of freneticism and brawn to basic slices. Chambara rewards players that guard and thrash with intention, so if you’re planning to climb the leaderboards later this month, make sure your decisions are thought-out and deliberate, like any good dueler.

Badminton might seem like a miniaturized, 1v1 version of Tennis, albeit with a gravity-defying shuttlecock. However, this welcome newcomer to the Nintendo Sports catalog forced me to hyper-fixate on patience and timing. Super-charged hits are still a threat. Yet, your combinations of shots (backhand, forehand, drop shot, etc.) might decide whether or not your Sportsmate or Mii can keep up with the split-second action or collapse on the court from exhaustion. Badminton is my favorite sport of the six – a Nintendo rep and I played a single match for what felt like 20 minutes! That’s because rallies are regular occurrences in Badminton, so bouts feel particularly competitive and exhilarating. I can’t wait to see how this promising new game mode evolves in ranked playlists.

Nintendo sports are back in rotation with the same cutesy, vibrant aesthetic you remember from 2006. The new Spocco Square venue sparkles beneath a tropical sun, palm trees standing proudly amid the six sporting arenas. The responsive Joy-Cons bring the various extravaganzas to life, and Sportsmate/Mii customization will be a great incentive for players to grind out their favorite playlists solo or online. I, for one, left the preview event impressed with what I sampled. Golf is scheduled for the fall, and a Baseball announcement – please announce baseball, Nintendo – would be the sweet cherry on top. In any case, Nintendo Switch Sports might just be the triumphant reemergence of Wii Sports when it drops on April 29.