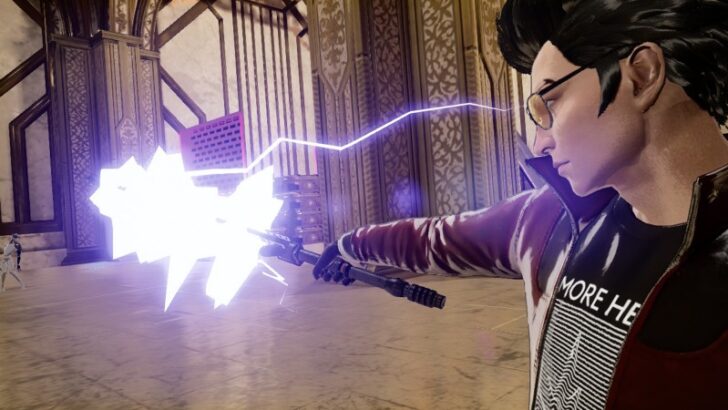 Suda 51 and Grasshopper Manufacture’s nerdy assassin Travis Touchdown returns in the first numbered No More Heroes in over a decade. Many of the series’ telltale features return, including stylish trimmings, Beam Katana battles, and completing mundane yard work to earn a buck. No More Heroes 3 is best when the action is heavy, and the absurdity in cutscenes is full-bore, but the open world padding between each thrilling melee arena or assassin duel hamstrings the experience.

No More Heroes 3 bleeds style, is full of fun references, and takes incredible pleasure in being weird and ostentatious. In the opening hour, the landscape of the cast changes in dramatic and violent ways. Also, I counted no less than four title cards in that timespan, one of which lingered onscreen longer than any in memory. I’m still chuckling about parts of this game’s presentation days later. Suda and his team at Grasshopper effortlessly plaster sound effects and visuals across the UI, menus, and cutscenes that bring countless retro games to mind. Few, if any, of the references feels corny; they’re all part of the game’s DNA.

Our hero, Travis Touchdown, has found himself fighting to become the top-ranked assassin on multiple occasions. After settling into his position at the peak of the global rankings, a gang of aliens arrive on Earth to challenge the otaku warrior. This group is led by a colorful leader and galactic prince named Jess Baptiste VI, better known as FU. A much younger and fluffier FU and his human companion Damon are introduced in the game’s opening moments in a beautifully animated Ghibli-inspired take on ET: The Extra-Terrestrial. FU was once an adorable pile of fluff looking to return home, but 20 years have passed since his last visit to Earth. Now, he’s transformed into a surly and violent kingpin, ready to kill at a moment’s notice.

Boss battles are once again the heart and soul of the No More Heroes experience, and big setpiece battles against FU’s generals cap each episode. Players find themselves fighting among the stars in the depths of space or competing in a deadly game of musical chairs. Some encounters feature surprise moments and battles I won’t spoil, but I found it helpful to have previous series knowledge to get the most of it. Each climatic battle is unique and worth slogging through your mission tasks to complete. Even the final encounter was a blast, which breaks the fourth wall in ways that plastered a grin on my face through the credits.

No More Heroes 3 plays like TV episodes bookended with opening credits introducing the characters and features an ending credit animation reminiscent of ‘80s anime. I felt like I was seeing the world through Travis’ otaku mind, and the devs pull it off wonderfully. Episodes open with Travis hanging out with friends and discussing obscure topics like the production styles used throughout the career of director Takashi Miike. From there, you play with your talking cat Jeanne, pick out new clothes, or head to the basement to buy new skill points to power Travis up.

A relic of previous No More Heroes, Travis must complete a series of Designated Matches before each ranked assassin battle. These alternate between combat arenas against various aliens and mech conflicts in space against massive cosmic threats. Battles are quick and fun, where you’re presented with different enemies to fight with fantastic, diverse alien designs, each requiring a unique strategy. The arsenal at your disposal is limited but adequate. Travis can slash with light or heavy attacks using his trusty beam katana, and he uses a bevy of wrestling suplexes and throws when enemies are stunned. Early in the game, he also acquires Death powers, which allow him to slow time, do AOE damage, and toss aliens back, creating more breathing room. I never felt overwhelmed or underprepared when going into battle, but I continually hoped for more complexity and a greater sense of becoming stronger.

Once meeting the Designated Match requirements, Travis must cough up the registration fee for the United Assassins Association to sanction the match. Our mighty assassin earns money around town through Volunteer Missions, taking odd jobs to mow lawns or protect the oceanfront from invading kaiju alligators. These jobs aren’t as engaging as the combat missions, but they also aren’t a complete bore. Lawn mowing is a surprisingly strategic activity, challenging you to continually boost your engine without overloading. It features its own silliness, letting you be a showoff and ham it up while turning the machine to line up your next path to cut.

While I get this battle and chore loop is tied deeply to the series’ early installments, too much time is spent meandering between objectives in the dull, barren open world. Each chapter sends you to territories surrounding Travis’s home of Santa Destroy, and each one is devoid of interesting sights or activities in the world proper. Call of Battle is a bombed-out battlefield with a grainy sepia filter slapped on the screen. It’s the closest an environment comes to being attractive, though it is still empty and full of frustrating invisible walls. Scattered collectibles entice players to explore, but I felt minimal incentive to look around the eyesore of a world. Performance takes a massive hit in the open, bringing framerates down to near-single digits, which clashes with the more stable battle sequences.

While the journey to kill FU and his cohorts takes Travis Touchdown to some wild places, the narrative needle doesn’t move much in the end. There’s no natural arc for Travis, and the story merely serves as a setup for future series plans. Most character-building centers on FU and how he treats individual members of his team of space conquerors to their last meal before sending them to face Travis. Even these sequences are short and don’t matter much to the overall tale. I wish something more meaningful took place over the 15 hours I spent in Travis’ shoes.

My time with No More Heroes 3 jumped between the short highs from entertaining bosses and cutscenes to long, ugly stretches in the world. Much of the design is dated, and I wanted to drop it after a few bosses to avoid the mundanity, but I’m happy I saw it to completion. There are many fun moments, and I love how unafraid it is to be strange or referential. Those who are already invested in the tale of Travis Touchdown should be right at home in this new No More Heroes. Still, I’d insist newcomers try out previous entries before diving into this Garden of Insanity.

Summary: Travis Touchdown’s return slays in action and presentation, while the world he inhabits is dead on arrival.

Graphics: Battles are beautiful and fluid, but the open world is flat and drab with framerate woes. No More Heroes 3 suffers from performance issues, but is full of fun game references and stylish scenes

Sound: Retro game chimes and tones liven up menus and combat, while touches like the theme songs during the anime-like episodic credit sequences are a nice touch as well

Playability: Battles are easy to mash through, but those who want to be more meticulous won’t be disappointed. However, some side activities are frustrating and ask for more precision than the game allows

Entertainment: No More Heroes cutscenes and boss battles are worth the time investment alone. Its highs greatly outweigh the lows and provide plenty of fun for those who stick it out until the end