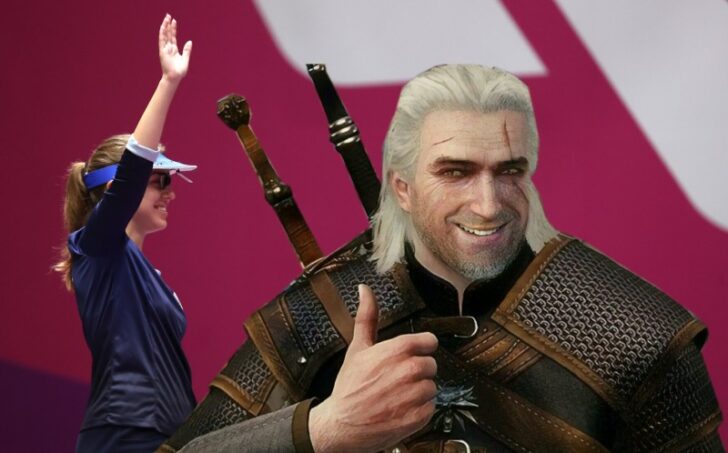 The Tokyo Olympics are in full swing and gold medalist Vitalina Batsarashkina is once again wearing her love of The Witcher on her proverbial sleeve. Unlike last time, however, this time she’s wearing that love around her neck.

CD Projekt Red’s Radek Grabowki spotted the Witcher medallion that Batsarashkina was sporting during this year’s event noting that this isn’t the first time she’s let her fandom love shine. The first time, at least that we know of, was back in 2016. Given the several Witcher shows in the works and how expansive the third game was, it’s easy to see how she’s kept that love going and it’s awesome to see her bring in a little more gaming to the … well, the games.

Years-long commitment to the Witcher universe. I’m loving it! 👏 https://t.co/EaFGX6RUgg

Others were quick to note other ways she showed her Witcher passion, including on her eyewear that she sported during the Rio games in 2016:

On her shooting eyewear as well pic.twitter.com/J7j9GBhieM

Batsarashkina not only represents the Witcher fandom unofficially, she’s also at the Olympic games representing Russia. She is a part of the female shooting team where she competed this past weekend in the 10m air pistol competition. For those that may need a little reminder, the medalion she can be seen wearing is the same one that Geralt of Rivia dons in the games by the Polish studio.

Needless to say, she did the RPG community proud because she took home the Gold. Who knows, maybe the studio will find a neat little way to pay homage to her love of the series in the next Witcher game? Stranger things have happened.