One Special Rematch: Rare and Playground Games Face Off on the Football Pitch for Charity 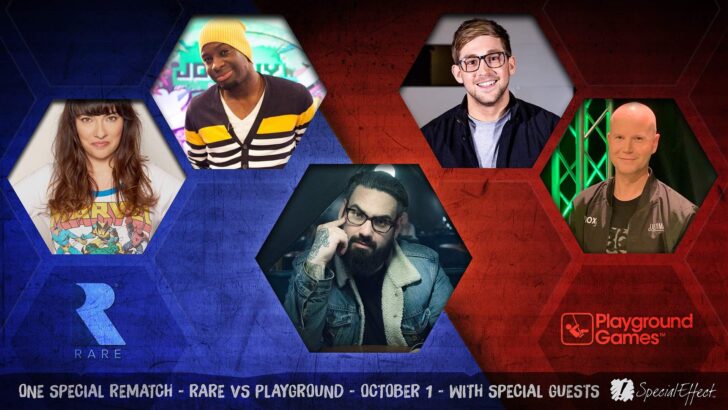 Teams from Rare and Playground Games are set to play One Special Rematch on October 1, battling on the pitch to be Xbox Game Studios’ most skilled studio at soccer – all in the name of charity! This football-based showdown arrives in real life after being played virtually last December, where the feisty FIFA match – lovingly dubbed El Gamepassico – raised £4,652 for UK-based charity SpecialEffect.

Last time out, Playground Games’ squad bested Rare’s team in a thrilling end-to-end digital ding-dong. So while camaraderie between the two Midlands-based teams is high, there are some scores to settle on the field! As with last time, the teams won’t just be playing for pride: they’ll be clashing to raise money for charity. On SpecialEffect’s One Special Day, October 1, these two teams will once again kick off to support this charity’s fantastic fundraising efforts.

This time, however, the studio teams will have some special support: Xbox’s Graeme Boyd (AKA AceyBongos) will be taking to the field for Playground Games, and a friendly face from Xbox On may be donning his boots and Rare colours for the clash. The match will be broadcast live from 6:00pm BST on twitch.tv/xbox and commentated on by Gav Murphy, who will be joined by Inel Tomlinson, Steffan Powell and Claire Lim. The location will be suitably epic too, with the game taking place at St George’s Park – training ground of the England National Team, Xbox’s latest Official Partner.

Rare’s Studio Head Craig Duncan said of the occasion: “It’s always fun for the Rare team to pull on our footy boots against our good friends at Playground Games, especially when it’s to raise money for the incredible charity SpecialEffect. While they got the better of us in FIFA last time, playing for real under the floodlights is a whole different ball game!”

Playground Games’ Game Director Ralph Fulton added: “For many, Playground versus Rare is the World’s Greatest Derby. We’re proud to have beaten them in our FIFA challenge last year, but facing them on a real pitch in front of the fans is going to be even more special, especially as we’re doing it to support SpecialEffect.”

SpecialEffect is a charity that focuses on helping people with physical disabilities to play video games. For many people, games are a vital form of recreation and games like Sea of Thieves and Forza Horizon 4 have a particular role to play in connecting gamers with additional needs. SpecialEffect uses innovative technology to make gaming accessible to all. Solutions are tailored to each individual, taking into account their physical limitations and creating custom input devices, from modified controllers to eye control gadgets, to let them play with their friends and family.

As Team Xbox, we couldn’t be prouder to support SpecialEffect’s mission to level the playing field for all gamers with disabilities. Make sure you tune in on October 1 for fun, fundraising, and a healthy dose of competition between the two studios – and stay tuned to Rare and Playground Games’ social media channels for more news and information on the match!