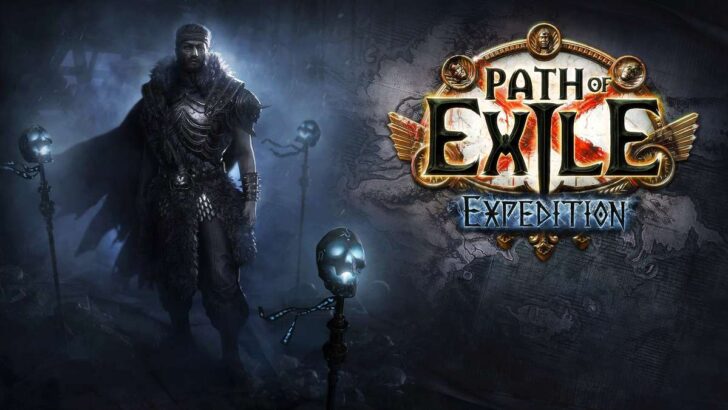 Slaying hordes of the undead? Check. Controlling your risk and reward? Check. New merchants to trade with? Check. New ways to build your character? Check. Path of Exile: Expedition, has everything a good ARPG expansion needs: Compelling items, visceral combat, and unrepentant darkness.

A group of Kalguuran traders have arrived in Wraeclast, following the footsteps of their ancestors who visited long ago but never returned. They seek to recover the artifacts lost to the past and have enlisted your help in facing the dangers lurking below. You must strategically place a series of explosives across their marked Expedition sites and then detonate them. These explosions unearth the lost Kalguur. If you can slay this undead horde, you’ll be able to recover their artifacts and turn them in to the traders in exchange for their wares.

Each of the travelling Kalguur offer different styles of trade, influenced by their personalities. Gwennen, the Gambler, doesn’t believe in luck and that fortune only comes to those who believe hard enough. She offers items whose properties are not shown until after the purchase has been made. You might get something worth a lot or very little. Tujen, the Haggler is willing to negotiate his prices but be careful not to offend him by offering too little. Rog, the Dealer just wants to make a trade and will keep trying to upsell you by offering to upgrade the item you have bought. Dannig, their leader, takes artifacts of all types and exchanges them for other types to help facilitate trades with his expedition crew.

As always, we’ve created new options for players to build their characters around. There are exciting new base types and Unique items, themed around the Kalguur. But, the core of creating new playstyles is undoubtedly through skill gems. In this expansion, we really wanted to shake up Path of Exile’s metagame by introducing as many new skills as possible that appeal to a wide variety of play styles. As such, we’ve created 19 new skill and support gems, each themed one of our Ascendancy Classes.

These skills alone would likely be enough to change the outlook of Path of Exile‘s best gameplay strategies, however, we’re taking it a step further by making some significant changes to the game’s balance. Not only are we fundamentally reworking the Flask System, but we’re also making significant changes to various systems to make Path of Exile the challenging game that it once was.

If you haven’t tried Path of Exile yet, or if it’s maybe been a while, this is the perfect time to jump back in. Not only is there a fresh economy to compete in at league launch, but players are all equally trying to figure out the new best strategies and ways to play. As the community figures out this complex new landscape, you can be right there along with them.

We can’t wait to see what sort of character builds Path of Exile fans create after this expansion. It’s always a pleasant surprise to see just how far people can push the limit of Path of Exile‘s versatile gameplay. We hope to see you there!

☆☆☆☆☆
315
★★★★★
Get it now
Xbox One X Enhanced
Earn devastating skills and valuable items as you fight your way through the dark continent of Wraeclast. With unrivaled character customization, Path of Exile is an award-winning online Action RPG created by hardcore gamers, for hardcore gamers.