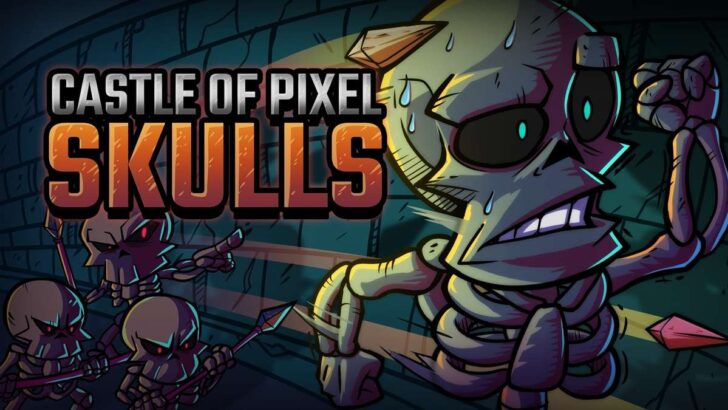 Castle of Pixel Skulls is a fun retro-styled platformer filled with fun and crazy hurdles.Play challenging levels in a race against time in order to escape; will you have what it takes to survive?Castle of Pixel Skills is available now for Xbox One and Xbox Series X|S.

Castle of Pixel Skulls is a fast-paced and challenging platform game. The objective of each level is easy: Reach the exit door avoiding all enemies, traps and obstacles. The mechanics are very simple with only one action at your disposal, jumping. This simplicity does not mean that it is easy, on the contrary, it is a very demanding game that requires all your expertise to complete each level. Despite all of this, the correct use and position of the checkpoints guarantees that the game doesn’t become a frustrating experience.

Castle of Pixel Skulls is one of the first games I developed, and I think it is one of the most fun so far. In this new version many things have been changed: the gameplay has been improved, the difficulty curve has been smoothed, the graphics have been modified to make it visually more attractive and more levels have been added (they have doubled in number, in fact), among many other things. All of this thanks to the advice of the guys at 2Awesome Studio, whose experience and advice have allowed Castle of Pixel Skulls to improve significantly.

Now, a little bit about me: I am Josep Monzonís, an independent video game developer. I started creating games 11 years ago and my passion is playing and creating fun games. I have created many games during these years, but Castle of Pixel Skulls is the one I feel the most proud of. I love watching people play it and seeing their satisfaction when they complete a hard level. I like to be part of every process of development: programming, art, design, etc. To me, game development is a work of craftsmanship, and I think that being deeply involved in all aspects of development gives the final product a very personal finish.

I met the guys at 2Awesome Studio at a developer event and we established a relationship that has allowed me to fulfill my dream of being able to release several of my games on consoles. I am really comfortable working with the whole team because of their closeness and professionalism.

I can’t wait to see people enjoy a game that has been developed in such a personal way, where every detail was considered so that the final experience is fun. Hope you like it!

$3.99
Get it now
In Castle Of Pixel Skulls you play as an animated skeleton that wakes up in a haunted castle. In order to escape you need to overcome challenging levels full of enemies and traps while also racing against the clock to complete the levels as fast as possible. Spikes, fireballs, lava, timed platforms…everything in this castle is trying to kill you – will you have what it takes to survive?

Play through 40 intense and difficult levels in the perfect blend of fun and challenge that was a staple on the arcade classics. Calculated movement, well timed jumps and dexterity are your keys to success!

The game offers a lot of replayability as you can replay the levels in order to try to beat your previous time. So master your jumps, perfect your dodges and you try to speedrun the game in the least amount of time possible!

I’m an indie game developer and my name is Josep Monzonís Hernández. I love creating simple, fun and well designed games. My biggest inspirations are games from the 8-bit and 16-bit era. I like every aspect in the process of making video games: pixel art, coding, game design and drawing. I’ve worked on several indie games in the past – Castle Of Pixel Skulls is one of my last solo developed games and it was in development for about one year.